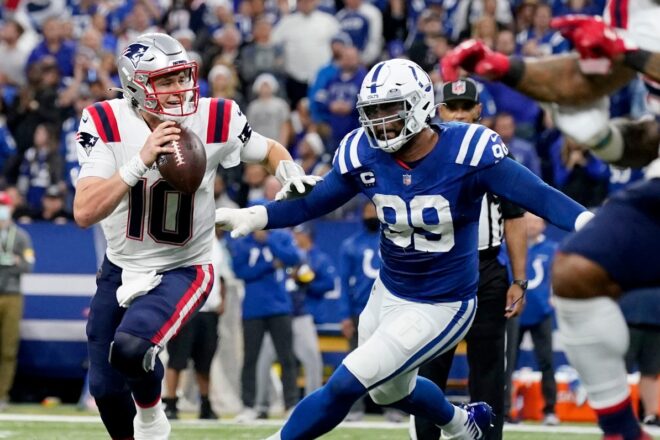 Frank Reich is a good head coach.  Since Andrew Luck got hurt and missed the entire 2017 season, Reich has been playing from behind.  Who had any idea the surgery and rehab were botched and Luck would announce his retirement in camp?  Luck endured through the 2018 season and played well enough to make the Pro Bowl, but he shocked everyone when he retired in camp in 2019.  In March 2020 the Colts signed Phillip Rivers as a stopgap measure.  The last 5 QB’s have been; 2018 – Luck, 2019 – Jacoby Brissett, 2020 -Phillip Rivers, 2021 – Carson Wentz, and 2022 – Matt Ryan.

General Manager Chris Ballard who was hired in 2017, hasn’t done Reich any favors.  He could have taken QBs Jordan Love or Jalen Hurts in the 2020 draft.  They don’t have a Franchise QB they can build a team around.

Sam Ehlinger, the former Texas Longhorn, a 2021 6th round pick,  replaced Matt Ryan last week and played well if unspectacular.  He was 17 of 23, 73.91%, 201 yards, 0 TDs, 0 INT, sacked 2, and a 66.9 QBR.  Not bad for his 1st start.  However, the Colts lost by a point 17-16.  He managed the game well.  Jonathan Taylor got hurt and the running game became non-existent.  Ehlinger ran 6 times for 15 yards.  Expect Ehlinger to run more considering the Patriots have had difficulty with running QBs.  It has been reported that Ehlinger has been picking the brain of former Patriot Stephon Gilmore about how the Patriots set up their defense and particularly the secondary.

The running game received two big blows with the ankle injury to Jonathan Taylor and the trade of receiving back Nyheim Hines.  Taylor also has a knee injury he is dealing with.  He can play with the injured knee and not injure himself further by playing.  He is not the player he was a few years ago.  Deon Jackson has assumed the #2 role but had negative yardage vs the Commanders.  WR Paris Campbell had a 28-yard reverse so look for that kind of play on Sunday.  For the season Taylor has 107 carries for 462 yards, 4.3 YPC, 1 TD, and 2 lost fumbles.  Next up is Jackson with just 30 carries for 100 yards, 3.3 YPC, and 1 TD. It would help if you looked at the O-line to see why the Colts are doing so badly in the run game. They obtained under-utilized Zach Moss in the trade with Buffalo.

The Colts have 3 quality players at TE in Kylen Granson, Mo-Alie Cox, and Jelani Woods.  Granson is in his second season after being drafted in the 4th round in 2021 out of SMU.  He has 20 catches on 26 targets, 176 yards, 8.8 YPC, and 0TDs.  He is a little small at 6’1.5” and 241 lbs.  Mo-Alie Cox is in his 6th season after coming out as an Undrafted Free Agent in 2017.  He didn’t play football in college, he was a basketball player.  The Colts saw enough in him to sign him.  The 6’5” 267 lbs TE hadn’t played football since his freshman year of High School.  He struggled to make the Colts’ roster through injury and waivers he finally made it in October 2018.  Last year Cox was given a 2nd round tender for a Restricted Free Agent.  This year he signed a 3-year $18M contract.  He has 11 catches on 16 targets, for 136 yards and 12.3 YPC, 2 TDs.  Jelani Woods is a player that caught my eye and all the scouts during the East-West Shrine Bowl.  At 6’7”, 252 LBs, he sticks out.  At the combine, he ran 4.61 which got him drafted in the 3rd round by the Colts this year. In limited opportunities, he has 6 catches on 10 targets for 77 12.8 and 3 TDs.  He is a big Red Zone target.  Woods played three seasons at Oklahoma State, converting from QB to TE.  After his third year, he transferred to Virginia Tech for one season.  His first two catches in the NFL were for TDs against KC in week 3.

The Colts want to establish the run so they can use play-action passing down the field.  It is imperative the Patriots stop the run against the Colts.  Matt Judon should be able to continue wreaking havoc on both tackles.

Overall the Defense is ranked #14.  The Patriots are ranked #7.  The Colts can stop the run but didn’t in the month of October.  Having Shaquille Leonard back will help.  Remember it took a near-miraculous catch by Terry Mclaurin to beat them last week.

According to Warren Sharp, there are few players as disruptive as DeForest Buckner.  Bill Belichick was singing his praise in press conferences this week as well, stating that he thinks Buckner is a top 4 DT in the league.  He will give our interior line fits.  He has 21 tackles and 4 sacks.  Look for him to line up against Cole Strange for a huge mismatch.  Hopefully, David Andrews will be back.  Also, Isaiah Wynn has been practicing at LG this week.  He replaced Strange during the Jets game.  That was perhaps Strange’s worst game of the year.  Grover Stewart is the other DT and he is no slouch either.  He leads the D-line in tackles with 43 and has 2 sacks.  Kitty Paye is listed as questionable but I expect him to start at LDE.  The former 1st Round selection #21 overall in 2021 out of Michigan checks in with 16 tackles and 3 sacks. He hails from Rhode Island and played at Bishop Hendrickson HS.  Yannick Ngakoue can apply pressure as well with 16 tackles and 4 sacks.  Old friend Byron Cowart is a reserve DT for Indy.

The Linebacker corp is strong with Zaire Franklin leading the team with 81 tackles. Bobby Okereke is 2 and on the team in tackles with 73.  Former Defensive Player of the Year Shaquille “Darius” Leonard has been quiet with only 6 tackles having missed 6 games.  He should be back for the Patriots game.

The secondary is led by former Patriots’ 2017 Undrafted Free Agent Kenny Moore.  The Patriots wanted to keep Moore but just didn’t have the room on the roster.  The Colts claimed him and he has been a fixture on their Defense.   He has developed so well that the Valdosta State grad made the Pro Bowl for the first time last year.  He finished last season with 101 tackles from his cornerback position.  Moore leads the secondary with 40 tackles.  Another former Patriot, Stephon Gilmore is the shutdown RCB.  He is listed as questionable but I expect him to not miss this game.  Safety Rodney McLeod is second with 38 tackles.  Rodney Thomas is the other Safety.  He chipped in with 20 tackles.  They are not a ball-hawking team and only have 4 on the season.

Punter Matt Haack is the third-worst punter in the league.  Patriot Jake bailey is the worst.

This is a game the Patriots should win at home.  I don’t expect a high-scoring game and the Patriots are going to have to be efficient.  The defense should be able to hold down the Colts’ offense.  Looking at a 17-14 win.

In my observations article, I didn’t give Devin McCourty any praise.  His first interception while staying in bounds was a thing of beauty.   It was great seeing him get two.  He has been a bit slow to react over the course of the season.  My wife even exclaimed during the game that it was the first time she heard his name mentioned all season.

A couple of Practice Squad moves this week with the signings of OL Hayden Howerton and veteran P Michael Parlady.  The 30-year-old Parlady has been with 7 different NFL teams and has played in 72 career games.   He owns a 45.6 career punting average.  Howerton, 23 was signed as an Undrafted Free Agent by Tennessee this spring after having 53 career starts at SMU and was a participant in the East-West Shrine game.  He stands 6’3” 300 LBs and played 98 snaps in pre-season with the Titans.

To make room on the Practice Squad LB Ronn’Dell Carter and K Tristan Vizcaino were waived.