2 months ago at 11:32 am ET
Follow @MarkMorse5
Posted Under: Patriots News 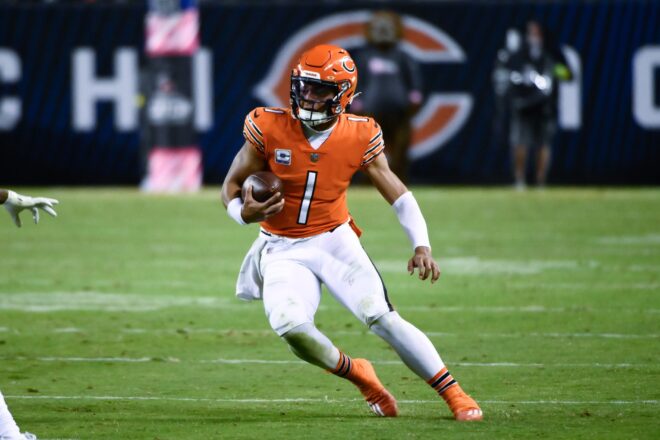 This week’s opponent is the Chicago Bears.  The storied franchise of the NFL is a long way from the old glory days.  The Bears are 2-4 overall but 0-3 on the road.  They do have the benefit of a couple of extra days rest, having played a snoozer on Thursday Night Football last week.  The final was 12-7.  QB Justin Fields has struggled and nobody knows why.

Enter new head coach Matt Eberflus.  The former Defensive Coordinator for the Indianapolis Colts has no Offensive experience in his background.    Eberflus hired two rookie coordinators, a 37-year-old Defensive Coordinator, Alan Williams, and Luke Etsy as Offensive coordinator.   Getsy was the Packers QB coach and passing game coordinator.  He played QB in college at Pittsburgh and then for two years at Akron.  The coach’s inexperience and forcing a new playbook on a 2nd year QB has been very difficult on Fields.  Sound familiar, doesn’t it?

Some interesting insights were provided by Warren Sharp Analysis in his 2002 Football Preview.   Justin Fields started the season well but the brutal schedule the Bears were to face did them in.  Fields missed most of the second half of the season with ankle, hip, and rib injuries.  His struggles from his rookie year have not been corrected and have carried over into 2022.  Teams are blitzing him at a 55% rate.  Mac Jones faced the same pressure but learned to deal with it.  In 6 games this year, Fields’ highest passing yards total was 208 yards.  The Bears are a run-first team with 197 rushes for 1025 yards, 5.2 yards a carry, and 171 yards rushing a game.  They only have 5 TDs and fumbled 7 times as a team, none by RBs but 4 by Fields.  You know the Patriots are a run-first team, compare that to the Patriots’ 178 rushes for 788 yards, 4.4 yards per carry, 8 TDs for 131 yards a game with 3 Fumbles, none by RBs, and the one by Zappe was a strip sack.

The receivers are led by Darnell Mooney who has 17 catches on 33 targets for 241 yards, a 14.2 YPC average, but no TDs.  He is averaging a mere 40.2 yards a game.  Mooney’s game was supposed to step up with the loss of WR Allen Robinson to the Los Angeles Rams.  It hasn’t, but it’s not his fault.  He has great speed (4.38) and runs precise routes.  The knock on Mooney is that he is under 6’ tall and weighs just 176 lbs.  In comparison, New England’s Tyquan Thornton is 6’2” and 183 lbs and runs between 4.21 (u) and 4.28(o) time in the 40.  Mooney’s shortcomings fall upon Justin Fields who just can’t get him the ball.   Dante Pettis, enters his 5th year in the league and Chicago is the third team he has been with since being drafted by SF in 2nd rd (#44) in 2018.  He played two years with the Giants prior to signing with Chicago.  The 6’1 195lbs speedster out of the University of Washington has only 5 catches on 13 targets in 6 games.  He has accumulated 135 yards for a 27.0 YPC average, and 2 TDs.  He is a threat whenever he touches the ball, he just doesn’t get it enough.

Cole Kmet, the golden domer from Notre Dame, is TE’s top target.  Everyone expected a big year out of Kmet, especially with Robinson leaving for Los Angeles in Free Agency.  It has materialized.  He had 60 catches last year and a big jump was expected this season.  He has 10 catches on 15 targets for 116 yards. 11.6 YPC, no TDs, and 19.3 yards per game.  He is vastly underutilized in this offense.

David Montgomery is an excellent pass catcher out of the backfield.  The reliable Montgomery has 10 catches on 11 targets for 113 yards, an 11.3 YPC, no TDs, and only 22.6 yards a game.

The Offensive line is led by two second-year Tackles, Braxton Jones and Larry Borom.  Borom replaced former 1st round pick, Riley Reiff, at RT.  The 6’5” 335 lb Borom was drafted in the 5th round of the 2020 Draft.  Jones is a 5th round selection in this year’s draft and a big surprise.  Their inexperience can sometimes get Fields in trouble especially when teams scheme pass rushes for extra pressure.  On the inside, That’s 4 of 5 linemen drafted in the last three years.  No wonder Fields has been sacked 23 times. Right Guard Teven Jenkins is a big guard at 6’6” and 323 lbs.  The Oklahoma product was also drafted last year in the 2nd round (#39).  Lucas Patrick is at LG.  The 6-year veteran played 5 years with Green Bay before signing a two-year contract in Free Agency with Chicago.  Lucas left the Washington game last Thursday with a head injury but came back to finish the game.  Sam Mustipher has been pressed into action with Cody Whitehair being added to the IR.   He has started all 6 games and has not performed very well.  Chicago Insider says he will be replaced this week by Lucas Patrick.  Patrick has been playing with a cast on his right hand from a pre-season thumb injury.   Ja’Tyre Carter is the primary backup at G.  Carter is a good size at guard standing 6’3: and weighing 311 lbs.  The 7th-round pick (#226) from Southern, an HBCU school needs a redshirt year to get acclimated to the NFL.

The Bears lost a huge part of their Defensive identity when they failed to re-sign former Patriots DT Akiem Hicks.  They also lost DTs Eddie Goldman and Bilal Nicholas.  They wanted to re-sign Larry Ogunjobi but he failed his physical.   Chicago moved on from LBs Alec Ogletree and Danny Trevathan.  They never really got over trading away LB Khalil Mack.  When talking about the Bears’ defense you start with Roquan Smith at MLB.  He leads the team in tackles with 66.   Smith was the Bears’ 1st pick #8 in the 2018 draft.  He has lived up to that selection.  He is a tackling machine.  The former Georgia LB is a two-time 2nd-team All-Pro and was the SEC Defensive Player of the year.  Smith requested a trade from Chicago during the off-season and held out of camp.  He won’t negotiate during the season.  Nicholas Morrow is 2nd on the team in tackles with 46.  Joe Thomas fills the Weakside LB spot.  He was an Undrafted Free Agent with Las Vegas for three years and then signed with Chicago.  He is an undersized LB at 6’1” and 216 lbs.  Joe Thomas was originally signed as an Undrafted Free Agent by Green Bay, he finally cracked the 53-man roster in 2015 after he was signed off the Dallas Practice Squad in 2015.  He re-signed with Dallas on a two-year contract.  He has bounced around the league and was signed back with Chicago earlier in March 2022, cut in training camp, resigned to Practice Squad, and then promoted to the active roster in September.  He is another 6’1” 227 lb linebacker.  They are all the small quick type of LB.   Rookie Jack Sanborn from Wisconsin is a player I liked coming out and has filled a backup role.   Robert Quinn was the second highest-rated DE at Pass Rush Win Rate.   Al-Quadin Muhammad is the other DE.  At DT Justin Jones has 20 tackles, Muhammad 18 tackles, Aaron Watts 17 tackles, and Dominque Robinson 12.   As a defense, they rank 22nd against the run (120 yards per game).  Against the pass, they are ranked 4th.  They are led by rookie Kyler Gorgon at CB with 37 tackles.  The former Washington Huskie, Gordon was a player the Patriots were interested in.  Starting LCB Jaylon Johnson has been ruled out for this game.  Kindle Vildor will more than likely fill his spot.  He has 23 tackles.   Safeties are Jaquan Brisker has 35 tackles, and Eddie Jackson’s 43 tackles lead the secondary.  Jackson is a ball hawk and has 3 INTs on the season.  The Defensive coordinator for the Bears is Allan Williams who brings 30 years of coaching experience, and 21 years in the NFL to the table.  This is his 1st year as Defensive coordinator.  He was the Colts’ Safeties coach for the last 5 seasons.

Trenton Gill is ranked as the #10 punter in the league with a very good 48.7 yards per kick average.   The kicking game is sub-par with Cairo Santos ranked 27th.  In the return game rookie speedster (4.32 40 from Combine) from Tennessee Velus Jones is 28th in Kickoff Returns and 30th in Punt Returns.  The Patriots will have a big advantage on Special Teams.

The Patriots lost Special Teams ace Cody Davis to season-ending knee surgery.  Davis led the team in Special Teams tackles last year.  He was also the personnel protector for the punter.  The Patriots didn’t waste any time finding a replacement for Davis.  They signed WR Raleigh Webb off the Ravens Practice Squad.  Since he was signed from a Practice Squad, he must remain on the 53-man roster for three weeks.  Webb is 6’2 204 lbs and runs a 4,58.  He played his college ball at the Citadel.  He played against the Patriots earlier this season as a special teams player.  He had 2 ST tackles this season and even plated some at Safety in the game versus the Patriots.  The Patriots also made a couple of moves on the Practice squad, waiving K Tristan Vizcaino and signing DE/LB Ronn’Dell Carter.  He is a 6’3” 269 pass-rush specialist.   The Rutgers transfer finished at James Madison and was the Conference and FCS Defensive Player of the Year in 2029.  He has bounced around the league with 7 stops either on the Practice Squad or active rosters before signing with New England.

These stats from Evan Lazar

Bailey Zappe is the 1st rookie QB to win his 1st two starts while posting a QB rating over 100.  In fact, if you include the extended time he played against Green Bay, which would make three straight games with a 100 or better rating.  He is leading the league in QB rating with 111.4.   Zappe was 7 of 8 when running play-action.  This is from a QB who had never taken a snap under center until the Reese’s Senior Bowl.  On these 7 play-action completions he averaged 20.6 ypc.

Mac Jones only had 11 dropbacks while under Center.  He only dialed up 10.8% of play-action passes. Zappe was over 21% of his dropbacks under Center with 31.6% of those being play-action.  I also like how Zappe extends the ball, making it look like a stretch run.  Those stretch run plays are exactly what the zone blocking is for.

QB with 85 dropbacks this season (36 QB qualified), who is the leader in completion percentage over expectation (CPOE)?  That would be Bailey Zappe at +8.9.  He is also the EPA per play (+0.19).

Nick Folk’s kicking streak of 64 straight Field Goals inside 50 yards ended on Sunday.  That was an incredible streak.

No Injuries to Reports

I find the Bears having no injuries hard to believe.  N’Keal Harry will be back in Foxboro and is listed as a Full Participant.