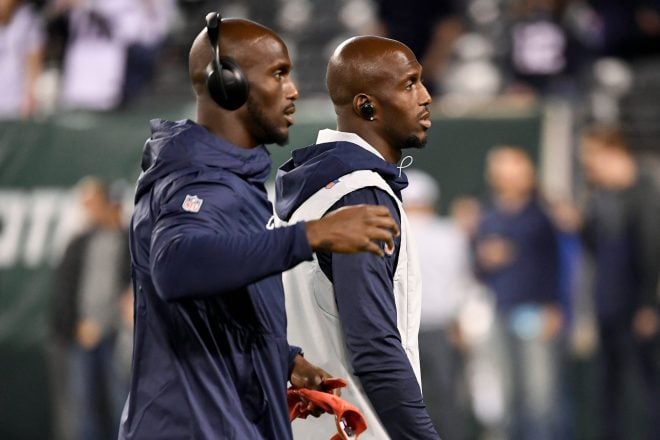 As chatter of a potential quarterback controversy between Mac Jones and Bailey Zappe continues amongst the media, former Patriots cornerback and current NFL Network host Jason McCourty shared a much different stance on the current situation.

“The team loves both of them. They were in there hanging out, laughing and joking,” said McCourty during Good Morning Football on Wednesday.

McCourty had recently spent time with both quarterbacks during a charity event in Boston he and his brother Devin hosted.

As for how the situation compares to Drew Bledsoe and Tom Brady back in 2001? McCourty felt it reminded him more of Robert Griffin III and Kirk Cousins in Washington.

“So for me, I look at this situation, you had the Bledsoe, you had the Brady. But for me, it’s more RGIII and Kirk Cousins because of the fact that, yes, those two guys were drafted in the same draft, but very similar.”

“Mac Jones was drafted with a first-round draft pick last year, and Zappe, I believe, was fourth-round this year. …So now you have Bailey Zappe and you have Mac Jones. You have two guys that solidify the quarterback room.”

McCourty then said he expects Jones to regain the starting job once healthy.

You can listen to McCourty’s full thoughts in the clip below.

Our guy @JasonMcCourty spent Monday night with both Mac Jones and Bailey Zappe.

READ NEXT:
Will Mac Jones Play Monday Night? It Definitely Sounds Like the Patriots QB Could Get the Call
Posted Under: Patriots Video
Tags: Bailey Zappe Jason McCourty Mac Jones