2 months ago at 7:55 am ET
Follow @MarkMorse5
Posted Under: Patriots News 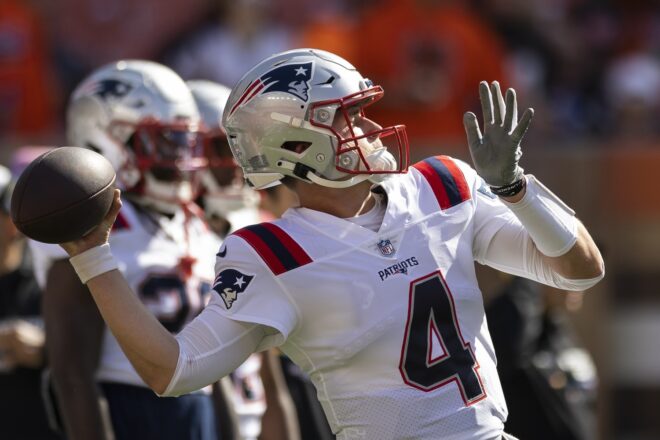 Did anyone see this one coming?  I didn’t!  In my preview, I thought it would be a close game with the Patriots squeezing out a win.  Cleveland’s 4 turnovers sunk them.  If you go -3 in the turnover battle, you are not going to win many games.  The Browns sold out to stop the run and Zappe burned them.  Cleveland wanted to shut down the run and make the third-string rookie beat them, and beat them he did.

Rookie RBs Kevin Harris and Pierre Strong each got their first carries of their careers.  This draft class is beginning to look like a solid group from top to Bottom.  The only one of the ten draft picks not to make a game-day 46-man roster is Andrew Stueber and he is on the Non-Football Injury list and out for the season.

Mike Reiss floated this as the reason Kevin Harris was elevated to the 53-man roster.  Another team approached him to sign with them on their 53-man roster.

The Patriots were hit with multiple injured players again this week.  Kendrick Bourne had a toe injury.  Hopefully, it’s not Turf Toe.  That is a painful and lingering injury that takes a long time to heal.  Christian Barmore was reported to be playing with a knee injury that he aggravated during the game.  He left on his own power and could also be seen doing some drills on the sideline, but he never returned to the field.  Special Teamer and personal protector Cody Davis had a knee injury, with nothing more to report on him.