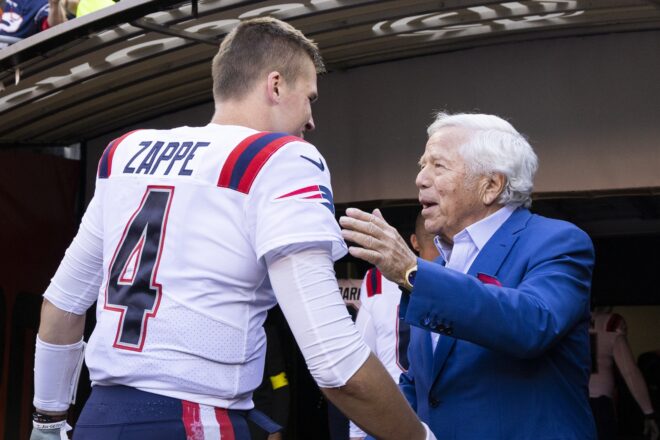 CLEVELAND – Watching the despondent Browns fans file quietly out of FirstEnergy Stadium on Sunday, you feel like yelling at them, “Forget the football game! Beat the Yankees tonight!”

After watching Bailey Zappe continue his apprenticeship in the NFL, Browns fans might take heed, doff all the Dawg Pound garb and head for Progressive Field straightaway. Patriot Nation has no such evening baseball game to look forward to. But what they do have to look forward to is something to talk for hours about.

The Patriots came into baseball-crazy Cleveland and laid a 38-15 pasting on the hometown Browns. The visitors evened their season record at 3-3 as they continue to have success during the soft portion of their 2022 schedule. The Patriots continue their resurgence from the 1-3 bombburst to begin their season, and now look like a powerful and confident team as they move forward towards possible contention in the very tough AFC East, where even the Jets now look like a formidable team.

Whatever spin you want to put on this win, topic A will be this: Whither Mac Jones?

Zappe may soon be unfairly, and we do mean unfairly, compared to Tom Brady in 2001. Drew Bledsoe took that monster hit from Mo Lewis and nearly died from it as we learned later. But that hit changed NFL history. Are we going to say the same thing about Jones and the hit he took from Calais Campbell at the end of the loss to Baltimore?

Right now, the prospect of this is nonsensical and totally unlikely. But it is not laughable. It is worth talking about, even though the prospect of lightning striking the Patriots twice carries about the same probability of a bettor picking Philadelphia, San Diego and possibly Cleveland as three of baseball’s final four teams in the postseason.

Let’s be totally clear: This is still Jones’ team. What we have seen the last two weeks has been enjoyable and refreshing, but not franchise altering. Jones comes from a high powered football factory in Tuscaloosa, Alabama which runs like a machine (they have a similar one in Columbus, Ohio). Jones has played in high leverage college games, including the national championship game. Jones can play on the big stage. Zappe is from Western Kentucky, in the town of Bowling Green (not to be confused with Bowling Green University in western Ohio), and Conference USA will never be confused with the Southeastern Conference.

Jones won a national championship with Alabama. Zappe set NCAA passing records last year for yardage and touchdowns, but this is more like when the Celtics acquired Freeman Williams in 1978, who was the national scoring champion for two straight years at Portland State. Williams never had much of an NBA career despite his gaudy college stats. Zappe has had two NFL starts and won them both, both of them against NFL teams who are not anywhere near the elite level.

But you cannot argue that Zappe is doing one whale of a good job, which has all of Patriot Nation going out for Zappe Hour and is the talk of every pizza place and watering hole across New England.

Zappe once again was masterful in his helmsmanship of the Patriot offense. With very little help from the running game, Zappe managed to complete 24 of 34 passes for 309 yards, two touchdowns, no picks, and a 118.4 passer rating. He was calm and in control the entire game. He threw no ill-advised passes, and only had two real adverse moments. He was the victim of a strip sack late in the first quarter which was caused by Myles Garrett, then had an intentional grounding penalty early in the fourth quarter. Otherwise, it was a very measured and at times exciting performance that helped put his team in position to win the game.

Once again, the defense also shone brightly in the game. The Browns were held to 328 total yards, but were held out of the end zone until midway through the fourth quarter. Former Patriot third string quarterback Jacoby Brissett, who was 1-1 with the Patriots when Brady was suspended for DeflateGate, was only 21 of 45 passing for 266 yards, one touchdown, two interceptions and a 54.5 passer rating. Brissett was sacked four times, and drew lots of boos from the crowd for continued failed offensive drives in the second half.

It was only 10-6 Patriots at halftime, with the Patriots again not being able to convert in the red area. The touchdowns would come later, but the Patriots hung in there until the Browns became more porous and allowed more big plays in the second half. The Patriots were very methodical on both sides of the ball, and even though the game wasn’t truly secured until midway through the fourth quarter, it never seemed like Cleveland was going to win the game. The Patriots forced the Browns into a hail of mistakes and bad plays, and found ample time to make winning plays and played mostly smart football for sixty minutes.

If anything needs Bill Belichick’s attention, it’s bad run blocking and too many penalties. The Patriots were flagged 12 times for 92 yards. Isaiah Wynn was called for a false start in the first quarter, and was finally benched for Marcus Cannon for the rest of the game. Rhamondre Stevenson had a curious game, as he finished with 76 yards on 19 carries and two touchdowns. He averaged four yards per carry, but two of his 19 runs were touchdowns that totalled 37 yards; his other 17 carries averaged only 2.3 yards per carry. Cleveland sold out to stop the run and force Zappe to beat the Patriots through the air.

The Patriots did the same thing to the Browns. They sold out to stop NFL rushing leader Nick Chubb, and they held him and Kareem Hunt to a combined 68 yards on 16 carries (a 4.2 average, which given these two guys is pretty good). They dared Brissett to beat them through the air. To this end, Zappe killed Brissett in this comparison.

Four Patriot receivers had 60 or more receiving yards. Four other Patriot receivers led the team with four catches. Without Nelson Agholor, Zappe was still able to balance his attack very evenly. Jonnu Smith had the longest reception for 53 yards. Tyquan Thornton, a rookie like Zappe, had a nice breakout game with four catches for 37 yards, and had two touchdowns, one rushing and one receiving.

Belichick has now tied George Halas with coaching victories with 324 wins, which is second behind former Baltimore and Miami head coach Don Shula. Belichick won in front of his former fans, as he was the last coach of the original Browns from 1991-95 before they moved to Baltimore and became the Ravens. Combined with Bob Kraft getting married to his longtime girlfriend Friday night, this was a great weekend all around for the Patriot football family.

Time to move on. If you were a Patriot fan in Cleveland at today’s game, you would have been obliging to the local fans if during garbage time, you began a derogatory Yankees cheer. Browns Nation has a much bigger game to chew on tonight, which will draw the attention of most every New England sports fan. The Patriots are on to Chicago, but let’s hope the Guardians are on to Houston after tonight.

READ NEXT:
Five Thoughts on the Patriots’ Win Over the Browns: Zappe Did His Job
Posted Under: Patriots News