2 months ago at 11:25 am ET
Follow @IanLogue
Posted Under: Patriots News 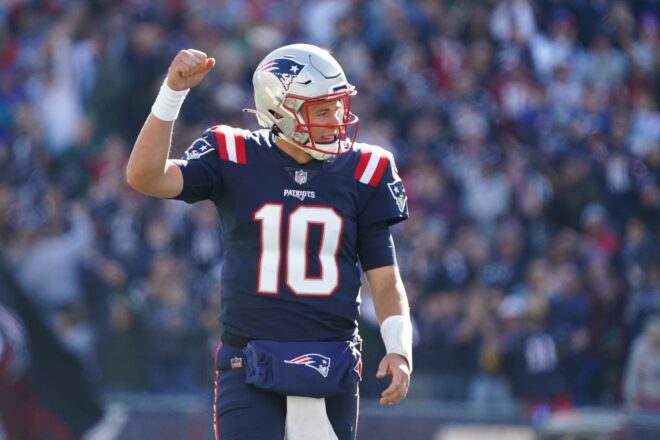 We’ll likely learn a lot about Mac Jones in the coming weeks.

Jones, who suffered a high-ankle sprain during New England’s week three loss against Baltimore, has had to spend the last two games as a spectator while seeing Bailey Zappe thrust into the spotlight after Brian Hoyer went down just 10 minutes into their match-up against the Packers two weeks ago.

Things certainly haven’t gone quite to plan. When Jones got hurt, the hope initially seemed to be that Hoyer would keep the team afloat until Jones got back.  Instead, Hoyer went down and we’ve seen Zappe come in and play well enough that they nearly pulled off the upset in Green Bay and obviously dominated the Lions on Sunday.

Now Jones finds himself in a situation where any missteps when he returns will likely put him under the microscope with the prospect of listening to boos and chants of “Zappe” raining down on him by fans at Gillette Stadium who have quickly become enamored with the former Western Kentucky standout.

Mike Reiss of ESPN said on 98.5 The Sports Hub this week that he believes Jones is about halfway through his recovery, which will likely mean it’ll be Zappe who gets the nod again on Sunday against the Browns while Jones continues getting healthy.  Another strong performance in Cleveland would likely continue the chatter that’s already started, which potentially sets up an interesting situation when Jones gets back under center.

It’s just another example of how quickly things can change in the NFL.

For the Patriots, it’s a good problem to have.  You’ve got two players who are obviously capable of playing quarterback in a league full of teams who are in desperate need of one.

A lot of teams go decades without finding a competent signal-caller.  New England appears to have two pretty good ones sitting on their roster just two seasons removed from losing the best player of all time.

But Jones is definitely in a different place than he was a couple of weeks ago. Hoyer’s injury opened the door for Zappe’s emergence, and it’s essentially eaten into all the currency Jones had built up prior to his injury.  Worse, it’s allowed the doubt to creep in among fans who are starting to believe his job should potentially in jeopardy.

Obviously, the opinions of fans are one thing, but Bill Belichick has also talked about turnovers quite a bit over the last week and praised Zappe for the fact he hasn’t turned it over.  The lone interception on the stat sheet by the rookie quarterback came on a slant pattern Sunday to Nelson Agholor, who saw the ball glance through his hands and get knocked back into the air, which resulted in the turnover.

That one wasn’t exactly Zappe’s fault, since he put the ball right on the money but Agholor couldn’t haul it in.

Meanwhile, Jones had five interceptions prior to his injury, four of which came while targeting DeVante Parker.  It’s a unique situation, and you have to wonder what Jones is thinking these days now that he’s had some perspective coming off of what was likely a nightmare of sorts during those first three games. 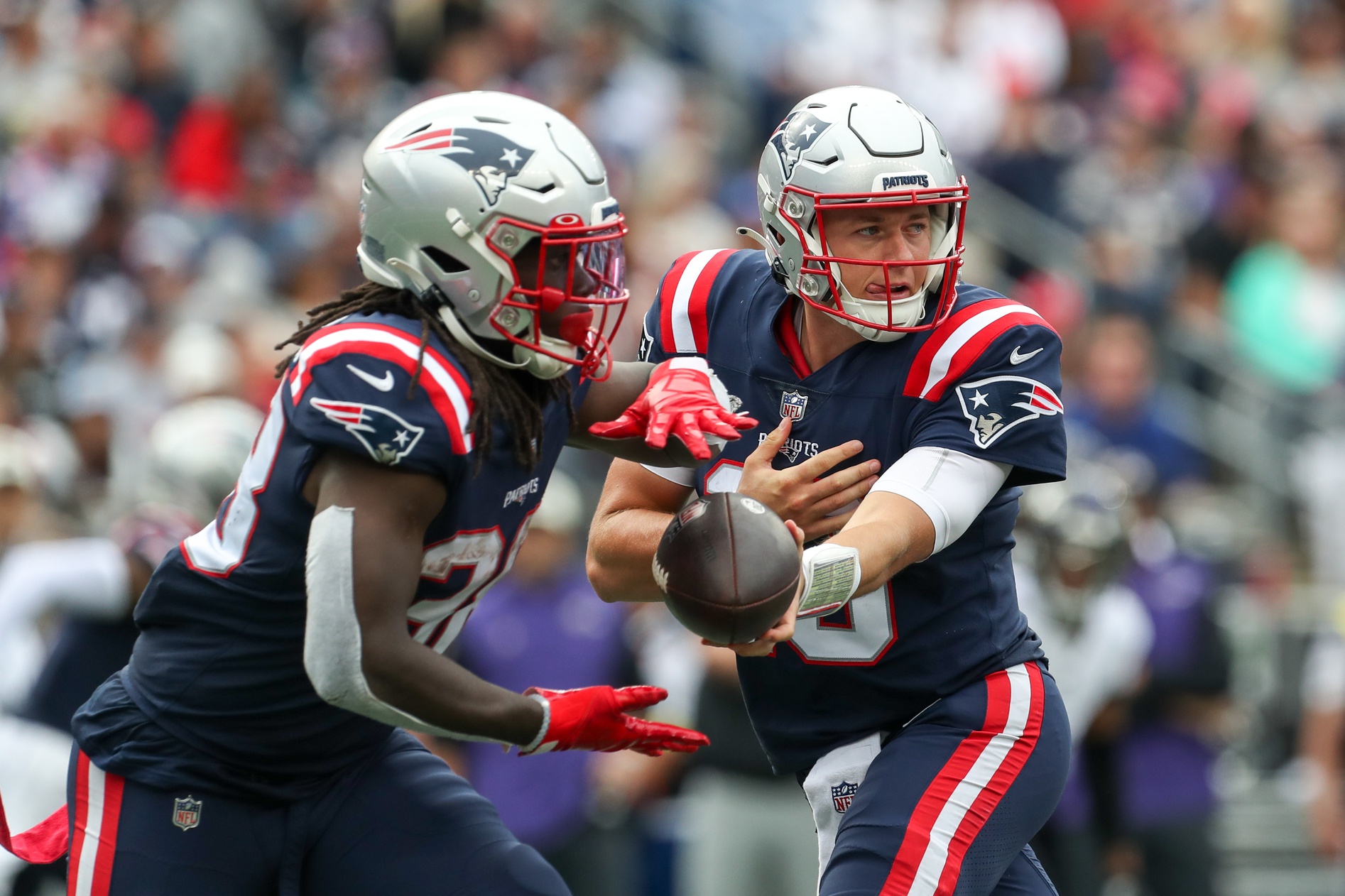 Things have changed quite a bit since the last time Jones was out there. (PHOTO: Paul Rutherford-USA TODAY Sports)

Things on offense have also changed quite a bit since that week three debacle.  The offensive line has slowly started putting things together, and Zappe didn’t find himself under much duress last weekend.  The ground game has improved, and Matt Patricia has called a significantly higher number of play-action passes compared to when Jones was out there.  Those plays had been a staple of Jones’ game and his success and they were sorely lacking through the first few weeks.

So there are clearly reasons for Jones to thrive when he does come back.  But either way, the pressure is now on, which shouldn’t be anything new for him.  He’s no stranger to people doubting him, and it’s amazing how he’s essentially right back where he started after just a few weeks.

Still, some of the parallels between these last two seasons can’t continue.   Through five games last season he had five interceptions, and he’s already hit that number through three games this season.  Like last year against New Orleans, Jones threw three interceptions against Baltimore, the same number he threw in a loss to the Saints.

Unlike last year, Jones hasn’t been able to just turn the page and move on.  The then-rookie went out and completed nearly 80% of his throws along with two touchdowns the following week as he went toe-to-toe with Tom Brady and the Buccaneers and nearly pulled off the win.  He hasn’t had that moment of redemption yet due to getting hurt.

Needless to say, as Jones continues recovering, he’s likely aware of the position he’s in.  We already know he’s a mentally tough kid, but at the same time, he’s also going to have to get a handle not only on the turnovers but also on his emotions.  His former coach, Nick Saban, used to call him John McEnroe, with the former tennis star widely known for his outbursts on the court when things didn’t go his way.  Saban would often ask him, “You gonna slam your racket today?” when things didn’t go his way in practice.

That was an area where Saban used to give Jones a hard time because he would let bad plays get to him and would lose his composure on the sideline.  We’ve already seen glimpses of that here, so it’s something he’ll need to continue to work on.

But he’s a player who knows what it takes to play at a high level, and his chance at redemption will be coming as soon as his ankle will allow it.

Unfortunately, Zappe’s play has raised the stakes and how Jones responds will definitely be one of the biggest stories to follow when Jones’ season eventually resumes.