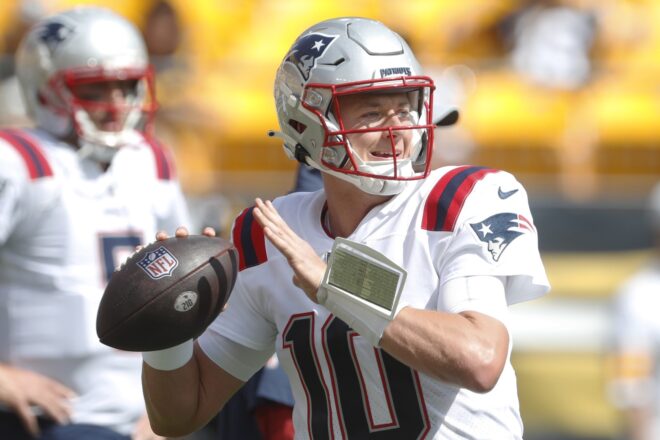 After missing the last two games while nursing an ankle injury, quarterback Mac Jones was spotted throwing at the Gillette Stadium practice fields Wednesday, but what does it mean for his chances to be back in game action?

During his press conference Wednesday, head coach Bill Belichick didn’t provide much of an update.

“We’ll see,” Belichick said when asked if Jones will reclaim the starting job once healthy. “I don’t know.”

When then asked if Jones’ ankle is healing enough to warrant a return against Cleveland, Belichick declined to comment.

“We’ll see what it looks like today and go from there”, Belichick responded.

The local Patriots media later shared some footage of Jones’ practice over Twitter, where it appeared Jones was moving much better on his ankle.

Mac Jones (moving much better this week) and Bailey Zappe throwing early at #Patriots practice. The club had 100 percent attendance (including Damien Harris) at the start of the session. pic.twitter.com/3sKuj9jCWZ

Mac Jones was definitely moving better today than he was last week. Progress there.

But Bailey Zappe worked with the O-line during an early sled drill, which usually is the starting QB’s responsibility. pic.twitter.com/mWvuVGrufg

According to ESPN’s Jeremy Fowler Wednesday morning, a report in his daily column said that Jones has a “decent chance” to play and “appears to have avoided long-term issues or the need for immediate surgery” in regards to the ankle injury.

By Wednesday afternoon, NFL Network’s Mik Giardi tweeted out that Jones’ swelling has reduced to a point where his injury could be “managed” enough.

A quick Mac Jones update. Per sources, if the #Patriots 2nd year QB were to play this weekend, he's be dealing with some instability in that ankle but, depending on how it progresses this week, it *could* be managed in a variety of ways. The swelling, I'm told, has decreased.

As it stands, it remains to be seen what the Patriots decide to do, but there is plenty of progress.