2 months ago at 7:06 am ET
Follow @SteveB7SFG
Posted Under: Patriots Commentary 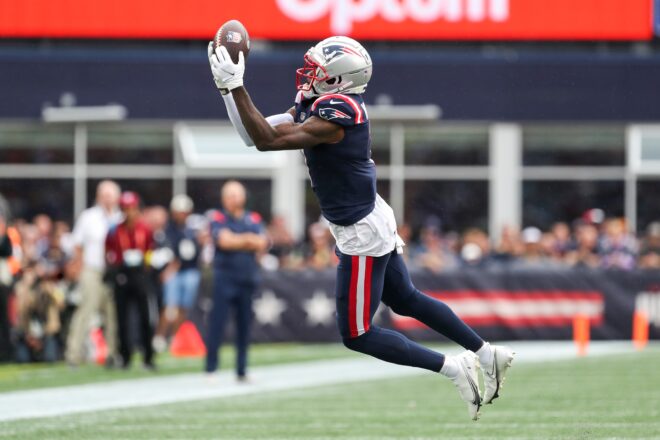 For much of the day, Sunday’s matchup was exactly what we expected from a Patriots-Ravens game. Like so many previous games, it was a tough, hard-fought, physical affair with each team going through ebbs and flows.

But it was Baltimore who pulled away in the fourth quarter as Lamar Jackson was the big difference; the Patriots had no answer for him in the 2nd half, as he continuously scorched the defense. And mistakes doomed the offense, as they lost 37-26, falling to 1-2 on the season, and having Mac Jones suffer an ankle injury on the team’s last offensive play.

Despite the final score, the game was there for the taking, even in the last 5-6 minutes of the contest, but until they cut down on mistakes, they can’t beat the better teams in the league.

Some game observations from earlier today include:

Lamar Jackson took a close game and, like he’s done many times, put the game on his shoulders, carrying the Ravens to a victory. Jackson accounted for five touchdowns, four passing, and one rushing, as he looks to be an early season MVP candidate.

Ravens coach John Harbaugh said that it was Jackson who took over and was the difference. And he certainly was. Jackson completed 18-29 passes for 218 yards, with four TDs and one INT for a passer rating of 110.3. He ran for 107 yards on 11 carries with another touchdown.

Once he took over, Jackson got the Ravens’ skill position players in the position to make big chunk plays which is a big part of their offense. He was excellent.

From the first offensive snap of the game, Parker, who had just one catch for nine yards in the first two games of the season, showed he was going to be a big factor in the game.

Parker connected with Jones for 31 yards, setting the tone for the day. On the second drive, he and Jones connected for 40 yards, but a holding penalty wiped out a promising drive forcing the offense to settle for a field goal.

Parker added a 36-yard reception, this time leading to a touchdown early in the 3rd quarter. He added a 24-yard reception on another touchdown drive. Parker finished with five catches for 156 yards, showing his ability to go up and get the 50/50 passes he was brought in for.

Patriots Had No Answers For Mark Andrews:

Andrews is one of the best all-around tight ends in the league, especially in the passing game. And he showed why on Sunday. He consistently burned the Patriots’ linebackers and safeties for 8-89 with two TDs on the day.

In our pregame matchups, we said the defense had to contain Jackson and try to take away Andrews in the passing game. In the end, they couldn’t do either, despite some excellent defensive play in spurts, and that is why Baltimore put up 37 points. Justice Hill was very impressive in the running game as well.

Deatrich Wise Continues His Torrid Start of the Season:

Before the season started, the team made Wise, who is entering his 6th season, a captain. It was a bit curious at the time, but the coaches raved about the improvements he made this offseason. The faith they showed in him was very well placed.

Wise has been the Patriots’ best player on the defense this year. They game-planned to be aggressive against Jackson on the day, and Wise answered the call. He sacked Jackson three times, added three QB hits, and had three tackles for loss (TFL).

Wise has been striving for better consistency and to be better conditioned this year, and he has, after the first three games, seems to be making great strides in both of those areas.

If, before the game, I said that the offense would rush for 145 yards and Mac Jones would pass for over 300, you’d probably say that the Patriots would be in a great position to win the game. And they were…before they were not. The big issue continues to be mistakes that kill drives. Pre-snap penalties, interceptions, and fumbles are holding back the offense from reaching a spot where they are able to beat good teams.

Things were looking up for a time. After Baltimore went on an impressive drive taking a 14-10 lead with just 30 seconds left in the half. Mac Jones took the Patriots on an impressive drive where Nick Folk drilled a 50-yard field goal to make it 14-13 at the break. Then, on the second half’s first drive, the offense double-dipped, going on a nice drive to make it 20-14.

That’s when things began to go awry. Baltimore scored twice, making it 28-20, Mac Jones threw a pick that the Ravens added three more as Justin Tucker made a 56-yarder look like a ho-hum chip shot. Tucker is the best kicker that I’ve ever seen. And the man can sing too…However, I digress.

Now 31-20, the offense again showed good resilience going on a nine-play 75-yard drive capped off with a Rhamondre Stevenson touchdown run, the two-point conversion was no good, and it was 31-26.

Jonathan Jones then forced a fumble on Baltimore’s first play, and New England took over at the Ravens’ 39-yard line. They drove to the Ravens’ 10, but Jones’ throw to Parker in the end zone was picked off. But the defense held and forced a punt.

With 6:32 left in the game, the Patriots took over with a chance to take the lead. On third and six, Jones hit Nelson Agholor with a 29-yard pass to the Ravens’ 39-yard line but was stripped of the ball, and Marcus Peters recovered just inbounds.

Baltimore wasn’t letting them off the hook again. Jackson hit Rashod Bateman for a 35-yard gain; he then ran for 20 to the New England nine-yard line. He then ran it in from there, making it 37-26. Tucker then hit the upright…what? But it was then“Thank you for coming to Gillette Stadium; please fold your tray tables to their upright position, and don’t forget your possessions on the way out.”

You can’t turn the ball over to a very good team four times and expect to win. That is inexcusable. Now we wait to see how badly injured Jones is.

By: Bob George
If the fact that the Patriots actually forced the Buffalo Bills into three punts is the only real positive of the game, you more or…
2 hours ago