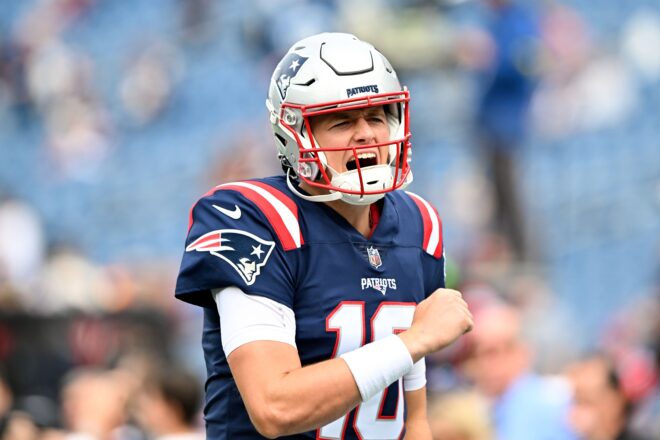 Some thoughts following the New England Patriots dropping a frustrating one to the Baltimore Ravens on Sunday:

1) These first three games have remained frustrating when it comes to the offense and results aside, it’s even more aggravating when you look at the play of Mac Jones.  Sunday’s outing saw some moments where Jones made some of his best throws so far this season, including a couple of passes that had more zip than we had seen to this point.

We saw a lot of the accuracy and touch Jones had displayed at various points during his rookie season, which appeared to be a sign that we’d possibly see him turn a corner.  Instead, the early success he had with DeVante Parker went to either his or offensive coordinator Matt Patricia’s head, and they instead started over-targeting him.   That strategy worked out badly and led to the exact same results we saw through the first two three weeks.

Obviously, you can point to the 156-yards of offense Parker put up on his 5 receptions, which was an average of 31.2 yards per catch.  But what quietly got lost on Sunday was the fact it came on 10 targets, leading to a 50% completion rate with two of those targets ending up in the hands of Baltimore’s secondary.

It could actually have been worse.  Patricia called a questionable play down on the goal line at the beginning of the third quarter that was nearly a disaster.  Instead of running the ball on 1st-and-2, he called a pass play to the left flat to Damien Harris that was tightly covered and Jones threw it slightly behind him, with the ball nearly being picked off.  Had that one been intercepted, it likely would have been returned 98-yards the other way for a touchdown.

Fortunately, Harris scored on a 2-yard run on the next play and they avoided disaster.  While Jones’ throw wasn’t perfect and that part can be put on his shoulders, the fact he was in that position to start with raises a few eyebrows.

2) The fourth down play call on Sunday was also maddening.  The call involved both Parker and Bourne, with Bourne running a quick out toward the flat while Parker went through both defenders and was open behind them.

Instead, Jones threw it to Bourne, who was well short of the marker and was dragged down for no gain.  While people can question the decision by Jones to throw it there, you have to wonder if the call essentially forced him to go that way.

That’s been the thing that feels different this season.  Last year, it felt like Jones had options and was able to use his head to get out of bad situations.  This year, it feels like that isn’t the case.

We’re seeing enough where it’s safe to begin questioning the offensive philosophy and the calls.  The contrast is simply too different and Jones is too smart to be making these kinds of decisions.  The question now is whether or not the freedoms he had last year aren’t the same, or if there’s a different issue.  But something feels off when it comes to how things are operating.

3) Staying with the playcalling, the numbers from last season to this point are somewhat telling.  Through three games in 2021, the Patriots had five receivers with 10 or more receptions.

So far this season, that total is just two (Jakobi Meyers – 13, Nelson Agholor, 11).  That essentially tells you a lot of what you need to know in terms of where the targets are going.

DeVante Parker sticks out like a sore thumb on the stat sheet.  Jones has targeted him 14 times, which ties for second on the team with Agholor who also has 14, yet they’ve connected on just six throws and he’s been picked off four times.

That is absolutely unacceptable.

Again, while Parker showed on Sunday that he can have his moments if they pick their spots, forcing the ball his way clearly doesn’t work if he’s not open and it needs to end.  You can blame Jones for pulling the trigger, but we saw enough out him last season to realize he’s smarter than he’s been and there seemingly has to be some pressure from the coaches to make the throw rather than make a different decision.

And why we’re not seeing other players more involved is a little mind-boggling.  To provide a little perspective, through three games in 2021, both Hunter Henry and Jonnu Smith each had 10 receptions.  The two are each below that total to this point, with Henry’s total being the most surprising.  Smith’s receptions did jump on Sunday after he hauled in a perfect 4-of-4 for 25-yards and he currently sits with 7.  But Henry has just 3 receptions on only 5 targets and so far he hasn’t been utilized quite as well compared to last season.

Why that is, it’s hard to say.  He and Jones are neighbors and they’ve admitted in the past they spend a fair amount of time off the field working on things.  So this is clearly either an internal decision, or a frustrating oversight.

Either way, every game to this point has felt like a grind compared to what we saw early on last year and the fact they’ve already lost two winnable games is going to sting down the stretch, especially now that Jones may be sidelined for the foreseeable future.

4) For now, it’s going to be a tough stretch for a team that just had the rug again pulled out from underneath them.  When Jones eventually does come back, changes need to be made if they have any hope of at least salvaging the season.  That may simply mean seeing Jones and the offense make some progress, because they’re going to have a difficult time making up ground with an AFC Conference that seems to be getting away from them.

Where things will go from here is obviously the biggest question.   But it just feels like we’ve watched someone who was smart with the football end up forced into a seemingly unneeded regression and he’ll also be the one who will bear the brunt of the criticism over the next however many weeks until he’s able to get back on the field and get some redemption.

The only question by then could be whether or not it’s too late for a team that is about to potentially endure a rough stretch without him.

5) Defensively, the Patriots did about as much as they could against the Ravens, who obviously ended up with a big performance from Lamar Jackson.  They did about all they could to contain him despite the fact he fiished with 11 carries for 107-yards along with a touchdown running the ball, as well as four passing touchdowns.

After all, they forced a couple of turnovers, especially late in the game which gave New England multiple opportunities to come away with this one.  But an injury to Lawrence Guy absolutely killed them upfront.  For a group that largely had controlled Baltimore’s ground game in the middle, Baltimore clearly smelled blood and went after that spot repeatedly down the stretch, which was just brutal to watch.

Guy has quietly been one of their key players inside next to Christian Barmore, and his status is also one worth watching heading into next Sunday’s match-up against the Packers.  Green Bay comes into this contest 8th in the league in rushing yards, and they’re 9th in average rushing yards per game with 127.

If he can’t go, it creates yet another problem for a team that already has enough to deal with.  But it’s disappointing that we probably won’t get to see what Jones may have been able to do against Aaron Rodgers, and now we’ll also be left having to wait quite a while until the next time #10 is able to get back out there.

Other quarterbacks have pointed out that being forced to watch has ended up providing some needed perspective.  Let’s at least hope that ends up being the case for Jones, who will hopefully be the better for it when he eventually does return.

The regression squarely is on Jones whether throwing to the wrong person or the wrong place or at the wrong time. That is up to him not the coaches or play design. Recognition, reaction and accuracy are the primary keys to QB success. Jones is showing no consistency in any of these areas. This season likely is lost because being a contender this year required a Jones jump, which did not happen and now will not happen.