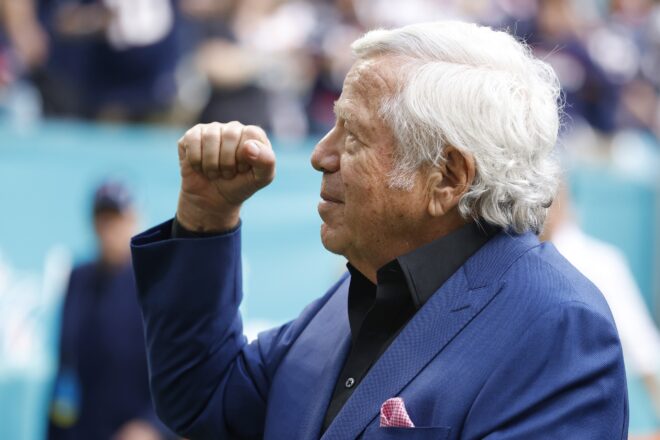 Since purchasing the New England Patriots in 1994, Robert Kraft has seen plenty of winning while overseeing the franchise.

Sunday’s game against the Pittsburgh Steelers marked Kraft’s 500th game as the team owner and it couldn’t have been more fitting that his team also came away with their first victory of the season to celebrate the milestone.

“I think it’s fitting that this one comes on Mr. Kraft’s 500th,” Belichick said as he handed over the ball to a round of applause by the players.

You can check out the moment and Kraft’s follow-up speech to the team below.

Prior to Sunday’s game, a few Patriots reflected upon Kraft’s 500 games and what his legacy means to them.

“That’s unbelievable,” Special teams captain Matthew Slater said. “When I think about Mr. Kraft, his legacy goes well beyond just here in Foxborough. I think it extends throughout the NFL. Just what he’s done for this league, the career he’s had as an owner, and what he’s been able to accomplish with this organization. Really, it’s just another notch in the belt for him. Congratulations to him. But 500, that’s a lot of football games. He’s very invested in people. I haven’t played for any other owner, obviously, but just the intentionality with which he tries to connect with his players really says a lot. We know we have an owner that cares about the people here and wants to provide an environment where winning on the field is important, but winning off the field and winning in the community — things like that are just as important.”

Running back Damien Harris also shared some thoughts about Kraft’s impact on the team and community.

“What incredible honor to be a part of such a special game,” Harris said. “Not only for our history as a team, but the history of the league as well. RKK has been an incredible pillar of success within the community and within our organization for his leadership, the way he gives back, the inspiration that he gives others — everything that he does, not only for our football team and our organization but for the community and the fans as well. It’s obviously a huge milestone and congrats to him.”