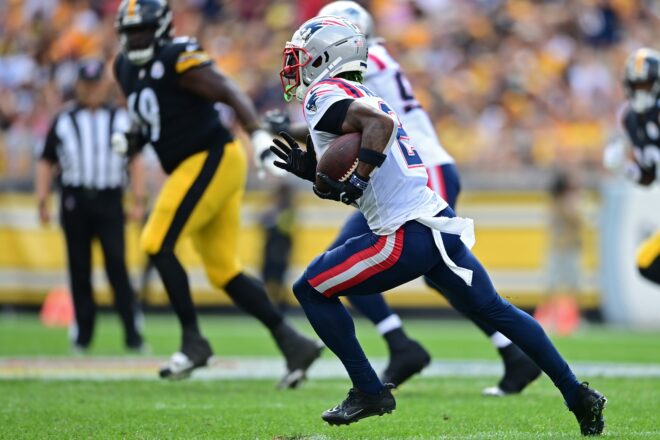 PITTSBURGH – After looking like meek division tailenders last week at Miami, the Patriots came into hostile territory and emerged victorious. The Pittsburgh Steelers are also not what they used to be, as they enter the post-Ben Roethlisberger era with lots of question marks. But the Patriots engaged the Steelers in a tough battle with the home team and came away with a hard-fought and well-earned 17-14 win on Sunday at Acrisure Stadium (how in the world did Heinz lose naming rights?).

A strong rushing attack in the fourth quarter sealed the win, but Mac Jones looked more comfortable for most of the afternoon and piloted a much better offensive attack. There is still much more to fix, especially in the passing game, but the fact that the Patriots were able to stand toe to toe with the Steelers on the road and put the game away with punishing and ultimately fatal rushes on the final drive of the game should make all of Patriot Nation smile.

It should be said that the Steelers are in the midst of a quarterback controversy. The Steelers look like they are willing to go this year with Mitchell Trubisky at quarterback. The Steelers drafted quarterback Kenny Pickett, who played locally for the Pitt Panthers in college, and it is obvious that Mike Tomlin wants Pickett to do a year’s apprentice much like Patrick Mahomes did in Kansas City. The fans were chanting “Kenny! Kenny! Kenny!” all throughout the fourth quarter, but Tomlin did not put Pickett in. In the end, Trubisky was not able to deliver late in the game despite having some success hitting receivers on sideline patterns throughout the middle of the game.

For the second straight game, the opening offensive possession for the Patriots was very good, but did not end in a touchdown. Jones led the Patriots all the way to the Pittsburgh ten-yard line, along the way hitting Jakobi Meyers and Nelson Agholor on consecutive 16-yard pass plays (which were the identical play, left sideline passes). But a delay of game penalty helped cause the drive to stall, and Nick Folk kicked a 28-yard field goal to put the Patriots up early.

The ensuing Steeler drive ended in an interception. Trubisky drove Pittsburgh to the Patriot 42, then tried to force a seam pass to Diontae Johnson. Mack Wilson tipped the pass before it reached Johnson, and the ball fell into the arms of Jalen Mills. Mills was burned several times later in the game on sideline passes, including a two-point conversion later in the game; this play was more opportunistic than it was a great play. It was mostly an ill-advised throw by Trubisky than anything else.

Jones gave the ball right back on the ensuing drive. Three plays later, Jones tried to hit DeVante Parker in a deep post pattern, but Minkah Fitzpatrick jumped in and snared the ball for the interception. This is the second straight game that Jones has tried to hit Parker into double coverage and Parker lost the jump ball. Jones targeted Parker twice in the game, and misfired both times. It is clear that these two players are not on the same page, but that is something that should eventually be cleared up as the season goes forward.

The Steelers got the ball back and drove to a tying field goal. The drive was helped by two long third down conversions. Both were left sideline passes, a ten-yarder on third and ten and a 17-yarder on third and 17. Both passes were to Johnson, the first was defended by Jonathan Jones, the second by Mills. The Patriots tend to like to play off receivers and give up underneath throws; in this game, these were the only passes that Trubisky could complete with any consistency.

Just before halftime, Jones managed to toss a 44-yard touchdown pass to Agholor to give the Patriots a 10-3 lead at intermission. Agholor beat Ahkello Witherspoon on a right sideline pattern, outjumped him and sprinted the rest of the way. This is a play that everyone presumed would go to Parker, and hopefully it soon will.

It set the Patriots up for the double score, but all the Patriots could get to open the third quarter was a 52-yard field goal attempt by Folk which barely missed wide right. A false start on Isaiah Wynn helped kill that drive. The Steelers responded with a field goal from Chris Boswell from the same distance that Folk just missed.

The Patriots got the ball back, drove to their 43, then punted. Old friend Gunner Olszewski muffed the punt, Brenden Schooler recovered, and a penalty set the Patriots at the Pittsburgh 10. Damien Harris covered all ten yards on the ground, and the Patriots had a 17-6 lead late in the third quarter. But Pittsburgh answered with a touchdown on the first play of the fourth quarter on a slant toss to Pat Friermuth and a two-point conversion to Johnson (a left sideline pass with Mills covering).

The fourth quarter turned into a defensive stalemate. Both teams exchanged two punts, with the Patriots unable to take advantage of field position at midfield after the first Steeler punt.

There was 6:33 left in the game when the Patriots took over at their own 30. They never gave the ball back. Jones was able to hit Lil’Jordan Humphrey and then scrambled for five yards for a first down on the first series. From then on, it was all on the ground. Rhamondre Stevenson ran for six and eight yards, then Harris rumbled for 16 yards. After the two minute warning, Harris ran for nine yards and five yards as Pittsburgh spent their final timeouts. By then, the Patriot offensive line had complete control of the game when it was victory formation time.

Jones was 21 of 35 for 252 yards, one touchdown, one pick and a 79.7 rating. Harris and Stevenson had a combined 128 yards rushing and a 5.3 yards per carry average. Agholor had 110 yards receiving and a touchdown, while Meyers led the Patriots with nine catches. A name that came up a lot during the game was rookie Cole Strange, with some nice run blocks and beginning to show why he was taken in the first round.

Meanwhile, Trubisky was 21 of 33 passing for one touchdown, one pick and a rating of 73.8. The Patriots did a great job on Najee Harris, who was held to only 49 yards rushing on 15 carries and a 3.3 average. Johnson led the Steelers with six catches for 57 yards.

The Patriots host a shellshocked Baltimore Ravens team next week for their home opener. Baltimore got spanked by Tua Tagovailoa and the Dolphins at home, giving up 28 fourth quarter points in a shocking 42-38 loss. Baltimore is another tough AFC North team, and will be bent on redemption for blowing such a big lead at home. The Patriots can take how well they handled the physical Steelers on the road and should be ready for Lamar Jackson and company.

The Patriots are in a much better frame of mind now versus last week. Belichick was very praise worthy at his postgame presser. The coach, who is now within two wins of tying George Halas for second most coaching wins in NFL history, has to feel a lot better.

I know Watt didn’t play, but still, excellent work from the o-line. If our starting 5 stay healthy the Pats can have a great season.

By: Mark Morse
Coach Dan Campbell has the Detroit Lions working hard and together as a team despite a rash of injuries.  Don’t dismiss their 1-3 record.
9 hours ago