3 weeks ago at 9:41 am ET
Follow @IanLogue
Posted Under: Patriots News 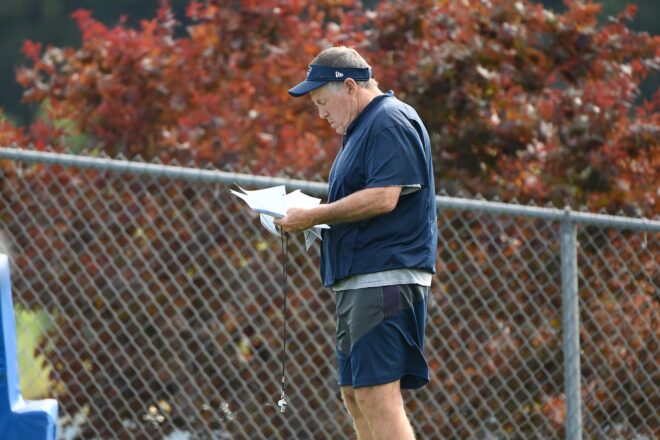 1) The New England Patriots turned the page to the Pittsburgh Steelers on Wednesday as they get set for Sunday’s showdown in the Steel City, and judging by the video from various reporters who were at Gillette Stadium, all appears well with quarterback Mac Jones.

Jones is coming off a rough start down in Miami.  The second-year quarterback got knocked around repeatedly on Sunday, including a tough hit he took late in the game that resulted in the quarterback heading to the X-Ray room after the game with an apparent back injury.

Fortunately, despite the scare, the 24-year-old seems to have recovered well and admitted he was feeling better, as well as not appearing hampered during the media portion of practice Wednesday.

“It feels good,” said Jone.  “Everything feels good. Just keeping it warm and throwing the football.”

Overall, Jones played relatively well in Week 1 despite some of the issues they faced.  He completed 70% of his throws, connecting on 21-of-30 passes for 213-yards along with a touchdown and an interception.

This is a key week for the Patriots, who at 0-1 head into what will likely be a tough road environment in Pittsburgh against a team that was relentless in Week one in Cincinnati.  They forced four interceptions against Joe Burrow, bringing pressure all game long as they hit him 11 times and sacked him on 7 of those.

Jones knows they’ll be a tough challenge and the goal now is to make sure they get the issues they had Sunday in Miami corrected heading into this match-up.

“I think it’s a super talented defense. Play a lot of different coverages, definitely fly to the ball,” said Jones.  “Obviously, Minkah [Fitzpatrick] does a great job. I had some experience, he was my former teammate at Alabama, and I have a lot of respect for him and all the guys on their defense. He makes a lot of plays out there.”

“They’ve got playmakers all over the field. It’s a really good defense to kind of go against. We don’t get to play against them a lot, but just got to be ready to go and correct the things we want to correct and focus on ourselves.”

2) Bill Belichick noted during his press conference that the Steelers’ defense is going to be tough, pointing out that a lot of the success they had Sunday stemmed from the fact they played a good complimentary game and obviously ended up with positive results, thanks to that effort.

“They had a couple of big plays on the pass rush, strip sacks, sacks, [T.J.] Watt had an interception, batted the ball down.  Then their coverage was good. Most of it was zone coverage,” said Belichick.  “They broke on the ball well. Had a couple very good athletic intercepting plays, got their hands on the ball and finished them. Obviously, [Minkah] Fitzpatrick’s return for a pick-six there on the second play of the game which was set up by [Cameron] Heyward’s sack on the first down put them at second-and-long.”

“So just overall a good complimentary defense. Linebackers were fast. They have a good front. They play a lot of people. Their secondary is kind of a ball-hawking secondary. They go after the ball, read the quarterback well, do a good job of breaking on the throw and closing space quickly.”

Reports so far have indicated that linebacker T.J. Watt is expected to miss some time after suffering a pectoral injury, which will likely change Pittsburgh’s approach somewhat.  At the same time, Belichick also mentioned that despite the loss, the Steelers have plenty of other players to work through it.

“Look, they’re a good defensive team. They’re obviously better with [T.J.] Watt, but it is what it is,” he said.  “I can’t imagine they’re going to revamp their whole defense in one week. I don’t know why they would. They play a lot of people anyway. They played a lot of people in the Cincinnati game.”

“They played over 100 plays on defense. So I think they’re probably pretty comfortable with what they have because they played those guys, and they played pretty well against, obviously, a good offense. So I wouldn’t expect to see a lot of dramatic changes, like go to a whole big new scheme or anything. I don’t think that’s really their style. But we’ll see. I don’t know.”

3) The Patriots recently brought back offensive lineman Marcus Cannon, signing him to the practice squad.  Belichick said during his press conference that his return seems to be a case of just good timing, and they’re going to see how it works out.

“To put him on the practice squad and see how it goes,” said Belichick when asked about the decision to bring him back. “He was interested in us. We were interested in him. So it worked out.”

The former fifth-round pick by the Patriots in the 2011 Draft spent most of his career in New England, opting out of the 2020 season due to COVID before being traded to Houston in March of 2021.

He spent one season with the Texans and was released back in March of this year.  The fact the 34-year old is back in the fold is a good thing since, if it works out, it potentially adds much-needed depth to a tackle position that is definitely a little thin right now.

4) Belichick was asked on Wednesday about the play of offensive tackle Trent Brown, who was involved on the play where Jones was hit from the blindside and ended up losing the football, which the Dolphins recovered and scored on.

When asked about Brown’s buy-in and his effort, Belichick pointed out a play where the veteran was making plays downfield and he believes Brown has been putting in the work.

“I think you saw the play to (Rhamondre Stevenson) there where he’s 20 yards down field,” said Belichick.  “Look, I don’t think this guy is ever going to be a decathlon athlete, that’s not what he is. But he shares the play. But like everybody else, everybody has things they need to work on. That goes for all of us. So he’s working.”

5) One thing that was interesting was the fact Belichick was asked about Matt Patricia handling both the play calls and the offensive line, but one dynamic in that apparently involves assistant offensive line coach, Billy Yates.

Yates apparently spends the first half up in the press box, while spending the second half on the sidelines and balances Patricia’s duties for the remainder of the game.

“We feel like that’s the way to operate,” said Belichick.  “We’ve done that through the preseason and that’s worked out. The benefits of it have been kind of what we were looking for. So it’s always an option to change things, but I think that the way that it’s functioned has been good. So probably going to keep doing that.”

The reason why it’s only for one half is because, after two quarters, the coaching staff is apparently comfortable with what they’ve seen from overhead for him to move back to the sidelines.  Belichick confirmed that yesterday when asked if that was the case.

“I think there’s some, yeah. Somewhere in that ballpark,” said Belichick.  “Yeah.”

ODDS AND ENDS: Jones told reporters that despite Sunday’s loss, he feels good about where they are.  “It’s week one and we did a lot of good things out there, and we’re moving in the right direction in practice,” said Jones.  “A lot of the communication is improving and that’s what happens as the season goes along. You fix the things you want to work on and keep the things that you’re doing well.” … Belichick had praise for receiver Jakobi Meyers, who he says has come a long way as a player. “Very good and continues to get better,” said Belichick. “He’s a kid that got better through the course of his first year, from year one to year two, year two to year three and now year three to year four. Not just on the field but off the field preparation, leadership, adjustments, anticipation, all the above. Smart football player.” … Belichick also had praise for Steelers tight end Pat Freiermuth, who turned in a solid week one effort after catching 5 passes for a team-high 75-yards Sunday.  “Yeah, good player,” said Belichick.  “Athletic kid. Big target. Catches the ball well. Competitive blocker. He’s got good size, can cover some people on the end of the line of scrimmage. He’s done a good job for them.” … The Patriots placed Ty Montgomery on IR this week, although Belichick said if he can get healthy, it’s possible he could return. “If he’s healthy, we’ll bring him back,” said Belichick. “Sure. [If] he’s healthy, we bring him back. How that will all turn out, I don’t know. We’ll see. I’m not a doctor.”  … Jones also sounded hopeful that Montgomery will eventually make it back into the line-up.  “We have great players that will step in and fill his role, and he’s very versatile, but we just hope for a speedy recovery,” said Jones.  “I’m not sure what the exact extent of the injury is and stuff, but hope he’s doing good. I’ve talked to him a little bit, so I know he’s just trying to get it all fixed up.”

By: Steve Balestrieri
Goff has been lighting it up this year (11TDs, 3 INTs) and has plenty of options to pick from, even being short-handed.
6 hours ago