4 weeks ago at 6:34 am ET
Follow @SteveB7SFG
Posted Under: Patriots News 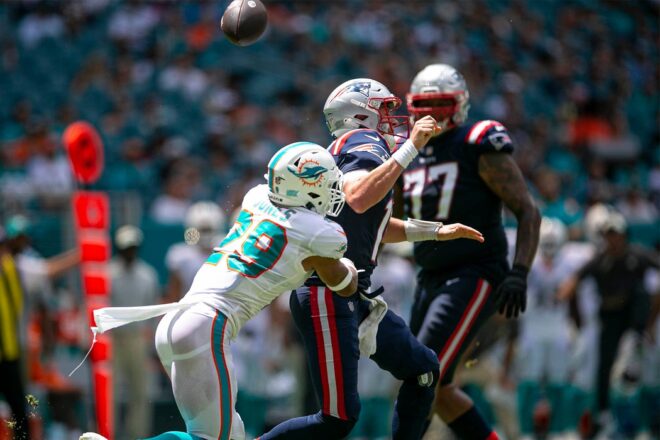 The Patriots dropped their opener in Miami 20-7, and as Bill Belichick said after the game, it came down to just a few big plays that the Dolphins made, and the Patriots didn’t that was the difference.

“Not enough good things to win. A couple of bad plays really hurt us,” Belichick said in his postgame presser. “Need to finish some drives better on both sides of the ball and make an impact. Just build on this and go back to work.” The loss at Hard Rock Stadium will lead to the typical overreaction Monday, but it came down to arguably three plays that were the difference.

—  After a very nice opening drive where the team moved the ball well, QB Mac Jones was intercepted on a tipped ball in the end zone, where the resultant Miami drive ended in a field goal. Jones went for a deep ball to DeVante Parker in the end zone on the interception.

Xavien Howard had blanket coverage on Parker; Jones’ pass was slightly underthrown, and he tipped it where Jevon Holland intercepted it about 3-4 yards deep in the end zone. Howard could have easily been called for a pass interference call there, but good corners often get that call, and he did. The 10-point turnaround there was a huge swing for the Dolphins.

—  Miami’s strip sack and fumble recovery gave them a 10-0 lead, resulting in yet another communication breakdown. Safety Brandon Jones moved late to the edge and then blitzed off the edge untouched on Jones’ blindside, stripping him of the ball where Melvin Ingram picked it up and returned it for a touchdown.

Whether it was Jones’ fault for not setting his protection or an issue between LT Trent Brown and LG James Ferentz is a question that we may never know, but there were numbers there to pick him up.

—  The touchdown at the end of the half was the back-breaker giving Miami a 17-0 lead. Facing a 4th and 7 at the Patriots 42-yard line with only 24 seconds left, Tua Tagovailoa hit Waddle on a shallow crosser. Waddle had beat Jalen Mills, and when Kyle Dugger tried to tackle Waddle, he missed and took out Ja’Whaun Bentley in the process. Although there was still a half to play, that dug too deep a hole for the Patriots to climb out of.

Other Observations of the Week 1 Opener Include:

— Kyle Dugger Was Impressive: The Patriots’ safety was notable (on a good note) for several plays for his sure, physical tackling in the open field. Even more impressive was the fact that Dugger had two of those plays against Miami speedster Tyreek Hill.

On an end around to Hill, Dugger was on an island and planted Hill with a solid tackle that was a no-doubter. On the next snap, Dugger shot into the backfield and made a tackle for a loss. Dugger had five tackles, including two for a loss on the day. It was a great start for him in Year 3.

— Offense Looks Simplistic: After the struggles of the offense all summer, it looked as if the coaching staff tried to simplify things even further by cutting out play-action passing, RPOs, and little motion. However, despite the plodding feel to it, Other than turnovers, the offense didn’t have a three-and-out, and they showed some good situational execution.

While Miami’s new head coach Mike McDaniel emptied the playbook schematically, the Patriots didn’t seem to use much in the way of different looks and plays as the personnel groupings seemed pretty limited.

The intermediate passing game was not there as the offense didn’t get anything going in the middle of the field. Using both DeVante Parker and the ever-reliable Jakobi Meyers in most of the packages, that left only Nelson Agholor as the only fleet WR on the field. And it was obvious that Miami wasn’t respecting the receivers with little ability to push the ball down the field other than low percentage deep shots on the outside.

Kendrick Bourne “could be” the difference maker here, but he remains in the doghouse. He only played two snaps; one of them was a 41-yard pass from Jones…hmm. The offensive line is still too inconsistent, allowing too many Dolphin defenders to blow through gaps and wreck running plays. Damien Harris had a nice game averaging 5.3 yards per rushing attempt, but overall, the team only gained 78 yards on the ground and 3.5 yards per rush. That isn’t good enough.

— Defense Has a Solid Outing: While the Dolphins’ additions to their offense were really hyped this offseason, they only put up 13 points against the Patriots defensively. We already mentioned Dugger, but Jonathan Jones also had a solid outing as well. After missing most of last season, Jones was tasked with covering the speedy Hill, who was targeted 12 times and had 8 catches for 94 yards.

The pass rush had two sacks (Matthew Judon, Deatrich Wise), seven QB hits, and the defense added 6 tackles for loss. That is a good showing. Miami’s revamped rushing attack only gained 65 yards on the ground, averaging 2.8 yards per carry.  Chase Edmonds and Raheem Mostert had a combined 18 carries for just 41 yards. They nearly had several turnovers against Tua, and this ia an area that they have to start turning into big plays for the defense.

— Mac Jones Suffers Back Injury: After the game, Jones was taken for X-Rays on his back after suffering the injury in the second half of the game. The results were negative, but he’ll be evaluated further on Monday in Foxboro.

Jones didn’t have a very good day; his 70 percent completion percentage, much like Tua’s 104.4 passer rating, was not telling the entire story. On Monday around 6:00 pm the All-22 film will be released, and we look forward to seeing that to see if that sheds any more light on the showing.

Was it all bad? Hardly, but the team needs to get its act together and quickly because they travel to Pittsburgh, face Baltimore in the home opener, and then travel to Green Bay.

Check out our positional report card on Tuesday.