3 weeks ago at 9:16 am ET
Follow @IanLogue
Posted Under: Patriots Transcripts 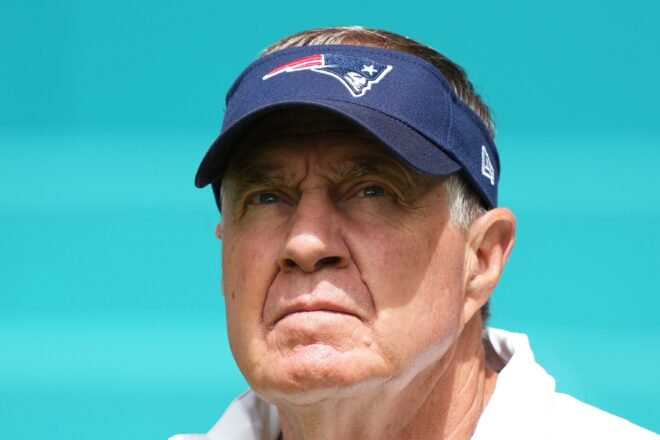 Here’s what Bill Belichick had to say during his weekly appearance on WEEI’s The Greg Hill Show on Monday:

On his message to the team after yesterday:

“Well, I think that there are things that we all need to do better, that’s what we’re going to have to start with.  Plenty of things in the game but they were overridden by some of the things that we didn’t do well.  So we’ll have to maintain the positive things and try to correct the things that we need to correct and play more consistently.  Obviously, a couple big plays really tilted the game and that was … the kind of plays we have to play better.”

On what some of the positives were:

“I think within every play there are things that are positives that we can work with. Again, it’s a matter of consistency and overall execution.”

On his thoughts on the playcalling and the overall communication:

“Well, as I said, I think there’s room for improvement everywhere. So start with me, and the coaching staff and all the units, offense, defense, special teams.  They’re all things we that we’ve got to work on and improve.   First regular season game. It’s clear that we have some things we need to work on.”

On his thoughts of getting down there early being a benefit in adjusting to the heat:

On how he makes sure guys keep focused and make sure they move on against a good team on the road in the Steelers:

On Kendrick Bourne and what he needs from him to give him playing time:

“Well, I thought KB did a great job of stepping in there when we needed him and made a big play for us.  He’s a good player and I’m sure he’ll have plenty of opportunities as all of our skill players will going forward.  So we’ll see how it all plays out.”

On why he didn’t see the field until the fourth quarter:

“It just kind of worked out that way.  It wasn’t anything that was specifically avoided.  It just didn’t work out.”

On Mac Jones’ back injury:

“Yeah, well, we’ll see.  Again, I’ve learned from many years of experience in doing this with so many different players and teams, that there’s a lot of different variation on where players are right after the game from where they are 12-18 hours after the game.  We’ll see where things are this morning and go from there.”

On having three safeties on the field and the problem it gives opponents:

“Well, Miami was in a lot of two receiver sets, so that certainly had something to do with it.  A lot of our defensive match-ups are based on who the offense has on the field.  So the more receivers they put on the field, most likely the more defensive backs we’re going to put on the field.  The fewer receivers that are on the field, then we’re going to have probably fewer defensive backs and certainly fewer corners with fewer receivers.  That’s all part of just the match-up game and that can certainly vary from week to week, depending on who those players are.  All tight ends, all backs, all receivers are not created equal.  There’s certainly a big variance in the skills of those players from team to team around the league.  But, generally speaking, that’s impacted by the players that the offense has on the field and that was very much of a mix of two and three receivers but there was quite a few of two receiver sets yesterday. There are some teams that will hardly ever play two receivers, it’s almost all eleven personnel, but that wasn’t the case yesterday.”

On if there were anything game script wise that he was happy with:

“Well, I mean, even the second drive of the game we … again, there were multiple drives where we had the ball across midfield.  We moved it, there wasn’t a lot of three-and-outs in the game, the strip sack, that was a bad drive but otherwise, for the most part, we were able to move the ball, we were able to get the ball to or across midfield but we weren’t able to materialize that into enough points.  So the drives that come up short, all came up short for one reason or another.  We had one touchdown drive but we’ve just got to do a better job of finishing the drives and coming out with points once we get into the opponent’s side of the 50 and we didn’t do a good job of that yesterday.”

On what he saw from Ty Montgomery yesterday:

“Ty’s given us good snaps all the way through since he’s been here.  In practice, in preseason games, and yesterday.  Glad to have him, look forward to continuing to work with him and I think he’ll have a good role for us offensively just like he had at the end of preseason.  He was able to get through the injury in the Raider game and be out there and help us yesterday.  So it was good to have him.”

On when he eventually retires if he’ll feel like Miami is his “Waterloo”:

“I’m not really worried about that right now.  Trying to focus on this game, get ready for Pittsburgh.”

On what he saw in Kyle Dugger coming out of college and made him believe he’d be a good player at this level:

“Well, Kyle had a lot of athletic ability, as we know.  Big, fast, physical player, and you saw his skills as a returner at that level too.  I think the thing that really helped Kyle was when he went to the Senior Bowl and was able to compete against other players from bigger schools that were maybe a little more known quantities.  Kyle’s a smart kid.  He’s really done a good job of acclimating himself to the NFL game and just a whole different level of competition from what he had in college but he adapted to that pretty quickly and has been a key contributor for us on defense and in the kicking game.   He’s a young guy with still a really bright future and is learning all the time by playing with a lot of experienced players back there.  Obviously, Devin [McCourty], AP [Adrian Phillips], and now [Jabril] Peppers, so there’s a lot of experience back there and I think that helps them all play together better.’

On the challenges the Steelers provide:

“Well, they’re a tough, fundamentally sound team and we’ll spend more time digging into them here after we finish up here with Miami and filling in the corrections and comments about the game from today.  But, yeah, it was a big win for them yesterday and this will be their home opener so it will be a good test for us.”