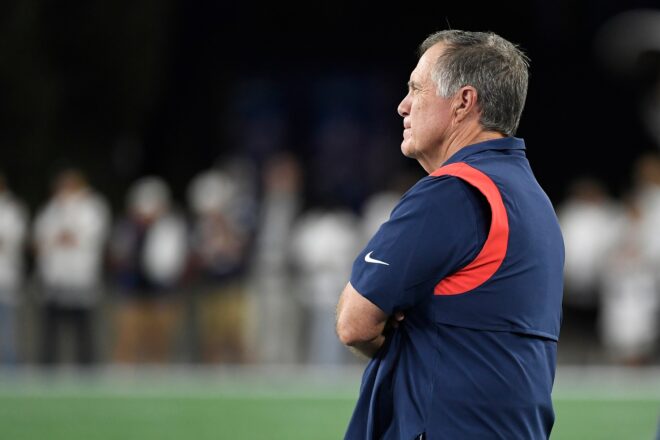 Here’s what New England Patriots head coach had to say during his weekly appearance on WEEI on Tuesday:

On heading down to Miami early

“Well, I think it will give us a good chance just to focus on getting ready for the opening game and to get acclimated to the conditions, whatever they end up being down there.”

On Devin McCourty saying when they were in Las Vegas, it was easier after the second and third days of being there with the weather and whether or not that played a factor in the decision to head down early.

“We made the decision to go down there a long time ago.  There’s a lot of travel plans that are involved there, so that wasn’t the kind of thing that we’d do normally, like a day or two ahead of time.  That’s something we’ve had in place for a while.”

On finding the identity of the football team and the importance of getting off to a good start:

On the fumble against the Dolphins in the opener last year and the importance of ball security this week:

“Well, there were a number of things that Miami did better than us in both games, but the second game there were turnovers in that game too.  We gave up the pick six at the beginning of the game and were down 14-0 early in the game.  So it’s not the way we want to start and the September game wasn’t a good way to finish when we were down on the, whatever it was, the 15 yard line and lost the ball.  Turnovers and ball security are certainly a huge point of emphasis anytime we play the Dolphins and that was evident in our two games last year.  So we’ve got to do a better job of with our ball security.  That’s one of the things we’ll be working on.”

On what Brian Flores brought to the team the last couple of years and what he expects from new head coach Mike McDaniel:

“Well, we’re just focused on this year’s Dolphins team.  Whatever they were or weren’t in the past, we’ll see how all that plays out or doesn’t play out.  But you know, coach McDaniel is going to go in there and put his stamp on the team, I think we’ve already seen that offensively.  I’m sure they’ll be some carryover on defense into the kicking game with the holdover coaches in those areas with Josh Boyer and Danny Crossman.  But there may be some changes too based on the influence of the head coaches, whether it’s coach Boyer or coach McDaniel, we’ll just have to see how it goes.

On looking at the identity of this Dolphins team after the moves they made this offseason and the problems their skill positions create:

“Well, we all know that [Tyreek] Hill’s a very explosive player, can score from anywhere on the field, has game-breaking speed that we see from time to time but it’s relatively rare. So we’ll have to certainly be aware of him, but as you said, they have other good players on that team.  Good receivers, good quarterback, tight end and a big emphasis on the running game with their offensive line.  So it’s not just one guy to stop. We’ll have to be competitive all the way across the board and play good team defense.”

“Well, that was certainly a great moment.  I think everybody is just happy to win like you usually are in overtime, especially on a play like that when you’re on your own 20-yard line, it doesn’t seem like the game’s about to climax.  Like in the Atlanta Super Bowl where we drove down, had the ball on the 1-yard line, the expectations and anticipation was a little bit different.  But it was a great play and, as usual, Troy Brown was involved in it like he was in so many plays and so many games in those years.  But always good to win, and always good to win in overtime and, like I said, especially when you’re on your own 20-yard line When you’re really kind of looking to get a first down and you end up making a play that wins the game.  It was very exciting.”

On what he’s seen from Isaiah Wynn and what he hopes to see from him in the next week:

“Well, I expect everybody that can be ready to go will be ready to go next week.  I know everybody’s working very hard to be 100% healthy and to be ready for the game, players, coaches, staff, everybody, so we’ll see how that develops, what kind of condition they’re in, in being able to play.  I know they’re working hard to be there but we’ll just have to take it day by day on everybody and see where they’re at.  But hopefully, they’ll all make it.  I think they have a shot. If they didn’t, like Tyquan [Thornton] didn’t, we put him on IR, but everybody else should have a shot.  So we’ll probably just see where they get to.”

On the defensive line and his thoughts on the importance of winning the battles up front and his expectations:

“Well, as you know, that’s always a very competitive position on the field.  That’s where the line of scrimmage is established or reestablished one way or the other.  The offensive and defensive line, that trench warfare has a lot to do with who controls the game and ultimately who wins it.  So those are critical positions and a critical part of the battle on the field.  We’ve had good competition there, and those players have all performed well.  We have good depth.  I know Miami has a very good running game and they have a lot of determination and commitment to the running game, so we’ll see how all that plays out.  Look forward to seeing our guys compete and develop, but this will be a good test for us.”

On how his time with the Giants helped him become a more well-rounded head coach and maybe how it better helped him understand offenses and how they operate:

“I’m not sure, that’s a good question.  I think you learn something every year.  I was very fortunate to spend my first four years in the league with three different teams, four different head coaches and spent two years on offense, two years on defense, and all four years involved in the kicking game.  So that was a good introduction for me to different phases of the game and how they become intermingled and situationally play off of each other and are integrated with each other through the course of a game and through preparations during the course of the season.  So those were all very valuable experiences the first four years in the league, and I think each year after that, at the Giants, which started off on special teams and ended up more on defense, I mean, they all build on one another.”

On if he took in any college football games last weekend or if there are any teams he has his eye on:

“No, I didn’t.  I missed those.  I heard there were a couple … some exciting games.  Most of my college football viewing comes in the spring when we start getting ready for the draft process and go back and watch those games, some of them over and over again with teams that have multiple draft-eligible players.  But no, I didn’t see much of what happened this weekend.”

On the fact he’s still coaching at a high level and if he gets time to reflect on where he is or if he’s just focused on the moment:

“Yeah, I think pretty much the latter, Wiggy.  I’m really focused on what I can do to help our team this year and get off to a good start and have a good season.  Whatever happened in the past, is all in the past, I don’t have any control over that.  Honestly, beyond this week, there’s not really much to talk about until after we finish with Miami and then move on to the next week.   Try to just stay in the moment and do the best I can to prepare myself, prepare our team and help our team win each and every week.  That’s kind of how I’ve always approached it.  I’m sure there will be time to reflect at some time, but for right now, it’s all about Miami.”

By: Steve Balestrieri
Goff has been lighting it up this year (11TDs, 3 INTs) and has plenty of options to pick from, even being short-handed.
2 hours ago

By: Mark Morse
Coach Dan Campbell has the Detroit Lions working hard and together as a team despite a rash of injuries.  Don’t dismiss their 1-3 record.
2 hours ago

By: Ian Logue
Some good news on Wednesday as rookie wide receiver Tyquan Thornton was out at practice, which hopefully marks the start of his return toward getting…
23 hours ago

By: Ian Logue
Patriots quarterback Mac Jones was back at practice again on Wednesday, which doesn't make much sense given the severity of the high ankle sprain he…
24 hours ago