1 month ago at 10:20 am ET
Follow @IanLogue
Posted Under: Patriots News 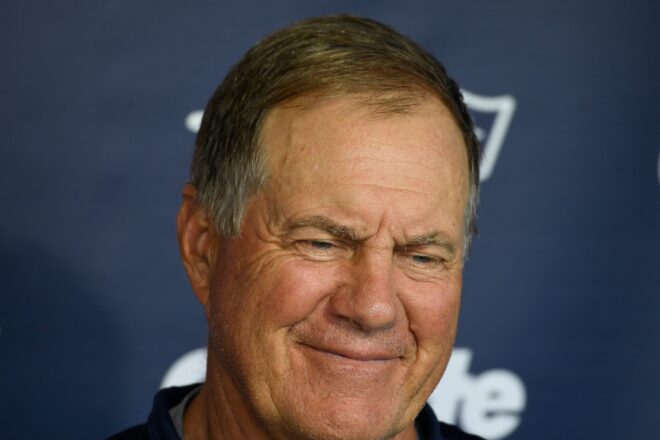 – Today is a big day for quite a few players as the NFL cut down deadline will see teams reduce their rosters from 80 down to 53 by 4pm ET.  A couple of players will potentially create an opportunity for others to stick around a little while longer, with Ty Montgomery and Tyquan Thornton being two that come to mind due to their injury situations.  Bill Belichick actually sounded hopeful on Monday that Montgomery’s injury may not be as bad as many thought after seeing him carted off.  “We’ll see how things go today, see what he’s able to do,” he said yesterday.  “But I think he’s doing all right.”  As for Thornton, he reportedly suffered a fractured collarbone in their match-up against the Panthers that, according to reports, required surgery.  But his early-season absence could open the door for another receiver to land a roster spot until he’s healthy.

– During practice, Montgomery was reportedly absent, as was Yodney Cadjuste and Kristian Wilkerson, with Jakobi Meyers limited during yesterday’s session.  Wilkerson now heads into his second week of missing time after suffering a vicious hit by the Panthers two weeks ago that is clearly still hampering him.

– Belichick was asked during his weekly appearance on WEEI to give his thoughts on the preseason and he downplayed the significance of how it affects where they’re at as a football team.  “I don’t think preseason games are a real big indicator of what the team is or isn’t, one way or the other,” said Belichick.  “That’s not about us, it’s about the NFL.  But you get a great chance to evaluate the players and I think that will be the focus this week on the 1,000 or so transactions that will take place across the league.”  With cuts coming later this afternoon, it’s probably safe to say we can expect New England to potentially make a couple of additions as they try and round out some areas of need, which will hopefully include adding some depth on the offensive line.

– One player who apparently won’t be heading to New England is former Patriots defensive player, Trey Flowers.  Flowers, who played for Matt Patricia in Detroit after leaving New England as a free agent following the 2018 season, reportedly agreed to terms with the Dolphins and he’ll instead be lining up opposite Belichick’s team when they open the season a little less than two weeks from now.

– Former Patriots running back Sony Michel was among the first names cut by the Dolphins on Monday, with the veteran now in need of finding a potential landing spot for this season.  Michel, who signed a one-year, $2.1 million contract with Miami back in May and played a critical role last season during the Los Angeles Rams Super Bowl run, was one of 13 players let go by the Dolphins yesterday ahead of today’s deadline.

– ESPN analyst Chris Berman apparently made Belichick’s day yesterday, with the head coach beaming and clapping his hands as Berman entered the media room on Tuesday.  Belichick greeted Berman with a, “Hey Boomer!” while following it up with saying, “We are graced!”  It’s not often you see Belichick smile and get excited during a media session, which definitely made it a little unique.  Berman started things off after Belichick offered him the first question, with Berman asking Belichick if he was still having fun.  “Love it, love it. Training camp,” said Belichick.  “Another week of camp here. Good opportunity for us to continue to get better. Obviously, no game this week but a lot of things for us to work on. Then we’ll start our preparations for Miami next week. We can get a head start on a few things there but there’s just some things that we need to cover this week, situationally, and clean up some things that through the course of the preseason we haven’t got to yet. But looking forward to it.”  Belichick said that when it comes to Berman, he said, “I think of “The Nattily-Clad” Bill Belichick, coined that phrase for me.”  Good stuff.

– When asked yesterday which group he was most comfortable with at this point, Belichick mentioned the safeties in what he felt is a “pretty deep” position.  “I would say the safety group is a pretty impressive group,” said Belichick.  “It’s good to see Jabrill [Peppers] out on the field. Devin [McCourty], AP [Adrian Phillips], [Kyle] Dugger, played a lot of football for us last year. You add Jabrill to that mix and Myles [Bryant] has also played safety for us out of the corner group. So between those five guys it’s a pretty deep position. But we’ve shown packages, and used packages last year with all three safeties on the field. Jabrill wasn’t here obviously. [Joshuah] Bledsoe has had a good camp as well. So I think that’s a pretty competitive position, not just for roster spots, but also for playing time and how that gets distributed. So I would say that’s probably my number one.”

– After seeing things play out this preseason, how things went down back in April seems to be working out well when it comes to New England’s draft class. Despite Thornton’s injury, this rookie class seems to be headed in the right direction and Matt Groh said they’re pleased with seeing this group develop.  “One thing that’s really nice is to see how close of a group they are as a rookie class,” said Groh on Monday. “To see them all sitting at lunch together, really growing together as a class. That just builds the team camaraderie in the locker room, so that’s been great to see.”

By: Steve Balestrieri
Goff has been lighting it up this year (11TDs, 3 INTs) and has plenty of options to pick from, even being short-handed.
14 mins ago

By: Mark Morse
Coach Dan Campbell has the Detroit Lions working hard and together as a team despite a rash of injuries.  Don’t dismiss their 1-3 record.
37 mins ago

By: Ian Logue
Some good news on Wednesday as rookie wide receiver Tyquan Thornton was out at practice, which hopefully marks the start of his return toward getting…
22 hours ago

By: Ian Logue
Patriots quarterback Mac Jones was back at practice again on Wednesday, which doesn't make much sense given the severity of the high ankle sprain he…
22 hours ago