1 month ago at 9:28 am ET
Follow @bob_george
Posted Under: Patriots News 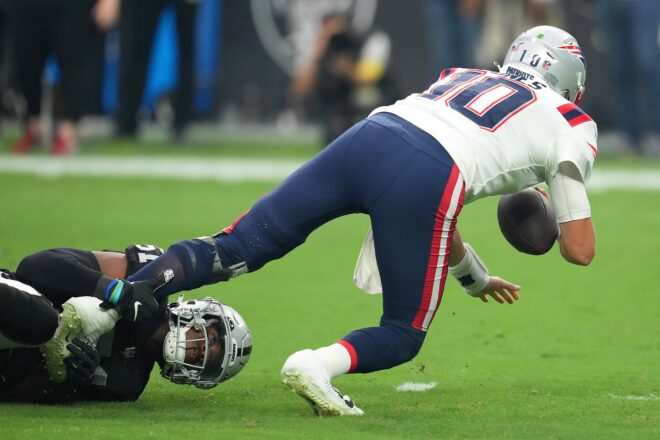 LAS VEGAS – You can put all sorts of spins on Friday night’s preseason finale, but none of them really point to “Gosh, can’t wait for the regular season to begin!”

Most of Patriot Nation probably also swears allegiance to the Red Sox, suffering through an injury-riddled bridge year in last place in the AL East. They can’t wait for the Sox to finish their lost season, so that they can finally pay all their attention to the Patriots. Everyone from Madawaska, Maine to Westerly, Rhode Island is primed for a great season as Mac Jones heads into his first NFL season where he is no longer classified as a rookie.

Memo to Red Sox Nation: Stick with the Sox for a little while longer. It may be better than watching the Patriots get off to a 1-3, or even (gulp) an 0-4 start.

This should not be taken as a “prediction”. Nobody knows how to manage the preseason better than Bill Belichick. Even though the Patriots have a brutal first four games on their schedule (road games at Miami, Pittsburgh and Green Bay, and a home date with Baltimore), the Patriots could go 2-2 here and be in good shape moving forward.

If you think that a 2-2 start is a good and reasoned guess, don’t use Friday night’s 23-6 loss to the Las Vegas Raiders at Allegiant Stadium as your final judgment basis to predict how good or bad the Patriots will start in 2022, and how things will turn out if the season does start abysmally.

Jones and the varsity offense played the first four offensive series, and the varsity defense started the first four defensive series as well. Usually, when the starters get that kind of on-field playing time in the final preseason game, that means that Belichick is displeased with what he sees and wants them out there until they get it right. This happened in a 2004 blowout loss at Cincinnati in the preseason, as players in the Super Bowl DVD mentioned that they played in that game longer than they imagined (the entire first half and one series into the third quarter).

In Friday night’s first offensive possession for the Patriots, Jones and the offense went three and out as Rhamondre Stevenson was cut down for a four-yard loss on second and two, then Jones was sacked for a 13-yard loss to end the drive. The second drive ended on an interception that is squarely on Jones. Jones drove the Patriots to the Raider 47, then tried to hit Kendrick Bourne on a deep right seam route. Jones did not see linebacker Luke Masterson lurking, and he stepped into the passing lane and picked off the pass, returning it 30 yards to the Patriot 32. Las Vegas scored a touchdown on a four-yard run by Zamir White to make it 10-0 Raiders.

Jones did get the Patriots into the end zone on the fourth offensive possession. On third down and 3 at the Raider 7-yard line, Jones hit Devante Parker in the left corner of the end zone. Except that Parker was flagged for offensive pass interference, a questionable call that even the Raider broadcasters thought was a bad call. Nick Folk kicked a short field goal to make it 10-3 Raiders, and that was the night for Jones and the offense.

This negated touchdown would not be the last time that would happen in the game. In the third quarter, a 3-yard touchdown run by Pierre Strong was called back thanks to an obvious holding penalty on tight end Jalen Wydermyer. Folk would soon come in and kick another short field goal.

On both sides of the ball, Josh McDaniels played his second and third units and kept his starters on the bench (one shudders to think what Derek Carr and Davante Adams would have done had they played). So with the score 13-3 Raiders when the Patriot regulars finally came out, and the Patriots sputtered like they did against the bench warmers for what is perhaps the worst team in an incredibly strong AFC West division (Raider fans will scream that Denver is actually the worst, and they may be right), this cannot sit well with Patriot Nation.

How to explain this?

It was hot this week. Much of the western USA would love all the flood waters of Texas and Kentucky shipped by pipeline out here. Las Vegas does not have the stifling humidity of Foxborough, or other NFL venues such as Nashville, Atlanta or Charlotte. The Patriots and Raiders held joint practices this week in 107-degree weather. With near zero humidity, it is an interesting feel if you are used to humidity, but it is still hot and you are susceptible to heat exhaustion and heat stroke. The Patriots perhaps were tired in this game. The team did look good in the previous two preseason games against the Giants and Carolina. Friday night may have simply been a case of a team that was too taxed, though the Patriots did get Thursday off.

Belichick and McDaniels know each other inside out. Obviously, McDaniels is not the new Eric Mangini, as the two former colleagues chatted happily during pregame and ran joint practices all week. Certainly, McDaniels had his Raiders prepared, extrapolated to a meaningless preseason finale, but it looked like the Raider second unit could probably start for Detroit or Jacksonville or the Jets. McDaniels probably has a better handle on Jones than anyone else in the league, but over the years, that may not hold up very long.

The regular season opens up Sunday, September 11 for the Patriots. Why would Belichick try and unveil anything exotic in a game like this? The only problem here is that the first units played four series, not one as expected. Why play all your starters for four series in a preseason finale? Not wanting to give Miami anything to look at in film study is a no-brainer. Playing vanilla offense and defense is the way to go. But there was a cost if Belichick really wanted to keep his starters out there until they played better: Ty Montgomery had to leave the game in the first half after suffering a reported ankle injury. You have to get through the preseason with no injuries to your starters. So fine if you want to save your A-game for Miami, but the starters stayed in way too long.

Thankfully for the Patriots, Miami will be hideously humid and not desert dry like Las Vegas, so that should bode well for the Patriots (honk if the facetiousness was duly noted on your part). Foxborough and most of New England was unusually hot and humid for much of July and August, so that will help the Patriots as they open the season in a city where they have lost four of their last five games. They face a Dolphin team in turmoil, with an owner who was busted for tampering, a former head coach who is suing them, and a quarterback who is maligned in Miami but yet is undefeated against the Patriots (why would Miami lust for Tom Brady when Tua Tagovailoa has never lost to the Patriots?).

Patriot Nation can now rest up, start up your fantasy leagues, watch the Red Sox and try and figure out what Chaim Bloom’s master plan is (is this guy more mysterious than Belichick?), and get ready for when things get real. Buffalo is favored to win the division and a lot more, but all hope springs eternal on opening day. The nation will pause to remember arguably the worst day in USA history, then it’s finally time when toe meets ball.

And for Patriot Nation, remember that despite not knowing who will be calling the plays, knowing how humid Miami will be, and wondering if Julian Edelman and James White will come out of retirement, you still have the head coaching GOAT. And Belichick is worth more than a royal flush any day and any time.

I know Patriot fans did not like it but that was a good PI call. The way offensive PI should be called. Three things happened – the offensive player put two hands on the defender and pushed, however slight. The push dislodged the defender creating separation for the offense. And the push itself created momentum and separation by and for the WR. Disadvantage for the D. Advantage for the O. Exact basis for calling a penalty. Will the NFL continue making this call in the regular season? Do not know. But they should. The rules of the game already are… Read more »