2 months ago at 9:54 am ET
Follow @IanLogue
Posted Under: Patriots News 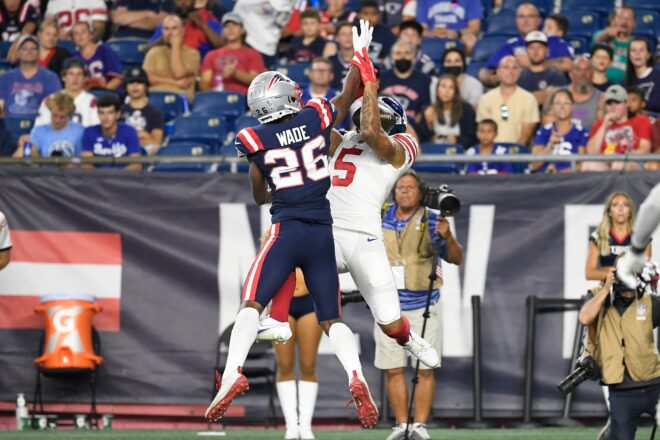 Some Patriots news on this Monday:

– With the team’s first exhibition game now in the books, seeing the group of linebackers the New England Patriots will potentially be starting the season with was certainly more encouraging than expected.  With both Matt Judan and Ja’Whaun Bentley sitting this one out, Mack Wilson, who was acquired in a trade with Cleveland for Chase Winovich, played surprisingly well against the Giants.  He was extremely active after finishing the night with five tackles (4 solo, 1 assisted) along with a quarterback hit and looked the part of a player who could be ready for a larger role with his new football team.

– Reakwon McMillan was another player who also impressed during his time on the field (2 tackles, 1 QB hit), with Anfernee Jennings (2 tackles, 1 QB hit) also flying around and disrupting things.  Josh Uche (2 tackles and a sack) rounded things out and they had him moving around quite a bit, which shows his evolution of what we’ve heard based on his efforts in camp.  His overall body of work showed that he’s more than just a pass-rushing player, and it looks like he’ll be a key part of New England’s defense this season.

– Also looking solid was Cam McGrone, who saw action in the first half and finished the night playing in nearly 70% of the defensive snaps overall, finishing with six tackles (5 solo, 1 assisted).  He made some nice plays and for a group that had so many questions, it was a nice glimpse at a unit that definitely showed some terrific speed and quickness.  After how last season finished, Thursday night’s performance should have fans feeling a little more optimistic heading into the season.

– The battle for the final wide receiver position is going to be interesting.  With Mac Jones being kept on the sideline, Bill Belichick also sat the other starters as Kendrick Bourne, Nelson Agholor, DeVante Parker, and Jakobi Meyers each got to watch their teammates handle things.  Other than rookie Tyquan Thornton, Belichick gave the playing time to guys who are still fighting for a spot in what is an impressive depth chart.  Kristian Wilkerson seemingly won the night over Tre Nixon, who had a crucial third down drop that would have likely tipped the scale the other way had he come up with that one.  Wilkerson finished the contest with 8 receptions on 12 targets for 99-yards and made several impressive grabs, while Nixon caught 4 of his 8 targets for 81-yards.

– Lil’ Jordan Humphrey also played well after hauling in six receptions for 62-yards including a touchdown.   It was just surprising to see how fairly talented each of these players are and how difficult it’s going to be when it comes time for the club to pare down its roster.  All three look like they belong, but it’s just going to be a matter of who is left standing when it’s over.

– One other thing that stood out is the fact that this is probably the first year in recent memory where we saw receivers fight for the football compared to past seasons.  Both Brian Hoyer and Bailey Zappe threw up a few contested passes, with several of those receptions being made despite tight coverage.  That seemed to be an area where they have been lacking in past seasons and it’s good to see that happening with guys who may potentially not even be on the roster in the coming months.  Hopefully, it’s an overall trend that continues.

– Sixth-round pick Sam Roberts stood out as he remains one of the more intriguing players to watch in the coming weeks.  Roberts had a notable play where he blew through the line and helped set up a sack, with the high-energy player out of Northwest Missouri State showing the same tenacity that helped him get drafted.  Undrafted free agent LaBryan Ray also continued what has been a solid preseason and looks poised to earn a role. The Patriots have had luck in the past with late-round and undrafted guys being impact players and it’s going to be interesting to see what this pair does over these next couple of games.

– Fellow rookie Jack Jones also had a strong debut.  The defensive back out of Arizona State only recorded one pass break-up on the night but he looked strong in coverage and made a couple of breaks on the football where it looked like he had a shot at coming up with a turnover.  Jones displayed some terrific instincts, which has been something he’s done throughout training camp and it wouldn’t be a surprise if we see him come up with an interception at some point this preseason.

– The secondary as a whole was also promising.  With several starters held out, Terrance Mitchell and Shaun Wade each had some good moments, while Malcolm Butler still appears like he’s shaking off a little rust.  Butler had a missed tackle Thursday night that was a little frustrating and he didn’t quite look as strong in coverage as the rest of the group.  Joejuan Williams was probably the most disappointing, with the defensive back struggling at times and he made a key mistake by committing a face mask penalty on a 3rd-and-11 in the third quarter that led to a Giants touchdown.  But overall, the group that did play performed fairly well.

The Patriots will spend the next few days getting ready for their next opponent, with the Carolina Panthers set to visit Foxboro for both joint practices, as well as Thursday night’s preseason game at Gillette Stadium.

By: Steve Balestrieri
Jerod Mayo and Steve Belichick, after playing tight man coverage all day, laid off the ball and allowed big cushions, which Rodgers exploited
20 hours ago