10 months ago at 10:22 am ET
Follow @IanLogue
Posted Under: Patriots News 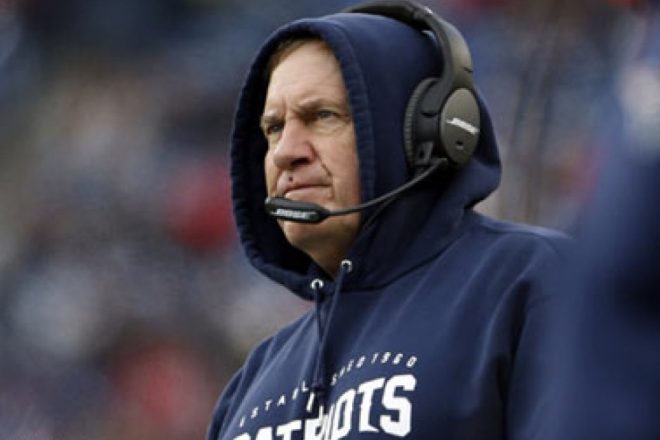 1) Another teammate of New England Patriots quarterback Mac Jones is set to be meeting with the club today, with Alabama wide receiver Slade Bolden reportedly up next as the next prospect the club will be taking a look at.

The Patriots already met with Bolden at the Combine, with Bolden telling reporters that he’d love to be reunited with his old college roommate.  The standout from Alabama also said at the time he watched a lot of film on Julian Edelman and tried to emulate him, as well as working with Bill O’Brien to learn some of the concepts around some of the things that made Edelman so successful.

One thing that was interesting was that Bill Belichick was on hand for Alabama’s Pro Day but left prior to Bolden’s workout with running back Brian Robinson as the two hit the field for passing drills.  It’s possible Belichick had already seen enough during their previous visit and didn’t want to tip his hand about any interest there.

Either way, the fact Bolden is in for a visit certainly should have people wondering if it’s safe to say they’re indeed going to take one of Alabama’s receivers and it just may simply come down to who is available and when.

Perry is a player who initially started his career at Boston College and later transferred to Brown, where he led the nation in total offense (367.8 yards per game), while also setting an Ivy League record for total offense (3,678-yards).  He also led the team in rushing with 730-yards while finishing with 2,948 yards passing.

Looking at the film, he’s extremely athletic and throws the football fairly well when he’s forced out of the pocket.  He also seems like he’s fairly decisive, and also appears to do a good job of keeping his eyes downfield.

It’s not the first time the Patriots have looked at quarterbacks this offseason, nor should it be all that surprising.  The team needs to make a decision for the future at the back-up quarterback position, as both Brian Hoyer and Jarrett Stidham are certainly not a long-term solution.  Jones took some brutal hits in 2021 during his rookie season and was able to bounce back up and keep going, but the team needs someone behind him and it appears they’re continuing to do some due diligence there.

Here’s a look at some highlights from Perry:

As for Vrabel, he’s the son of former Patriots linebacker Mike Vrabel, who is obviously the head coach of the Titans down in Tennessee.  Vrabel played both left and right tackle at BC and was among the reasons for the offense’s success running the football, as well as being a tough presence up front.

He’s a big guy, coming in at 6’5″, 316-pounds but he’s also pretty athletic after running a 7.47 3-cone drill and a 4.61 short shuttle.  He’s considered to be a strong player who still needs some work, but to see him land in New England, especially given their needs on the offensive line, would be fun to see.

If he possesses his dad’s work ethic and can avoid some of the injury issues he dealt with in college, it feels like he might be a good fit.

3) It looks like Washington Commanders owner Daniel Snyder may be too far gone, as the latest revelations in the ongoing investigation could be the death knell that could see him potentially lose the team.

According to reports, the franchise quietly withheld over $5 million in deposits placed by season ticket holders, as well as withholding ticket revenue that was supposed to be distributed to other NFL franchises.

Snyder was reportedly officially notified by the Federal Trade Commission following a 20-page letter that was sent by the Congress Oversight Reform Committee, which notified the FTC of their findings.

One portion of the letter said that the team was keeping two sets of books, with the doctored one being the one sent back to the league.

“Information and documents obtained by the Committee further suggest that the Commanders concealed revenues that were owed to the NFL as part of a revenue-sharing agreement that redistributes revenues to 32 teams in the League and helps set salaries for the League’s football players,” said one portion of the letter.  “According to the former executive, the team maintained “two sets of books”—one that was shared with the NFL but underreported certain ticket revenue, and another internal set of books that included the complete and accurate revenue and was “shown to Mr. Snyder.”

“Another former team employee informed the Committee that “it was known and/or rumored in the office that there was ‘moving around’ of money regarding tickets,” and stated that she told an outside investigator hired by the Washington Commanders about this issue in 2020.”

“Documents indicate that the revenue gained by the team through these practices was known internally as “juice.””

These revelations apparently came from former employee Jason Friedman, who was with Washington for 24-years.  Needless to say, he’s not some disgruntled short-term ex-employee.  He’s someone who was with the club for two decades, so his allegations certainly hold enough weight where this isn’t likely to go away.

While Snyder has survived past accusations, given everything we’ve seen so far, this one certainly appears like it might be the one that pushes things over the edge.

4) Mel Kiper Jr. posted his latest Mock Draft on ESPN+ and he seems to feel it will be defense that Belichick targets during the first two rounds later this month.

Kiper has them targeting inside linebacker Devin Lloyd from the University of Utah with the 21st overall selection, with Kiper believing that he’s just a guy who fits what Belichick is looking for.

The ESPN analyst wrote that he pondered about New England potentially targeting a cornerback or a receiver at this spot, but he liked what Lloyd brings to the table and just felt like he’d be a great fit.

“I thought about a wide receiver and cornerback here, but Lloyd just feels like a Bill Belichick-type player,” wrote Kiper. “He’s always around the ball, is a great blitzer from the middle of the defense and makes plays. The Patriots allowed 4.5 yards per carry last season, which ranked 25th in the league. This fills a void with an impact player.”

In round two, Kiper predicted the Patriots targeting the defensive line, with the University of Houston’s Logan Hall being the guy he felt also made sense.  Kiper believes that Hall’s versatility makes him a great fit, and that’s why he went in that direction.

“This is another Patriots-type pick, because Hall is a bit of a tweener. At 6-foot-6 and 283 pounds, he might be best suited for a defensive end spot in a 3-4 scheme, or he could kick inside and play as a 3-technique tackle. Bill Belichick & Co. will be able to use him in different ways. Hall has put on more than 50 pounds since high school, so he’s still growing into his frame.”

Both are interesting players, with Lloyd’s name coming up on quite a few mock drafts so far this offseason.  He’s got a body and the athleticism similar to Jamie Collins, and he’s an incredibly smart player.

Here’s a look at a pretty good breakdown of him:

5) Who is the greatest coach of all time?  Apparently, among sports fans, Belichick appears to be getting a little more recognition than you would think.

Obviously, here in New England, the answer is obvious.  But according to Morning Consultant, the view nationwide was fairly surprising.

In a survey they conducted last week, Belichick finished tied with Green Bay’s Vince Lombardi at the top of the rankings for best coaches in sports of all time, which also included names like Phil Jackson, Mike Krzyzewski, Bobby night, and others.

Here’s a look at the results: 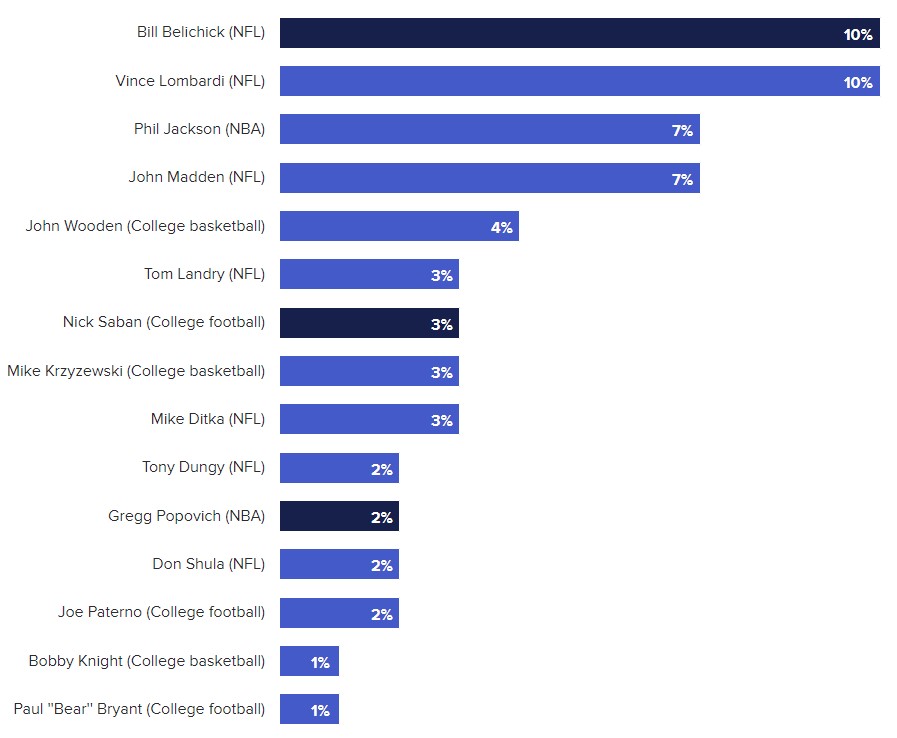 The survey also pointed out that in an open-ended situation where fans were able to simply give their thoughts with the name of who they felt was the best-ever, of the top 15 sports coaches ranked, 10 were connected to football, whether it was pro or college, while five were tied to basketball.  They mentioned that this obviously shows how dominant the two sports are compared to MLB or NHL in the news cycles since none of the names made it into that top tier.

They did mention that both Joe Torre (MLB) and Scotty Bowman (NHL) did make it into the top 30, with Torre and Bowman coming in at #18 and #29 respectively.

Paul Brown and Red Auerbach belong very high on the list as do at least a few, if not more, baseball managers. Tony Dungy and Mike Ditka – seriously???

I agree. The problem is that obviously football seems to dominate and much of the current generation doesn’t seem to appreciate those guys, especially on a national level (Auerbach). It’s pretty crazy.