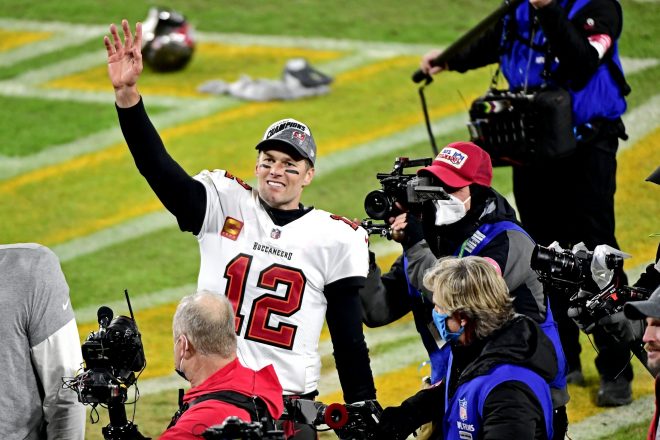 Out in Buffalo, former Patriots quarterback Tom Brady made Buffalo Bills fans pretty miserable after dominating them for nearly his entire tenure with the New England.

Needless to say, he’s not exactly well-liked and on Wednesday, local Buffalo sports radio had some questionable things to say about the former Patriots signal-caller while talking about the story that potentially involved a move to Miami coming off his retirement this offseason.

The theory is, and the story has been gaining steam, that Brady was going to retire and then take on an ownership stake in the Dolphins.  From there, the thought was that Miami would bring in Sean Payton to become the head coach, with Brady later unretiring and then playing quarterback for the Dolphins.

According to reports, the Brian Flores lawsuit effectively ended that option, at least for 2022.  Obviously, Brady has since unretired and gone back to the Buccaneers.

As a result, that topic of discussion came up this morninig on WGR 550 SportsRadio in Buffalo, setting off some disturbing speculation by talk show host Jeremy White, who he claims started from a fan who Tweeted to him.

White said the Tweet he received got him thinking about whether or not Brady’s entire career was truly legitimate.  In fact, the fan suggested that it could be possible something will eventually come out that will reveal what many out there seem to believe could be true about the future Hall of Famer to tarnish his legacy.

White ran with it, saying he wouldn’t be surprised at all while making some crazy accusations.

“I just want to say something about Tom Brady as a competitor,” said White, who was on air with fellow host Sal Capaccio.  “Because somebody Tweeted this to me and I thought, ‘You know what?  That is an interesting question to ask about him.'”

“First off, I Tweeted and pointed out, “Tom Brady retired, he got his week-long farewell tour.  ‘GOAT’, ‘you’re the GOAT’, ‘we love you GOAT’ – a week of this.  He got a 10-part documentary on him.  He gets endless praise.  He walks away from the game – he says it’s because of his family – which is an excuse to lie to everyone.  To publicly lie about your intentions to create a loophole to go play for another team.  All of that to play for another team.  Lying about a retirement.”

“Someone wrote to me and said, ‘Are we really going to be surprised if it all comes out that he’s been pulling a Lance Armstrong all along and doing God knows what to keep playing so long?’ [He’s got] unlimited resources and being smart and hard work is all that it is, but nothing is off the table with this guy.”

“And I started thinking about that and thinking, ‘You know?  There’s an awful lot of under the radar … yeah, it’s kind of fishy that this happened.  And it’s really kind of fishy that this happened.  Oh, it’s kind of weird that he was always underpaid with the Patriots.  How could that be?  Well, the Patriots had investments in his companies.  Huh…I’m sure that’s fine, right?”

“The story about Spygate.  The first story about Spygate, there’s a book that’s been written about Spygate that, from a guy that used to work for the Patriots, who laid into all of the things that they did and how, in the helmets, where you could talk to the quarterback, they would keep that on the whole time.  And he got every single thing he ever needed to know told to him through his helmet early in his career.”

“And what happened to the Spygate proof?  Well, that just all got destroyed by the NFL.  Then there’s the Deflategate scenario, right?  Oh, Tom, we’re going to need your cell phone.  ‘Oh, I destroy it every 6 months.'”

“Like, who are we kidding with this dude?  I mean he’ll do, Sal, I think it’s fair to not even make an accusation about what he would do, but just to say, ‘I think that dude would do anything to win and he has pushed and broken rules before.'”

Those are hefty accusations to make.

The communication thing is interesting, as there haven’t been any reports that have come out about that, which definitely would have happened.  He may want to check that again, because at no point has anyone reported that the line stayed live the entire time early in his career.  Or at any point during his entire career in the NFL for that matter.

In fact, all quarterbacks on a given team typically have the same communication in their helmets and they listen in on the play calls throughout each game.  Plenty of guys have come and gone through the system and if anything was being done that wasn’t on the level in the last two decades, one would definitely believe something would have been said.

Also, Brady admitted to Peter King following their Super Bowl win several years ago that he and Josh McDaniels took advantage of every moment later in his career, communicating all the way down to the final 15-second mark before the signal goes dead, which oftentimes allowed McDaniels to let him know something he potentially didn’t notice.

The way they’ve been efficient in their time was documented really well in a previous article in the Boston Globe back in 2017 with a great piece from Ben Volin, who broke down exactly what happened moment-to-moment during that process.

Part of that included help from former Director of Player Personnel Nick Caserio, who wore a variety of hats including working up in the booth on game day and communicating ball location, which hash they’re on, down and distance, as well as personnel adjustments by the opponent.

But anything shady?  No.  Just incredibly thorough.

As for anything physical or shady that might involve some sort of substance use on Brady’s part, that’s also unlikely.  He hasn’t said it, but it’s probably safe to say the NFL has drug tested him more times than he’d prefer to admit.  After all, we remember last season after a big game from Kyle Van Noy that the league immediately requested a sample from the veteran linebacker.

At 44 years old, it’s likely the same happened at various points throughout the last two years with Brady after some big passing performances.

Needless to say, White’s statements are irritating, but not surprising.  Quite a few people are likely in agreement with him regarding the retirement and the additional allegations that are out there which potentially involved a possible play for Brady to go to Miami.  But that we’ll one day find out that Brady’s entire career was due to cheating?

That just sounds like typical sour grapes coming from a region that enjoys throwing adult toys on the field every year.

For now, the Bills haven’t had a chance to face Brady in the game that matters most and after coming up short again, this is apparently what fans and local radio will do to pass the time and talk about until that day eventually comes.

You can listen to the full segment here beginning at around the 0:27:29 mark.

(H/T to our member upstater1 for pointing the segment out on our forum.)

(UPDATED at 11:52pm ET: After review, the mention of Brady’s helmet by White in the above entry apparently stemmed from a book written by author Bryan O’Leary, who is not an ex-Patriots employee [there is a Brian O’Leary who is listed on LinkedIn as working for the organization as a “Replay Coordinator” since 2016, but he’s not the same person].  Bryan O’Leary alleges in his self-published book “Spygate: The Untold Story”, a rumor that former Patriots QB Doug Flutie allegedly once picked up a helmet during a game while he was a back-up in New England and heard a broadcast coming through it beyond the cutoff.  That rumor was not conveyed to O’Leary directly from Flutie and, by all accounts, this rumor was also never confirmed by Flutie.)

(UPDATED at 11:53pm ET: One additional bit of information from Mike Reiss following a second investigation in 2008 which touched on the communication accusations.  Roger Goodell confirmed after the NFL investigation there was no wrongdoing in regards to the club’s communications practices:  From Boston.com: “Goodell also noted that Walsh confirmed he was aware of no other violations of league policy by the Patriots – “no bugging of locker rooms, there was no manipulation of communication systems, there was no crowd noise violations that he was aware of, no miking of players to pick up opposing signals or audibles.”)

But of course. Tom Brady’s career may not be legitimate. A fantasy story started by none other than a Buffalo beat writer. You probably should find another profession Ian.

Again, as I said, it’s not surprising, but it’s a little irritating – especially given some of the other accusations and comments. Otherwise, no, this isn’t my profession and I don’t plan on quitting my day job. However, thanks for reading and I’ll take your advice under advisement 😉

This is what happens after years of heartbreak following a team like the Bills.

Butthurt Jills fans. Masters of nothing!

His entire career is tainted by cheating scandals. And the fact that you actually believe Goodell, after he destroyed all evidence is hilarious. He destroyed the evidence bc what they did, if it got out, would’ve damaged football beyond repair for years to come. It’s so funny that butt-hurt Patriot fans are even writing these articles. Boston sport fans are the literal worst most obnoxious & disloyal fanbase of all professional sports. There have been books written about how terrible & disloyal the Boston fanbase is LOL but sure, now that there is a changing of the guard & the… Read more »

I Dontbknow how a Pats fan can not be Torn With Tom Brady Forst off of you dont think that Tom Brady gave new meaning to the saying “Do Whatever it takes to win”.” Qnd you can’t see that asuch as the na.e Tom Nrady os associated with the word champion, Tom Brady is also associated with the word CHEATER! PEOLLE TGAT DONT BELIEVE THAT ACTIALLY BELIEVE THAT EVERYONE IN BUFFALI BRINGS Q DDO TO EVERY BILKS GAME AS PART OF THEIR FOOTBALL TRADITION ,YEAH LIKE ALL PATS DANS ARE WELL BEHAVED AND TGERE ARE MEVER A FEW IDIOTS EOTHER… Read more »

Lance Armstrong was totally different. First off the sport of cycling was always rampant with ped use. It wasn’t Armstrong who could do it cuz of his money and status. This was highly organized by the team itself and was ingeniously covered up and wouldn’t have come out if not for the teammate who also used by snitched on all his former teammates and friends. While all teams were doing it. I believe it was also a different type of doping than what more traditional athlete’s tend to use. For a sport that demands stamina and cardio at an almost… Read more »