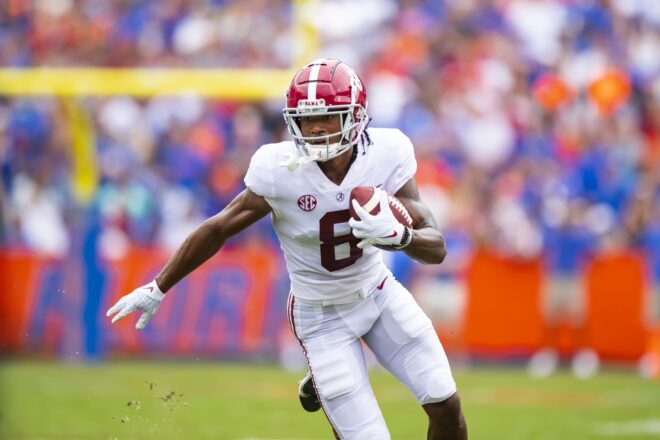 As the Patriots still mulling their options heading into the NFL Draft, it looks like they’re again taking some time to do some due diligence on another Alabama receiver.

According to reports, wideout John Metchie III made a visit Tuesday, with the New England Patriots opting to use one of its Top 30 visits on a player who is a previous teammate of Mac Jones and someone that has experience and chemistry catching passes from his former QB.

The two connected on 55 passes for 916-yards and six touchdowns as the Tide went undefeated to a National Championship, so it’s clear that the likelihood of them getting on the same page shouldn’t be much of an issue.

At the NFL Combine, Metchie pointed out that there’s been a trend for teams to target former teammates of their starting quarterbacks, with the 2021 season being a key example when you look at Cincinnati.  They drafted Joe Burrows’ former teammate Ja’Marr Chase, who went on to have an unbelievable season after finishing with 81 receptions for 1,455-yards along with 13 touchdowns.

Another example is what happened down in Miami.  The Dolphins selected former teammate Jaylen Waddle at #6 overall last season, reuniting him with former Alabama quarterback, Tua Tagovaiola.  Waddle went on to have a strong rookie campaign after he hauled in 104 receptions for 1,015-yards and 6 touchdowns.

That’s not to say it’s a guarantee that Jones and Metchie would experience the same success, but given the Patriots’ history when it comes to that position, it would at least potentially reduce the risk of ending up with another player who just can’t get on the same page.

Metchie said back at the Combine that, “I think Mac-10 and I would be special together, for sure.”  Coming off of an ACL tear, the belief is that he’ll be a Day 2 selection and it will be interesting to see if Belichick decides to take a shot at bringing him in.

Our own Steve Balestrieri talked about Metchie on a recent podcast (see below).

READ NEXT:
With Russell Wilson on Board, Chiefs Domination of Broncos May Soon Be Over
Posted Under: 2022 Patriots Draft
Tags: John Metchie III University of Alabama