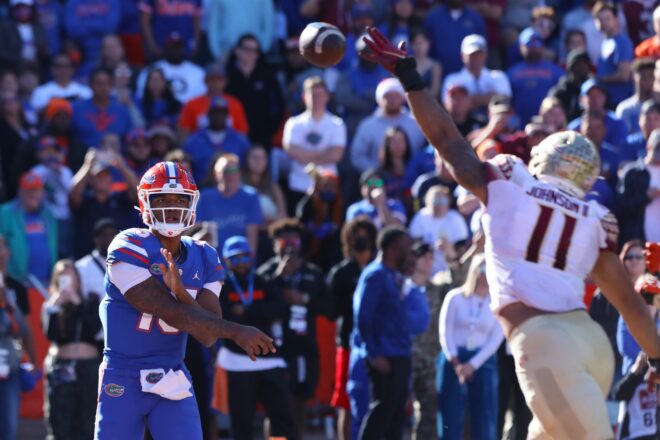 The Patriots can use some help at the edge in 2022. Matthew Judon was outstanding but was overworked and faded down the stretch. Much was expected from Josh Uche after an outstanding training camp but he disappeared.

Ronnie Perkins was drafted last year, but had a red-shirt type of year and didn’t see the field at all. Chase Winovich had a decent start to his career with back-to-back seasons with 5.5 sacks but ended up in Bill Belichick’s doghouse and saw the field little in 2021 and was traded to Cleveland for LB Mack Wilson.

The team will probably still look to add a veteran in free agency, one particular former Patriot, Trey Flowers has been a name that has been tossed about, and he’s still just 28-years old. But they will probably also look for a draft prospect as well. And the next player in our draft profile series would help a great deal.

Jermaine Johnson, from Florida State, is the first player in ACC history to win the Defensive Player of the Year in his first season in the ACC after transferring from Georgia. Johnson notched 18 tackles for loss along with 12 sacks among 70 total tackles with two pass breakups and two forced fumbles.

Johnson measures in at 6’5, 254 pounds with 34-inch arms. He left Georgia to get more playing time and the biggest question was how he would play in a featured role. He answered all of those questions and had a fantastic week at the Senior Bowl.

– Hand usage needs to improve (Joe Kim could help with that)

– Needs to work on his finesse pass-rushing moves

– Bend on the edge and flexibility is average

Johnson will definitely begin his career as a designated pass rusher.

Yes, he could easily become a plus starter for years to come

Kyle Van Noy, who was released.

Johnson has good size, athleticism, technique, with very good strength, and an excellent football I.Q. who has the ability to become a definite impact player at the next level. He has room figuratively and literally to grow and has yet to reach his peak as a football player.

He’s an instinctive player who will get better and better with good coaching and will improve with more experience. He is relentless with a non-stop motor. He’s a top 20 talent and if he’s there at #21, would be a great addition to the Patriots’ defense. And would provide a needed boost to the pass rush.

A highlight video reel from College Films can be seen here: