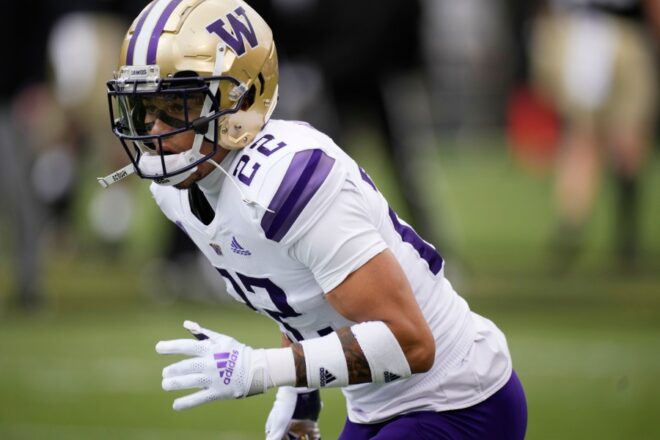 The Patriots need some big-time additions at cornerback. Last year, they traded away Stephon Gilmore and then J.C. Jackson bolted for the Chargers in free agency. Thus far, they’ve made only a minor addition, former Texan CB Terrance Mitchell. With Jalen Mills, Joejuan Williams, Shaun Wade, and Justin Bethel also on the roster, they’ll look to add at least one, probably two more corners to rebuild their depth.

The team traded for Wade last year, but they don’t really know what they have there, as he barely saw the field in 2021. But he’ll get a chance to compete for some reps this spring/summer. Mills is best suited for the Jason McCourty role but played on the outside last year

Trent McDuffie. from Washington is another cornerback who would immediately raise the level of play at the position and provide some sorely-needed depth.  In an earlier draft profile, we looked at Andrew Booth from Clemson. We will profile some other corners and other positions in the upcoming days.

McDuffie has a very good amount of athleticism (check✔), very good agility, and quickness in coverage. Despite his average-to-below average size (5’11,193), he’s an aggressive, tenacious run defender, and a rugged competitor with outstanding route awareness and excellent play speed (ran a 4.4 at the combine).

McDuffie has the ability to play man coverage or zone, and his aggressiveness and sure tackling make him a plus in run support. McDuffie has the versatility to play either on the boundary or out of the slot, but the team already has Jonathan Jones returning from his shoulder injury and Myles Bryant there so he’ll play on the perimeter.

McDuffie is only 21 years old and is outstanding covering receivers in the short-to-intermediate range with his twitchy athleticism and the good makeup speed to cover receivers deep.

– Intangibles, leadership is off the charts

– May struggle against larger wide receivers

– Faced less than stellar competition in his last season

Excellent, he can be an above-average gunner or returner

NFL.com draft analyst Daniel Jeremiah has McDuffie as the 2nd CB taken in the draft, going to the Jets at #10 overall.

“McDuffie is an ultra-clean player on tape,” Jeremiah said in his draft assessment of McDuffie in a mock draft. “He’s quick, fluid, tough, rarely out of position, and can play the ball. He’d upgrade the Jets’ intriguing mix of talented young players at the position.”

McDuffie has the Football I.Q., agility, sure tackling will make him popular with the Patriots coaching staff, if he falls to them at #21. He has the talent to be one of the league’s top corners before the end of his rookie contract according to NFL.com draft analyst Lance Zierlein.

Possessing very good speed with elite quickness, he has the tools (route recognition and mirroring routes to WRs) to be a tremendous cover corner in either man or zone. He flies upfield in run support and his football savvy and natural leadership will make him a captain and team leader on the field in very short order.  The question with him is where he will end up in the draft. But if he’s still there at #21, he’d be a great fit in Foxboro.