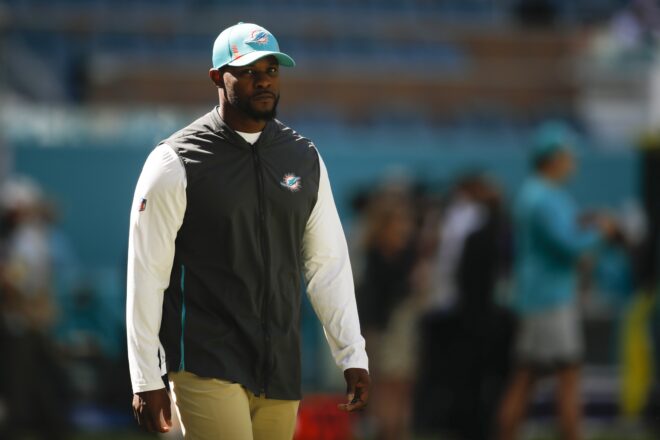 (Editor’s Note: Portions of this article appeared in this morning’s “Five Things to Know” column)

For anyone who missed it, former Patriots coordinator and Dolphins’ coach Brian Flores appeared in an interview on “I AM ATHLETE” that aired on Tuesday night, which was definitely interesting.

The former coach, who has since been hired as the senior defensive assistant and linebackers coach for the Pittsburgh Steelers, spoke about a variety of situations during what was a one-hour sit-down with Dolphins beat writer Omar Kelly, Chad Johnson and Brandon Marshall.

Flores didn’t hold much back, talking about topics that included the fact he was never willing to bend when it came to losing games intentionally, as well as an interesting revelation that surprisingly didn’t immediately get a lot of attention in that he refused to sign his separation agreement, which cost him the remainder of his guaranteed contract but gave him the freedom to speak his mind as well as file his lawsuit.

He was fairly candid in the interview, and one thing that was interesting is that while he’s currently trying to improve racial diversity around the league, it sounds like he’s spent time at least trying to come up with ways for the league to improve the situation.  Flores told the group he believes the NFL should involve a little more oversight in the hiring/firing process.

“I think there’s got to be an oversight committee for hiring and firing throughout the National Football League and just kind of a standardized review process at every position,” said Flores.  “Someone who is, maybe it’s a federal monitor, maybe it’s a collection of individuals who aren’t affiliated with the team that are overseeing the entire process and saying ‘Hey, that guy’s very qualified’ and ‘That guy had an impressive interview’ – it’s an oversight committee.  And I think that will create a more equal and fair environment.”

It’s an interesting notion, and as the league continues to try and acknowledge and work through the issue, some of Flores’ ideas do have merit and it sounds like discussions have already been had.  This lawsuit continues to have a lot of layers to it and there’s no question that changes will be coming as he continues pushing for change in that process.

Obviously, one other big area of discussion has been the text exchange with Bill Belichick, which has made quite a few headlines.  He talked a bit about his relationship with his former mentor and what he took with him to Miami and said in his mind, there aren’t any ill feelings toward him and believes he’s the”GOAT” and was definitely his biggest coaching influence.

“Bill Belichick’s the obvious [choice], obviously I learned a great deal of football from him,” said Flores.  “I think the one thing people don’t know about Bill is he listens,” said Bill.  “If you have, and again, you have to earn the right for him to listen, but if you have an idea, if you have a thought, if there’s a match-up that you think that we can win, a part in a game…he’ll listen.  He may add something to it, he may throw it out, but he listens.  And I think that’s one of his greatest strengths and something I tried to take from him when I was in Miami.”

When it comes to the infamous text exchange that played a large role in the suit, Flores wasn’t mad but said it just essentially confirmed what he thought already.

“I’m not mad,” said Flores.  “Bill did what a lot of us … he sent a text message to the wrong person, I’m certainly guilty of that before,” said Flores.  “To me, I thought it was specific to the lawsuit in that it confirmed a lot of things I thought were going on…that I think a lot of Black minority coaches think are going on.”

READ NEXT:
While Not a Top Need, Patriots Adding a Receiver This Offseason Would Make an Already Talented Group Even Better
Posted Under: 2022 NFL Offseason
Tags: Bill Belichick Brian Flores