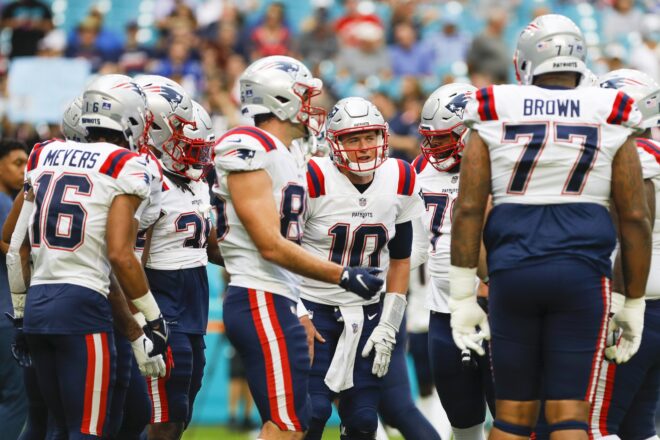 The New England Patriots quarterback situation lasted for a season, with Rookie Mac Jones leading the team to a 10-7 record in the regular season. That made Jones the first rookie quarterback to start in a playoff game.

While the Patriots’ campaign came to an aggressive and swift end at the Buffalo Bills hands curing the Wild Card round, New England and Bill Belichick aren’t going anywhere. Here are the Patriots games for 2022, including the match outlook and a recap for the 2021 season.

While the New England Patriots recorded a respectable 10-7 season in 2021, their campaign ended in a not-so respectable fashion. The patriots were taken out by the Bills, who dominated almost every facet of the game. Their regressed defense faced multiple injuries throughout the season, picking an awful time for their worst match of the season.

The Patriots didn’t have any positive answers for James Allen, as they suffered one of the worst losses of the decade. However, the team had several positive things happening in 2021. Most notably, the Patriots’ three top rookies (Christian Barmore, Rhamondre Stevenson, and Mac Jones had a great first season.

Several of their main free-agent signings (Hunter Henry, Matt Judon, and Kendrick Bourne) performed very well. As such, while their season ended on a sour note, their roster proved to be where they should have been over the last few years.

An Early Preview of the New England Patriots 2022 Opponents

Following their blowout at the hands of the Buffalo Bills in the playoffs opening round, the New England Patriots will not be on the field again for almost eight months. However, it’s never too early for fans to look ahead for incoming games, especially if you like making trips to watch the Patriots play. Unfortunately, the exact dates for their next season matches are yet to be revealed, but the team knows who they’ll be facing.

In 2022, the Patriots will head to Vegas for the first time to play against the Raiders. This game is probably one of the best to bet on and for fans to watch in 2022, as it remains one of the best matchups for New England.

The Raiders will be fresh from their first playoff game in five years, but questions are looming over this franchise. The team let go of manager Mike Mayock shortly after losing in the playoffs and their interim coach Rich Bisaccia is not poised to stay either.

As the Raiders continue searching for their net head coach and general manager, there’s a possibility that the Patriots will see some familiar faces on the Raiders sideline. The team player personnel director Dave Ziegler is being considered for the general manager’s position, while linebacker coach Jerod Mayo might be the next head coach. However, Josh McDaniels is also another candidate for the job.

The last time that the New England Patriots traveled to Lambeau Field, fans were treated to a classic game between Aaron Rodgers and Tom Brady. Rodgers is still with the Green Bay Packers, but Brady hasn’t been with the Patriots for years.

Rodgers helped Green Bay become the NFC’s No 1 seed for the second consecutive year in 2021 and he may be the next MVP winner. However, the 38-year-old quarterback has expressed his desire to shift from Green Bay and he’s expected to leave the squad at the end of the season.

Even if Aaron Rodgers leaves Green Bay, the Patriots squad isn’t spectacular right now. The Packers are expected to travel to Arizona and play the Cardinals who qualified for the 2021 playoffs but are arguably as bad as New England after qualifying.

If you enjoy an offense game, the Bengals have remained among the most fun teams playing in the 2021 season. Under the leadership of quarterback Joe Burrow, the team ranked seventh in the number of points per game (27.1) in the regular season with the second-year quarterback throwing 34 touchdowns and 4,611 yards.

The addition of receiver Ja’Marr Chase on the team has been a big reason for the surge of Joe Burrows. These former college teammates have cemented themselves as a great quarterback-receiver duo and the pair could prove too much for New England to stop.

With Jones or Chase becoming the most likely winner for the offensive rookie of the season this year, the 2022 matchup will be an entertaining revenge game for any of the players that won’t win the award.

Speaking of revenge, the New England Patriots will have a chance to pay back the Colts in 2022. Their week 15 loss against the Colts was the first win for Indianapolis against the Patriots in over a decade. The loss also marked the beginning of the Patriots’ downturn in the 2021 season.

In their last game, the Colts took a 20-0 lead and the Patriots tried to fight back by scoring 17 points unanswered. However, Jonathan Taylor gave the Colts the win with his 67-yard touchdown run that gave him 170 rushing yards that day.