4 months ago at 8:24 am ET
Follow @MarkMorse5
Posted Under: Patriots News 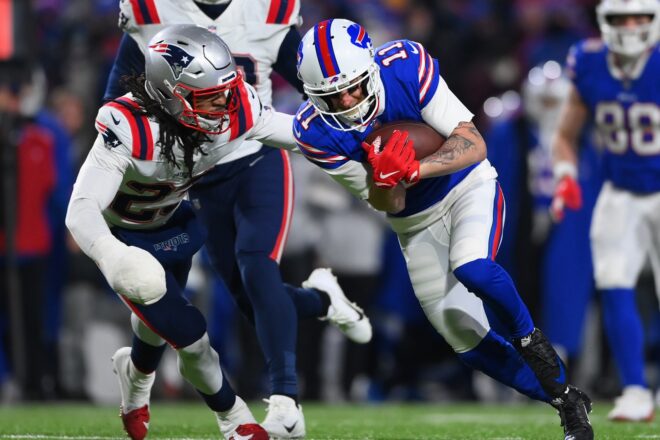 Ahead of this game, many talking heads have said that if the Pats lose to the Bills that it was a disappointing season.  I don’t see it that way.  Our expectations were pretty low when the season started.  The play of rookie Mac Jones at QB and the surprising improvement of the defense over the 1st 13 games gave us false hope of going deep into the playoffs.   When the team went up against the iron of the league, the Patriots’ weaknesses got exposed.  Despite the playoff loss, this was a very good season considering where we came from.

Mac Jones will forever be compared to Tom Brady, fair or not.  I will just say this, Tom Brady had a full year under Drew Bledsoe as his mentor.  There was no expectation of Tom Brady as a 4th string on the depth chart, 199th player selected in the draft.  In year two, when Bledsoe went down in week 2, Brady stepped in and the rest is history.

Jones numbers are actually better without the benefit of having a year to acclimate to the life in the NFL.   Jones didn’t have Drew Bledsoe as his mentor.  The expectations heaped upon Jones when he was selected with the 1st round, # 15 pick were tremendous.  I think the future is bright with Mac Jones at QB.  He will get stronger, as Brady did after year one.  Some of those passes that have not been fired in there will get fixed in year two.  Jones has that same intangible, doggedly doing everything he can to get better and improve.  Jones is a true rookie.  The last rookie to win a playoff game was Russel Wilson in 2013, an upset of the Washington Redskins.  No rookie has ever made the Superbowl.  Brady was technically not a rookie, but a second-year player.  I am not saying Jones will be better than the GOAT.  Just acknowledging the performance he has accomplished this season.

Over the course of the next few weeks, I will do a roster evaluation by position groups.  First, will be the upcoming Patriots Free Agents.  I will also be reporting on the draft and everything leading up to it.  Two All-Star showcases are in the books already and the week of February 5th, the Senior Bowl practices, and game as well as the East/West Shrine game on February 3rd will be held.

By: Ian Logue
Being fast is a terrific asset to have but for rookie RB Pierre Strong Jr., being able to do everything in the New England Patriots'…
4 hours ago

By: Robert Alvarez
The New England Patriots pay tribute to team Hall of Famer and broadcaster Gino Cappelletti following news of his passing.
3 days ago
wpDiscuz