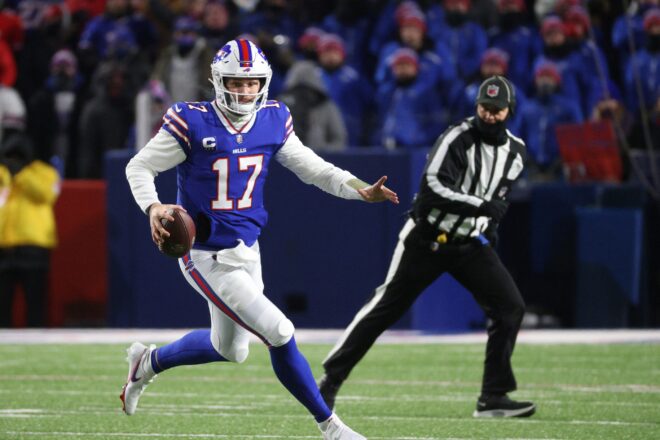 Some thoughts following the Patriots Wild Card loss out in Buffalo:

1) Following Saturday night’s frustrating loss in Buffalo, a lot of people seem to be questioning the future of Mac Jones, who obviously came out of this game 0-1 in his first playoff outing.

However, after rewatching the game, it definitely feels like that criticism is a bit unfair. Jones’ play out in Buffalo was fairly solid, with the rookie finishing 24-of-38 for 232-yards and two touchdowns. He did have two interceptions but both were situations where you just have to tip your hat to the Bills for making a couple of good plays.

But as for the outcome itself, a lot of what went down during New England’s debacle out in Buffalo had little to do with Jones.

One of the things that stood out is the fact that Jones didn’t seem bothered by the moment. Despite playing in his first playoff game in an unbelievably cold and hostile environment, he looked fairly unphased. His execution was mostly on point, and as Bill Belichick has said previously, sometimes the opponent just makes more plays. That was essentially the story Saturday night and as we know, the NFL is a game of inches and the Patriots found themselves on the wrong end of several moments where Buffalo simply could do little wrong.

Jones’ first interception was one example. He made a fairly good throw to Nelson Agholor on a deep pass to cap off the club’s opening offensive drive, with Jones lofting what looked to be a potential 34-yard touchdown to answer after the Bills went down and scored to go up 7-0.

Unfortunately, the ball was just slightly underthrown, and defensive back Micah Hyde ended up making a terrific over-the-shoulder interception to snatch the ball away from Agholor, which was just a good play on his part. However, when you go back and look at that drive, Jones did essentially all you could have hoped for. He made a great throw to Hunter Henry on his 30-yard gain, and he alertly got away from the defense on the 3rd-and-10 where he picked up 16-yards and got the first down to extend the drive. It’s just frustrating that Hyde was just able to both get himself in great position and come away with the turnover.

He also had several other terrific throws and with this being his third time facing Buffalo, Jones recognized quite a few looks where they were coming after him and he maneuvered away and extended the play. Granted, there were moments where it wasn’t perfect (the underthrown ball to a wide-open Hunter Henry was one of them) but overall, he did about as much as fans could have hoped and showed more than enough where people should be feeling good about who he’ll potentially be next season.

At the end of the day, asking him to match Buffalo score-for-score was way too much and the killer was simply the fact that as the lead grew, it forced New England out of their offense. Jones is at his best when they can run play-action and stay within what they do well. When that shifted, it took away one of the Patriots’ biggest strengths, which was their ground game.

But overall, it wasn’t the offense that was the problem on Saturday night, it was their defense that ultimately let them down. No team can overcome allowing their opponent to score touchdowns on seven straight drives. Even Tom Brady, as good as he was/is, couldn’t overcome a similar situation in the Super Bowl against Philadelphia when New England’s defense got them off the field just twice all night, with the Eagles getting points on 8 out of 10 possessions.

Needless to say, expecting a first-year quarterback to do the same is a little unrealistic. But in terms of blame, Saturday night’s loss certainly doesn’t fall squarely on his shoulders. Far from it.

2) There’s been some discussion regarding Jones’ ceiling and the comparisons between Derek Carr and Andy Dalton, which the rookie should hopefully have put some of those to bed.

While Jones still needs to get a little stronger, unlike the two players he’s been compared to, one of the things that stands out is how well he processes things and how rarely he makes a really bad play. There were only a handful of plays all season where you were left wondering, “what was he thinking?”, which if you’ve watched Dalton or Carr for any period of time, the two are inconsistent at best in that area.

In fact, there are quite a few games that you’ll typically see in a season where their play played a fairly significant role in a given loss. Jones wasn’t perfect this season, but there were maybe a couple of losses where he could be shouldered with a decent amount of the blame. The rest were just a combination of things that didn’t necessarily have anything to do with him.

You can make up for physical limitations when you’re incredibly smart and you see things really well. Jones possesses both of those attributes and that’s largely why he outperformed the rest of his rookie peers and ended up being the only one playing in January.

Given a full offseason to get stronger and with a full season of experience under his belt, it’s hard not to feel a little excited about what the future might hold now that New England appears to have someone who can lead them going forward.

3) The one good thing about this loss is that it’s likely going to motivate Belichick to make some difficult decisions this offseason, which is going to be interesting to say the least. One of the things that was obviously noticeable is that the Bills roster is one of the fastest we’ve seen this season, with a lot of similarities to Kansas City.

New England simply didn’t have the personnel to match it. Buffalo exploited match-ups against Ja’Whaun Bentley and Myles Bryant, and Kyle Van Noy couldn’t keep up with Josh Allen when he got outside and took off. Devin Singletary and Isaiah McKenzie are both unbelievably quick, and there really isn’t anyone on their roster, especially with McKenzie, who can deal with that type of player. Stefon Diggs was another guy who gave them problems, with J.C. Jackson ending up on the wrong end of a few frustrating plays as Diggs caught 3-of-4 targets Saturday night.

All that being said, injuries quietly played a large part in that. Not having Jonathan Jones was brutal, as this was a game where they badly needed him and he had really been coming along prior to getting hurt. Matthew Judon struggled to get pressure and disrupt the passing game, which has seemingly been an issue since he dealt with COVID-19. With the team unable to really do much to keep Allen from firing dart after dart, it made for a long night.

As a result, given the shift in the AFC to where the Bills are now reaching the level of where the Chiefs are in terms of speed, New England is going to need to get faster this offseason in order to compete with either of those teams in January.

4) One of the biggest topics this offseason is likely going to center on the future of J.C. Jackson, whose days in New England are probably over.

Jackson will most likely see a big payday this offseason, which is unfortunate given his value to the team defensively. At the same time, while Jackson is an outstanding player and a solid coverage corner with good instincts, he’s not yet a shutdown corner and Saturday night definitely left a bit of a mark on him.

His ability to read plays and make a break on the ball has been one of his strengths, along with the fact that he has good hands and he’s a smart player. However, the price he’ll likely receive this offseason will probably be well out of reach of what the Patriots will be able to pay him, which will probably mean he’ll be playing elsewhere in 2022.

That being said, as good as Jackson has been, he’s not yet at the level of a #1 shutdown corner, which is probably why the Patriots will let him walk this offseason. It would be great to see them potentially poach another player or sign an up-and-coming defensive back like they did with Stephon Gilmore, but it’s obvious after the debacle that happened on Saturday night that they definitely need a little more help in that area, especially if they’ll potentially be heading into next season without Jackson.

5) That being said, New England needs to get better up front and build around rookie, Christian Barmore. Barmore was banged up but did a good job getting some pressure, but the Patriots didn’t have anyone that could make a play once Allen was flushed out. This was a problem all season against any type of mobile quarterback, not just Allen, and it was a glaring issue.

They definitely need to upgrade that unit and build some depth, because the issues against the run late in the season became more exposed when they started facing better competition. Whether or not that will be through the draft or free agency remains to be seen, but with the way everything fell apart on Saturday, it’s clear that against upper-echelon clubs, they definitely need to get faster and stronger this offseason if they hope to knock off Buffalo in 2022.

It should definitely make for an interesting offseason. While losing in January stings, hopefully, it’s just the start of some changes that will lead to a better outcome next year.