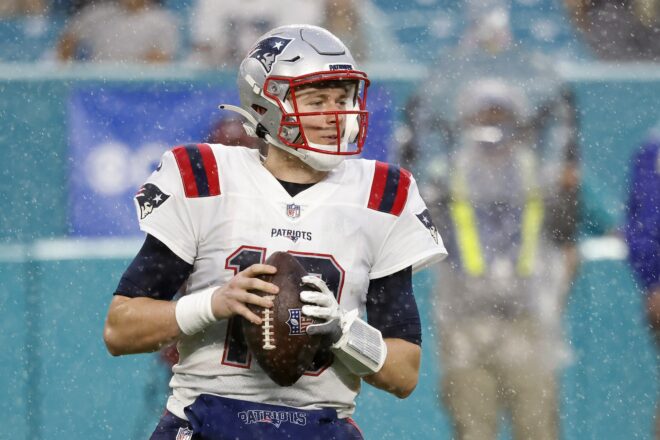 Some thoughts coming off of Sunday’s Patriots vs Dolphins fiasco in Miami:

1) Late season games down in Miami continue to be an issue, and for anyone hoping this new era with Mac Jones might break whatever streak of bad luck the Patriots might have down in Florida at this point in the season, unfortunately, it didn’t work out that way.

You’ve got to go all the way back to the 2016 regular season to find the last time New England won late in the year down in Miami, which was a 35-14 victory back on New Year’s Day.  But since then, in games that have fallen in December or later, they’ve lost each visit.

Miami’s scripted first drive set the tone early in this one, with the Dolphins opening with a 13 play, 77-yard drive that ended with Tua Tagovailoa connecting with Jaylen Waddle hauling in a 7-yard touchdown to give them an early 7-0 lead.  That seems to be an issue as of late, as teams have seemingly had success early in the contest moving the football.  New England has done a good job of adjusting and settling in from there, but Mac Jones’ early interception on the third play of the ensuing drive that was returned for a touchdown spotted the Dolphins a 14-0 edge that was ultimately too big of a hole to get out of.

The fumble on the exchange where Jones lost the football late in the third quarter was also brutal, as the Patriots were down to the Miami 22-yard line and appeared like they were on their way to getting points.  Instead, Jones couldn’t get a handle on the snap and the Dolphins ended up getting the football and it ultimately led to a field goal.

For whatever reason, weird things like that happen down in Miami and for anyone hoping that their luck might finally change, that certainly wasn’t the case on Sunday.

2) For some strange reason, the team sat Kristian Wilkerson, who was a standout the previous weekend.  Wilkerson reverted back to the practice squad following their win over the Jaguars, despite finishing the contest with four receptions for 42-yards, which included 2 touchdowns.

Wilkerson had replaced N’Keal Harry last week, who was a healthy scratch for the game but with Nelson Agholor returning to action, they obviously felt like having the bigger-bodied Harry on the field was a better match-up.  Unfortunately, Agholor struggled to settle back in after Jones was just 1-of-3 targeting him, although Agholor did make a nice grab that went for 23-yards on his lone reception.

Given this weekend’s match-up against Buffalo, it wouldn’t be a shock if Harry is back in there as they’ll likely try and run the football against a Bills team that was unbelievably physical in the previous meeting.  However, it will be interesting to see if maybe they change things up and possibly try and create mismatches with Wilkerson against Buffalo’s secondary.

Meanwhile, Harry finished without a catch after failing to haul in his lone reception on what was a lackluster effort on the route.  For whatever reason, despite being 18 weeks in, he doesn’t look any better now than he did in Week 1 and that continues to be the problem that the Patriots are eventually going to have to deal with.

3) Mac Jones had a tough time on Sunday down in Miami, with the rookie struggling against what was a pretty good game plan by now-former Dolphins head coach, Brian Flores.  Miami did a good job of getting pressure on him and made things difficult, especially on their first possession.  They gave Jones a look he wasn’t expecting and it baited a throw that Xavien Howard picked off and took back 37-yards the other way for the touchdown.

Give Jones credit, he kept fighting and for the most part, he pulled it together.  Unfortunately, the misery wasn’t completely over because he had the later miscue after center David Andrews went to the sideline with a reported equipment issue, which saw Ted Karras move over to center and the two missed the exchange on the snap and Jones lost the football.  The Dolphins recovered and it led to a field goal, and that sequence ended up being a killer because New England appeared to be on the verge of scoring and had that happened, it may have led to a different outcome.

Overall, he finished the afternoon completing 20-of-30 for 261-yards along with a touchdown and an interception.   However, you really can’t say enough about the way he’s played, especially considering the fact he’s already exceeded any expectations people could have hoped for.  He was fortunate that the game ultimately ended up not holding any implications as Buffalo ended up clinching the AFC East anyway with a win, leaving it as simply another learning experience that will hopefully help in seeing him continue to improve.

Heading into Saturday night, it should be fun to see how he responds and beating the Bills in their building and getting his first career playoff win would be a terrific way to put this one behind him.

4) Losing Christian Barmore at the end of Sunday’s contest was brutal and his outlook heading into this weekend is in question.

According to reports, Barmore suffered a knee injury when he collided with defensive back Joejuan Williams but the early prognosis appears to at least be promising.  The NFL Network’s Ian Rapoport reports that the MRI results were “clean” and that Barmore avoided a significant injury.

Given how things looked initially as he was carted off the field, Patriots fans can at least breathe a sigh of relief.  However, with Saturday’s showdown against the Bills now looming, it remains to be seen if he’ll be available in time for what’s about to be New England’s most important game of the year.

Barmore has been outstanding in his rookie season, with the former standout from Alabama solidifying a defensive line that has been tough inside thanks to his addition.  If he’s not able to go, he’ll be difficult to replace and his situation will definitely be one to watch heading into Saturday night’s contest.

5) The fact they played well enough to slow down the Dolphins’ offense without Kyle Dugger and Dont’a Hightower was the one positive to take away from Sunday’s loss, with both players missing the game down in Miami.

Dugger is dealing with a reported hand injury, while Hightower is nursing a knee injury.  With a playoff berth clinched, head coach Bill Belichick opted to sit two of his best defensive players on Sunday and while the result didn’t quite work out, it was still a solid showing by a group that despite falling into an early 14-0 drought minutes into the first quarter held the Dolphins’ offense to just 13 points the rest of the way.

Getting these two back for Saturday night’s contest would certainly be huge, especially for a Buffalo team who came into Foxboro and took round two in what was one of the most physical games we’ve seen all season.  With a chance to knock them out of the postseason, let’s hope that this time around, the Patriots can return the favor.

READ NEXT:
Patriots-Bills Week Wild Card Matchups, Who Has the Razor’s Edge?
Posted Under: 2021 Patriots Season