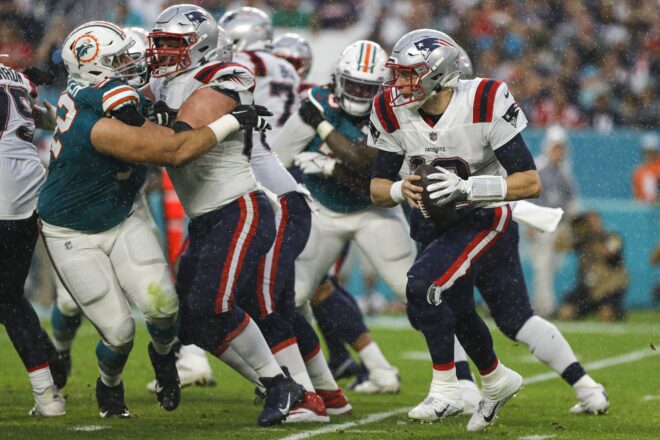 If there was a perfect way to put a bow on a thoroughly ugly afternoon in Miami, the Patriots saved it for last. If you were waiting for that fairytale 98-yard razzle-dazzle, Miami Miracle in reverse, storybook finish, you were disappointed.

Jakobi Meyers backward lateral had zero chance of doing anything other than putting a fitting epitaph on yet another frustrating loss. It was intercepted for a touchdown and finished the scoring at 33-24 and finish the season at 10-7. And the Patriots continue to play like…the Jaguars when they get off the plane in Miami.

Now they’ll have to travel back to Buffalo for a rubber match with the Bills. But a start similar today would be a quick one and done.

Forget the moral victory stuff, “they battled back”, “they showed resiliency”. This has happened too many times this season, they had plenty of opportunities to turn things around. But they came out in the first half like they were walking in cement and played putrid. When you dig yourself into a 17-0 hole, you’re not going to win many games. And doing that in the playoffs will get you blown out.

Forgive me if you’ve heard this before. Miami entered the game with a terrible running game (31st in the NFL) averaging a paltry 85.8 yards per game. But on Sunday, Duke Johnson looked like Derek Henry as Miami bulldozed the Patriots for 195 yards on the ground. That terrible offensive line of Miami’s? They didn’t look so terrible, which is a red flag heading into next week.

Miami’s opening drive was far too easy (heard this before?) as Tua Tagovailoa completed 7-7 for 54 yards and a touchdown to Jaylen Waddle who caught four of those including the 7-yard TD pass on 3rd and 1 where no Patriot was in the zip code. Miami relies on a short, (very short) passing game, utilizing quick slants, outs and crossers. The New England defense came out in the opening series like Tua was trying to heave the ball to Ft. Lauderdale, giving them an unbelievably soft cushion and Tua ate them up.

Granted, Tua, after that opening drive only passed for 55 yards for the rest of the game, but with a big lead, the Dolphins weren’t going to risk much with him throwing the ball, especially with how effective the running game was going. The Patriots’ run defense is a major point of concern entering the playoffs and regardless of who their opponent is, it will be something to monitor, especially after watching how badly hurt Christian Barmore seemed to be on that scramble by Tua that iced the game.

Speaking of injuries, although they both finished the game, running backs Rhamondre Stevenson and Damien Harris appeared hurt at times during the game and had to come out. That will have to be monitored this week. Isaiah Wynn left the game with an injury and didn’t return. The secondary right now is a MASH unit.

Not to be outdone the Patriots offense only took three plays to hand Miami seven more points on a terrible interception by Mac Jones. Just like that 14-0 and this game was looking a lot like too many games in Miami have looked.

Mac Jones definitely looked like a rookie in the first half, but in the second half, he made some really nice throws, including a couple to Jakobi Meyers and one to Hunter Henry. But, as has been the case several times this year, it wasn’t enough and the team came up short. But it wasn’t all on him, there were plenty of mental mistakes to go around.

On one key third-down incompletion, Jones threw to ball to the perimeter to no one. Both Kendrick Bourne and Nelson Agholor ran routes to the inside and were right beside one another. David Andrews had to leave for an equipment issue and when Ted Karras moved to center, there was a fumbled exchange between him and Jones that Miami recovered. It hurt since it appeared that the Patriots were within scoring range and it cost points.

Special teams’ gaffes hurt once again. While the penalty on Brandon Bolden on a fake punt followed a dropped interception by Devin McCourty and was a terrible call by the officials, who to be kind…had a bad day at the office. Miami kicked a field goal later in the drive.

But Lawrence Guy lined up directly over the center on a punt, giving them a 1st down which cost the team another three points. After the Patriots pinned the Dolphins in their own end a punt wasn’t fielded by Gunner Olszewski and it rolled for a 64-yard field position changer. Special Teams, normally a strength of the Patriots has been a huge disappointment, too many times this season.

The running backs once again had a solid day, Brandon Bolden led all rushers with 46 yards on 7 carries including a really nice 15-yard touchdown run where he made a double jump cut to the outside. He also hauled in two passes for 20 yards including a nice 18-yard touchdown pass from Jones. The Patriots ran for 134 yards, a 5.0-yard average, and 2 TDs. Harris chipped in 37 yards and a score on the ground while catching 4 passes for 36 yards. Meanwhile, Stevenson chipped in with 34 yards on 4 carries.

Hunter Henry and Jakobi Meyers were the main targets in the passing game, both had nice catches on deep throws by Jones. Henry had five catches for 86 yards while Meyers had 70 yards on 4 receptions.

So, the team is heading back to Buffalo, who clinched the AFC East with a 27-10 win over the Jets and allowed just 53 yards, and sacked Zach Wilson nine times.