1 year ago at 5:00 am ET
Follow @SteveB7SFG
Posted Under: Patriots Commentary 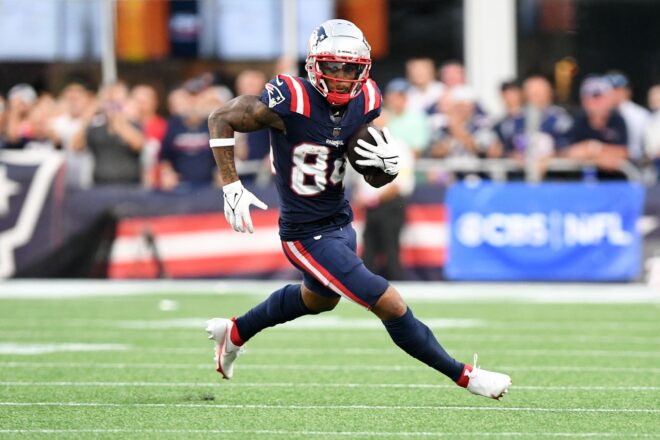 Good morning, here is your Sunday Patriots news 12-26 and notes.

Belated Merry Christmas wishes from all of us here and we hope that yours was a happy and safe one.

The Patriots and Bills meet today for essentially the AFC East crown. Although there will be two weeks remaining and anything can happen, a win today would give the Patriots a two-game lead over Buffalo. A Bills win gives them the tie-breaker over New England and with Atlanta and the Jets on the schedule, it would seem (on paper) that they’d win those matchups.

Kendrick Bourne: The Patriots’ wide receiver was removed from the COVID-19 on Christmas day and is eligible to play today versus the Bills. Bourne tweeted as such and it seems he’s going to go which is a bit of good news for the offense.

With Nelson Agholor out with a concussion and N’Keal Harry questionable with a hip injury, Bourne’s news is even more welcome. He has been one of Mac Jones’ favorite targets and he and Jakobi Meyers should see a lot of use in today’s game against the Bills.

Kristian Wilkerson: To replace Agholor, the team has elevated Wilkerson from the practice squad for today’s game. The wide receiver has been active in one game this season (Carolina). During the preseason, he was the most targeted and most productive receiver on the team. In three games, he was targeted 17 times, with 13 catches for 147 yards for an 11.3-yard average, (via preseason stats by Ian Logue).

Wilkerson, 6’1, 201-pounds, has been the team’s scout team wide receiver in practice this year, and his work was lauded by Josh McDaniels and who said that he believes he’ll be ready to go if called upon. He was a favorite target of Mac Jones during training camp and preseason, as both were getting reps with the second team.

Josh Uche: The Patriots linebacker was activated from injured reserve. He’s been practicing so it is assumed that he’s ready to go and it will be interesting to see if he’s among the players on the active roster. Deatrich Wise was placed on the Reserve COVID-19 list and is out for today’s game. In his place, DL Daniel Ekuale was called up from the PS again. He’s played well this season.

Rhamondre Stevenson: The rookie RB was also placed on the Reserve COVID-19 list and is out for today’s game. His loss is a big one at the running back position as both Damien Harris and Brandon Bolden were both on the injury report this week. Harris missed the Colts game with a hamstring injury he suffered in the game against the Bills a few weeks ago.

J.J. Taylor returned to practice this week after being placed on the COVID list. He could be active and see some snaps this week considering the state of the offensive players with injuries/illness.

Patriots 4th & 2 Podcast: If you haven’t checked out our PatsFans.com podcast, “Patriots 4th & 2” in a bit, please check it out. Derek Havens and I met to discuss the loss to the Colts and to preview the Bills game.

Buffalo Also Hit Hard With COVID-19 But Are Getting Dawkins Back:

With COVID-19 running rampant through the league again, we already listed the Patriots who will miss the game. Buffalo was not immune either as they lost WRs Cole Beasley and Gabriel Davis for today’s game.

Offensive linemen Jon Feliciano and Cody Ford were placed on the COVID list this week and joined DE A.J. Epenesa who remains on the list. But the team also got some good news when OL Dion Dawkins was removed from the COVID list and is expected to start today against the Patriots. DL Star Lotuleilei will miss the game (personal reasons).

J.C. Jackson Continues His Path to a Big Money Contract:

The Patriots cornerback is an unrestricted free agent next spring and he’s just the latest of the Patriots undrafted free agents (UDFAs) to play himself into a starting role while cashing in for a big payday. The Patriots’ secondary has three undrafted corners on the roster with Jackson, Jonathan Jones (IR), and Myles Bryant. Jackson has gotten his first Pro-Bowl nod this season.

But Jackson’s path was one that nearly ended with the young man in prison. The Enterprise from Brockton, MA, posted an in-depth and really nice article on Jackson by writer Greg Dudek this week that is worth checking out.

In 2015, Jackson was charged with an armed robbery, and faced four first-degree felonies – three counts of home invasion with a deadly weapon and one count of burglary of an occupied dwelling.  Each charge carried a minimum sentence of 10 years and a maximum of life in prison. At his trial, he was acquitted on all charges by a jury, but his athletic career was seemingly over.

He had to go to the Junior College route at Riverside in California and he put his nose to the grindstone, hit the books, and excelled on the football field. That landed him in the Big Ten with Maryland where he started 23 of 24 games before declaring for the NFL Draft after the 2017 season. Despite stellar play in Maryland, he didn’t hear his name called and was signed by the Patriots as a UDFA in 2018. It was a perfect union.  The Patriots under Bill Belichick don’t care where a player is drafted but judge them by how well they perform on the field.

Since entering the league, the 6’1, 198-lb Jackson has led the league in interceptions with 24 and is currently 2nd in the league with seven. He’s been steadily tracking upwards and as the #1 corner on the Patriots, he’s justified in generating a big payday next spring.

The slate of games for Week 16 and my predictions are straight up for this week.

“A lot of times, players, coaches, and teams can get caught up in things that are 1% of the game and you skip over something that’s 80% of the game. They do a good job of bringing things into focus, whether it’s fundamentals, communication, or techniques, and so forth. They’re, obviously, very respected and looked up to by, not only all their teammates but all the people in the organization.

‘m very fortunate to have both of those guys. They’ve both had great careers here and their careers have gone fairly parallel. They’ve been together for a long time. They’ve gained a lot of confidence and trust with each other working with each other. They can play well and communicate well with each other in critical situations or situations where we have to make adjustments. As I’ve said with the linemen, they’ve been through it before and they have a level of anticipation and confidence in their teammates. It’s been earned over a lot of plays and multiple years together. They’ve done a great job for us. Whatever I said would be understated.

Bill Belichick when asked about veterans Devin McCourty and Dont’a Hightower (via Patriots.com)