1 year ago at 6:00 am ET
Follow @SteveB7SFG
Posted Under: Patriots Report Card 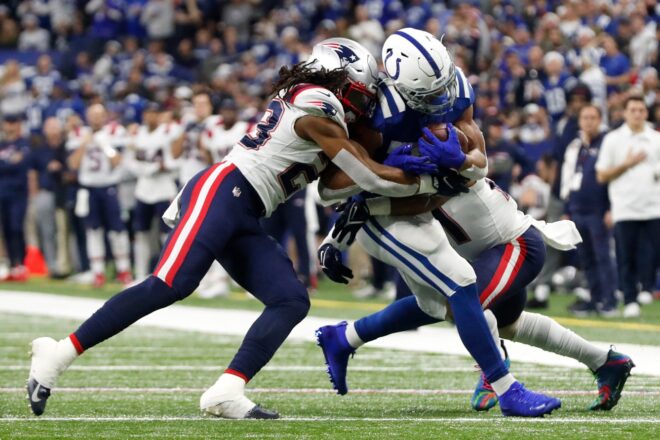 Apologies for the late submission for the weekly report card, there were factors beyond my control…but better late than never.

The Patriots came into the game on a seven-game winning streak but they left all that intensity, physicality, and smart play back home. Indy was also coming off a bye and looked like all of those things and then some. Turnovers, sloppy play, missed opportunities, bad penalties, and awful special teams’ play spelled doom for the team as they fell behind 20-0.

The Colts showed that they like to play bully ball too and had a 78-yard drive where they pounded the ball down the Patriots’ throats without throwing a pass. The touchdown was considered a pass but it was nothing more than a pitch…you get the idea. The Colts owned the line of scrimmage. The Patriots made some adjustments in the second half, but when they absolutely, positively had to have a stop, Jonathan Taylor blew through the defense for a game-clinching 67-yard touchdown. Offensively, the running game was non-existent.

So, here are our positional grades this week for the Patriots-Colts game. And now the team faces the Bills for what in essence will be for the division. A win gives the Patriots a two-game lead with two to go. A loss to Buffalo gives the tie-breaker to the Bills and they face Atlanta and the Jets in the final two weeks…you get the idea.

Mac Jones had a rookie type of game of three quarters, with two bad interceptions on back-to-back possessions. The first took points off the board right before the half. After a penalty backed the Patriots back to the Colts 13, he tried to hit Hunter Henry and threw it straight to Darius Leonard at the 3.

Jones finished 26-45 for 299 yards with 2 TDs and 2 INTs with a passer rating of 74.2. But he rebounded late in the third quarter and put together three scoring drives to make it a game at 20-17. This was without any running game, so it wasn’t all bad.

After the Colts’ first touchdown, Jones responded with a gorgeous deep ball that was right on the money to Jakobi Meyers who flat out dropped it. Not only did it cost the Patriots points but on the next play, the Colts blocked the punt, and boom it’s 14-0. Jones later made another great deep ball to N’Keal Harry for 43 yards and his second touchdown pass to Henry, under pressure was a very good play.

Rhamondre Stevenson and Brandon Bolden had precious little room to run on Saturday night as the Colts were getting penetration and stuffing the run at the point of attack all game long.

Stevenson had just 10 carries for 36 yards and he and Bolden combined averaged just 2.8 yards per carry. But it wasn’t for lack of effort on their part. Stevenson even got tackled by his own LT Isaiah Wynn on one play behind the line of scrimmage…it was that kind of night for the backs. Bolden did chip in with 3 catches for 41 yards in the passing game.

It was not a great night for Jakobi Meyers, who dropped a big deep ball that would have put them in scoring position. It was a big turning point in the game, as the Colts scored on the next snap off of a blocked punt. Meyers didn’t block Darius Leonard on a key 3rd and short-run and then got flagged for holding that negated a play that would have put them on the one-yard line. But he also chipped in with some key catches to move the chains.

Hunter Henry had his best game as a Patriot with 6 catches for 72 yards and 2 TDs, Those got the Patriots back in the game and at least gave them a chance to tie or win the game if the defense could have come up with a stop.

Jonnu Smith continues to be the hard-luck guy and had just five yards on two touches. He had a nice catch and run of 14 wiped out by a penalty…what else? It’s been that type of year from him.

The offensive line was manhandled by the Colts defense all night long and they struggled to open any holes for the running backs to run through. Isaiah Wynn, in particular, had a very rough night. He was turnstiled by DeForrest Buckner for a sack, and then on the ensuing possession, he was facing the wrong direction and knocked Stevenson down on a running play. He also got flagged for a false start in plus territory…ugh. Michael Onwenu got flagged for a false start that turned a 3rd and 2 into a 3rd and 7. That led to Bill Belichick opting for a field goal late in the game, which was the correct call. More to that below.

The pass protection for Jones only improved a bit, he was responsible for buying himself more time by sliding and moving in the pocket.

The defensive line was gashed for 226 yards and 5.8 yards per rush on the ground. The Colts’ offensive line, especially on first down was pushing the Patriots around on rollerskates it seemed.

In the second half, they seemed to be figuring things out but then the defense gave up the killer 67-yard touchdown. Deatrich Wise got the only sack but the pass rush overall wasn’t good.

The linebackers were a big part of the run defense getting gashed as well. Ja’Whaun Bentley was lost early in this one to an ankle injury and the loss of him and Kyle Dugger who was ejected didn’t help matters.  Dont’a Hightower and Devin McCourty both a shot at stopping Taylor on the game-clinching touchdown but whiffed.

Jamie Collins stepped in for Bentley and had a great athletic play going up and deflecting a Carson Wentz pass that was picked off by Devin McCourty. But he dropped an interception that could have been a pick-six.

The secondary play overall was good, although the Colts only threw the ball 12 times. The game plan was to slow the running game and force it into Wentz’s hands. And Wentz showed it was the right one. He made several poor decisions, including the interception by McCourty and the dropped ones by Collins and J.C. Jackson, who had three pass breakups.

If there was an issue with the secondary, it was in run support, where they could have played much better.

The Patriots’ Special Teams were flat out a disaster on Saturday night. Things started off badly and steadily got worse. Gunner Olszewski got stripped of the ball on the opening kickoff but luckily the ball rolled out of bounds.

Then after the missed Jones-Meyers connection, Jakob Johnson let Matthew Adams come right up the middle unblocked and he blocked Jake Bailey’s punt which the Colts recovered in the end zone for a touchdown. Later Brandon King jumped offside on a Colts missed field goal attempt, which they converted on the 2nd try.

On a night that the Patriots lost by 10 points, the STs units handed Indy 10 points with plays that were entirely preventable. For a team that spends as much time practicing STs and has so many roster spots tied to them, it is inexcusable.

The Patriots’ coaching staff had plenty of time to prepare for the Colts, but the way they came out playing would cause one to think that they were operating on a short week. All of the issues that plagued the team during the 2-4 start resurfaced. Sloppy play, bad pre-snap penalties, and turnovers all showed their ugly heads.

They didn’t look prepared and the Colts most assuredly did. They were flying all over the field and looked much faster than the Patriots.

One area that we did agree with was the decision by Bill Belichick to kick the field goal in the 4th quarter. As he pointed out, 4th and 7 deep in the red zone is tough to convert and the way the defense was playing in the second half, gave him the confidence that they’d get the ball back.

But the team is in first place in the division and currently owns the AFC’s top spot. We’re on to bye week and then the Colts.