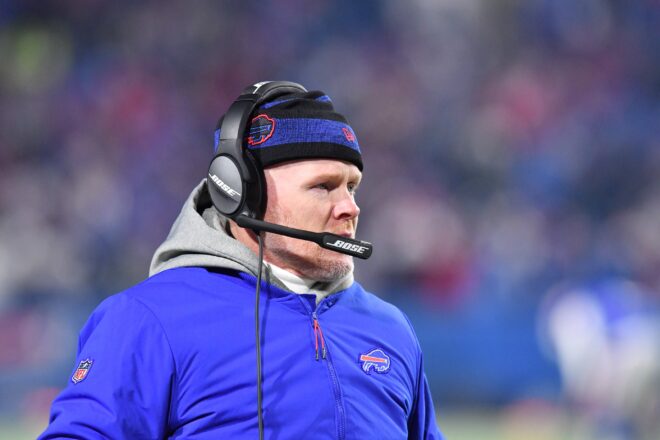 It was a wild night in Buffalo during New England’s 14-10 win over the Bills, and here are some thoughts on the victory:

1) Buffalo Bills coach Sean McDermott was seen fuming quite often during Monday night’s broadcast, which was a little funny to watch given that it has to be frustrating to see New England already back as a dominant team after having finished 7-9 last year and giving Buffalo one season in the sun.

Instead, that one bad campaign boosted them high enough to grab what appears to be a solid quarterback of the future in Mac Jones, and just like that, the Patriots are back to being a thorn in his side again.

Having come into Monday night’s game with eight wins already this season, McDermott’s club had an opportunity to kick Bill Belichick’s team down a few notches and stop a six-game win streak.  He had a tough environment and the weather on his side, with it being unbelievably windy and miserably cold.  That should have been enough to make life tough on Jones and put the game in Buffalo’s favor.

Instead, it worked against him.  Belichick seemingly came into this game having already told his team they were going to pound the football and pummel the Bills all night, which was evident by the game plan.  Jones threw the ball just once in the first half as New England then went on to run the football 32-straight times, pounding Buffalo’s defense as they methodically kept moving the chains on each drive.

With what little lead they had built, it was just enough to keep the ball out of Buffalo’s hands and New England controlled the game for most of the night.

Meanwhile, it clearly drove McDermott crazy.  You could see him on the sideline imploring his players to stop them, but both Damien Harris and Rhamondre Stevenson each ran hard and kept making enough plays to extend the drives as New England’s offensive line kept beating up on the defense. He was also seen pleading with the officials at multiple points in the game and was about as animated as he’s ever been in any of these recent match-ups.

The whole approach seemed to have him beyond frustrated. On the other side, it was a terrific job by Belichick to go after a Bills’ defense where they clearly saw a weakness.  But the bigger thing that stood out was the fact they maintained the patience and discipline to keep going after it.

Reporters asked McDermott about the game plan by Belichick after it was over, and it clearly struck a nerve.

“Let’s not give more credit than we need to give credit to Bill Belichick in this one,” quipped McDermott via NESN.  “Whether it was Bill or anybody else, they beat us, right? But you sit here and you tell me when we start with an average starting field position of the 40-yard line and he starts with the 23-yard line — I’m rounding up in both cases — and we were 1-for-4 in the red zone and they were 0-for-1 in the red zone? You give me that ahead of time, I’d say I like my chances.”

Sounds a lot like sour grapes, and the fact his club managed just 10 points against New England’s defense while the Patriots’ offense ran 32 times in a row against his defense while allowing 222-yards rushing is a fact that obviously isn’t sitting well.

However, seeing McDermott completely lose his composure shows you that he knows he has his work cut out for him. Instead of likely thinking the Patriots were no longer a factor, they’ve instead already retaken the AFC East and that’s a reality he’s definitely not pleased with. 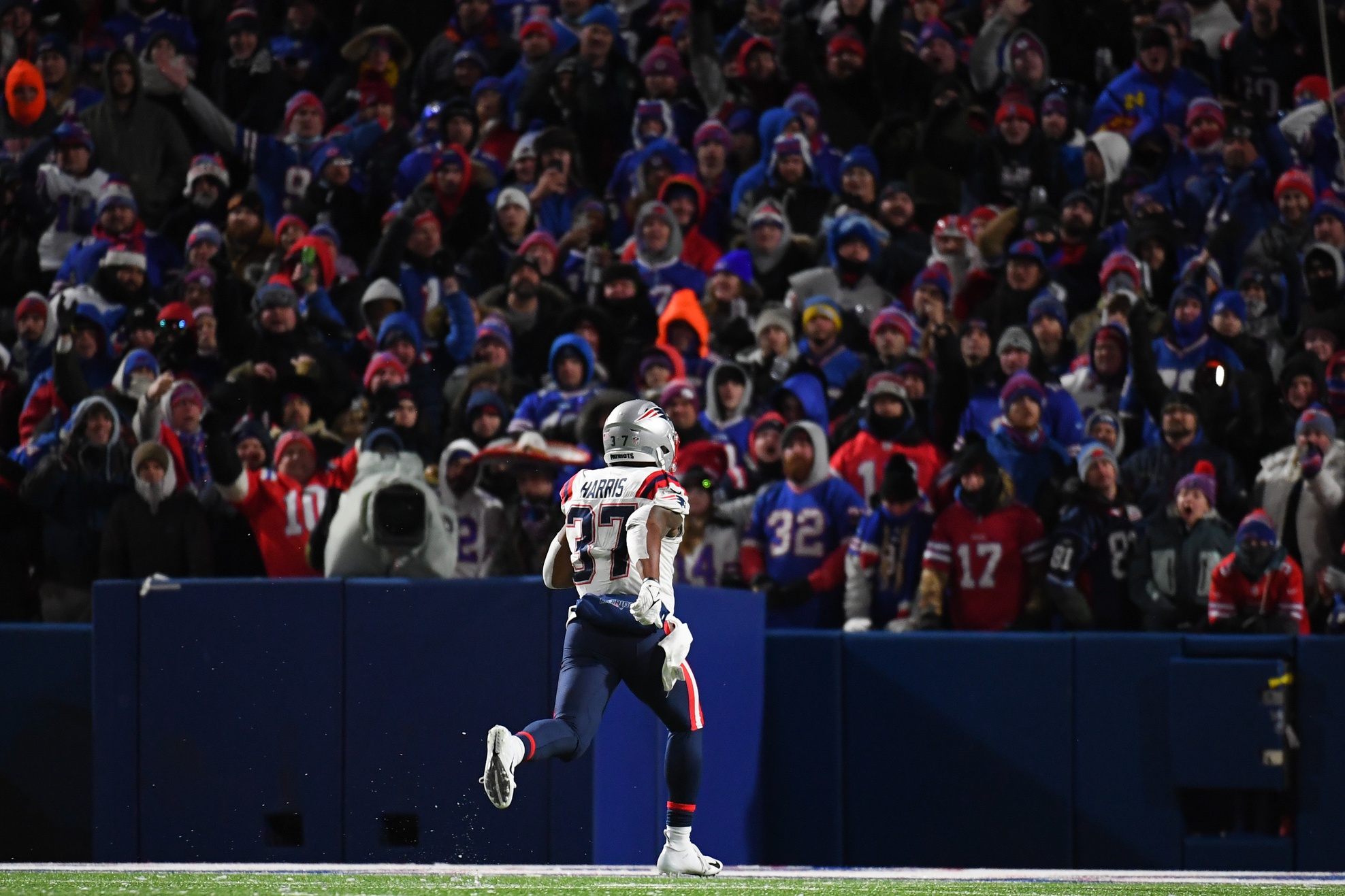 2) Damien Harris and Rhamondre Stevenson were both terrific Monday night, but Harris was just fantastic before eventually suffering an apparent hamstring injury.

The running back made his presence known early in this one, with Harris breaking through on a 3rd down carry on their second possession of the contest, which saw him run away from everyone as he took off 64yds for the touchdown to give the Patriots an early 8-0 lead after they converted the 2pt conversion.

He also came up with a big run late in the third quarter that he might have scored on had he not pulled up lame with a hamstring injury, which seemed to creep up on him right before the half.  Instead, the run went for 22-yards, and played a role in the Patriots keeping the football out of the Bills hands for the rest of the quarter.

That was big because prior to that, the Bills had the wind at their back to begin the second half. However, aside from just a field goal, they weren’t able to do anything more with it.

Meanwhile, Stevenson ended up finishing off that drive as New England went 59yds on 14 plays, with Nick Folk hitting a 34yd field goal early in the fourth quarter after the field flipped and the Patriots had the wind behind them.

Both Harris and Stevenson’s ability to get tough yards, especially during that quarter, were critical in the victory and now, fortunately, they’ll both get to rest over the next two weeks.

3)  N’Keal Harry was terrific blocking as the Patriots manhandled the Bills, but it’s hard not to be a little frustrated at the muffed punt early in this one, which even made this a game to begin with.

What was aggravating was the fact Harry was surrounded and he failed to get clear of the football after deciding he wasn’t going to catch it.  The ball ended up glancing off his face mask when Harry seemingly lost where it was, which happened on the ensuing drive after New England’s defense came up with a stop and kept Buffalo from getting any points to answer Harris’ 64yd touchdown run.

It was obvious that the veteran wideout was also unaware it had touched him, because he just stood there and didn’t jump on the football.  Instead, the Bills alertly did, and one play later they scored thanks to a 14yd pass from Josh Allen to Bills receiver Gabriel Davis.

Buffalo settled for the extra point instead of the 2pt conversion and the Patriots maintained the 8-7 edge.

Fortunately, Harry’s contributions in the ground game at least made up for it.  But he continues struggling to find a place to make additional contributions and that certainly wasn’t one of his better moments.

4) Devin Godchaux was outstanding on Monday night as he did a tremendous job disrupting the Bills offense and causing problems. He made life tough for them all night, playing a big factor in keeping them from getting into any kind of rhythm.

Godchaux racked up a team-leading 10 tackles, including a key one when the Bills had ended up with first-and-goal from the six-yard line early in the fourth quarter.  He dropped Bills running back Zack Moss for no gain on first down, setting up the opportunity for Matt Judon to drop Allen for a 9-yard loss on a sack on the next play.  Allen then threw incomplete on third down and it forced Buffalo into a field goal that sailed wide right.

That ended up being a critical possession because had they been closer and converted that field goal, it would have potentially changed how the end of the game played out.

However, both he and Lawrence Guy were terrific Monday night and had big roles in the victory.  But that sequence was definitely one that stood out and it’s plays like that which don’t always draw a lot of attention, but they certainly end up being important. 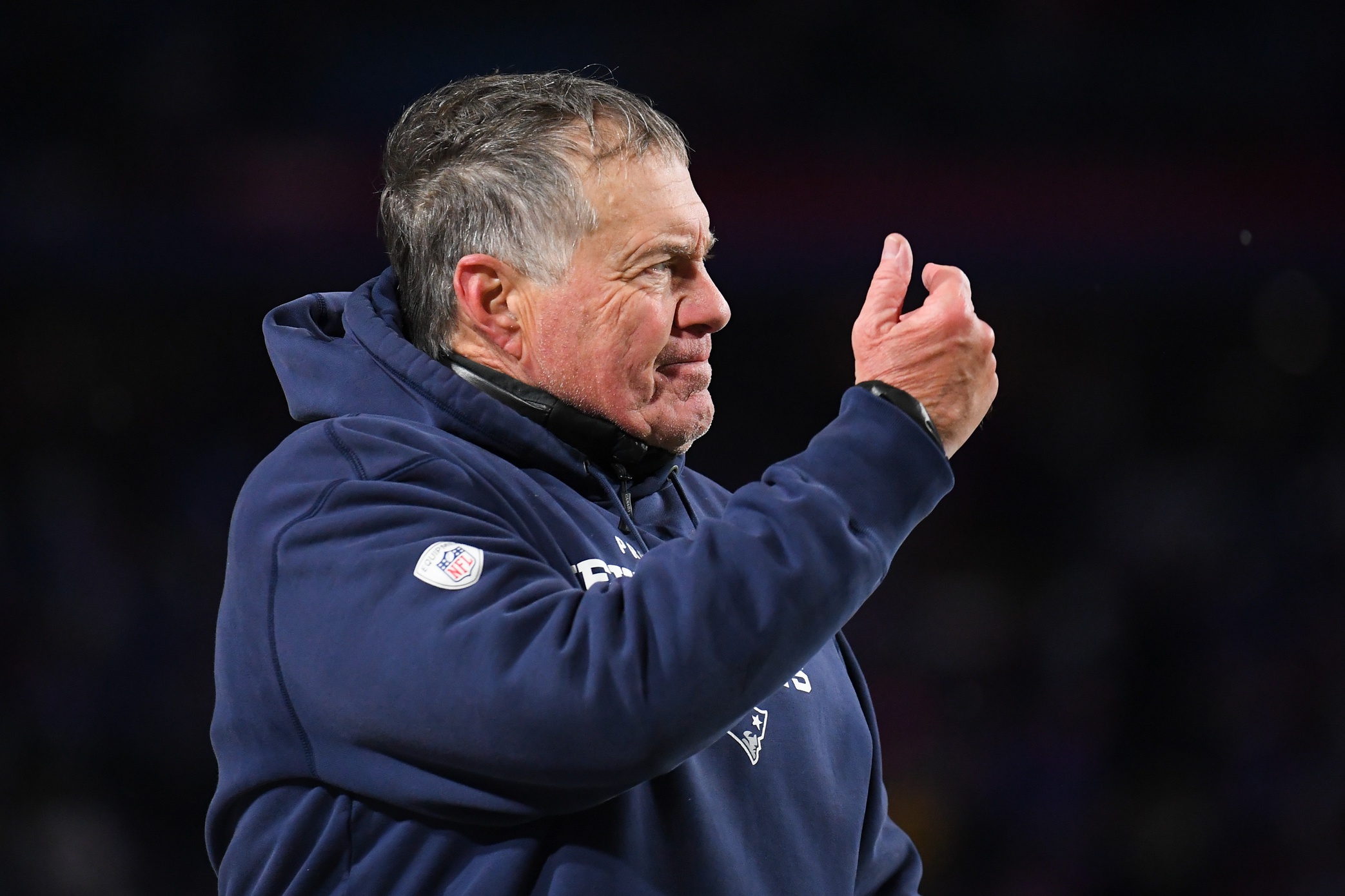 5) The fact Mac Jones threw just three passes Monday night is an unbelievable asset for the Patriots.  Had the game plan not worked out, they would have had to turn to their passing game, which would have given Buffalo film to work with heading into their next match-up.

Instead, New England walks away with this one having simply beaten the Bills physically, while reserving their entire passing game for their next meeting in three weeks.

While Buffalo obviously has film of Jones’ past performances from this season, they walked away with nothing from how New England might have attacked them through the air from this specific match-up.  That’s quietly a pretty important advantage, as Belichick may have already had that on his mind when they put this game plan together.

Belichick laughed about it on WEEI Tuesday morning, saying, “The pass plays we have, they haven’t seen. We can use all of them next time!”

He may have been joking, but the fact he said it shows he knows what he was able to accomplish.  Having last night played out the way it did has to have him pretty happy this morning.

The two clubs will meet in three weeks after New England’s battle against Indianapolis but, for now, the Bills defense finished last night having essentially only seen 3 snaps in-person of the Patriots’ passing game.

Their second match-up will, fortunately, take place on their terms at Gillette Stadium on December 26th.

I thought it was the fault of the Patriots coaching staff who put Harry in a position to fail. Jeff Howe tweeted that Harry had a punt clang off his mask in pre-season of his rookie year and he was never allowed to return again. Why was he out there? When Belichick was questioned about this in the post-game press conference he mumbled something incoherent to the effect we have to [work] on ball handling.