1 year ago at 8:56 am ET
Follow @SteveB7SFG
Posted Under: Patriots Report Card 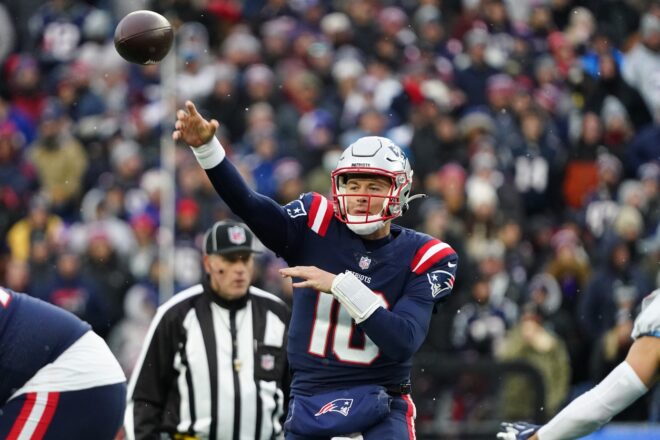 The Patriots knew they were in for a physical rock fight against a very good but beat-up and undermanned Tennessee Titans. Bill Belichick’s post-game comments to the team said it clearly. It was a tough contest. But on a day where the Patriots didn’t play their best football, they hung tough and still were able to come through and win by 23. But it was definitely not clear sailing until the fourth quarter.

What a crazy season it has been. When the Patriots lost the O.T. game to Dallas to drop them to 2-4, many fans and media alike were writing the season off. And more than a few hysterical types who overreact to every play on Sundays were openly calling for Belichick to be fired…These last six games put a halt to that quite nicely. Now, there are debates going on if he’s the NFL’s Coach of the Year. Yes, it has been THAT type of season.

Sunday’s game was much of the same as we’ve seen this season. But this time, unlike earlier in the season the Patriots were the ones playing cleaner football and took advantage of their opportunities. The Titans owned the line of scrimmage and gashed New England’s defense for 270 yards. But the Patriots forced four turnovers while not turning it over on offense.

Nick Folk was 5-6 kicking including a 52-yard field goal. Randy Bullock doinked a 44-yarder off the upright and then did it again on an extra point. Those four points were key at putting the Titans in an early hole. Tennessee also made costly mistakes on STs. Their first 59-yard punt put the Patriots in a hole but a penalty on them and resultant shorter punt and 15-yard return gave the Patriots the ball in plus territory. They quickly scored to make it 7-0.

So, here are our positional grades this week for the Patriots-Titans game. And now the team is right out of the frying pan and into the fire with two of the next three against the Buffalo Bills.

Mac Jones’ first small taste of winter went well. It wasn’t as cold as when the Titans came in here for a playoff game in 2004, and it just snowed a few flakes but much like the coaches have eased Jones into the offense, Mother Nature eased him into winter.

Jones had his share of mistakes, especially his miss of a wide-open Hunter Henry which should have been an easy 26-yard touchdown. While he IS still a rookie QB, his overall play doesn’t suggest that. With each passing week, he’s looking more and more like an established veteran.

His first touchdown pass to Kendrick Bourne was a beauty where he dropped the ball right in the bucket where only Bourne could catch it, even with tight coverage. The best part, Jones threw it with perfect anticipation and it was exactly where he wanted it and Bourne to be.

Kevin Byard erred in calculating Jones’ arm strength on the Patriots’ 1st and 20 when he drilled a perfectly placed dime 38-yards down the field to Jakobi Meyers. He had other nice throws to Meyers, Jonnu Smith, Henry for a key 1st down later in the game.

Jones didn’t have his best game and yet he completed 23-32 for 310 yards with 2 TDs and 0 INTs for a passer rating of 123.2 while averaging 9.7 per attempt. Folks, those aren’t just good numbers for a rookie QB.

Rhamondre Stevenson and Damien Harris had nowhere to run in the first half, which continued into the third quarter. But the team stayed patient and eventually in the fourth quarter, they started to find their stride. The Patriots finished with 105 yards rushing and while it was less than they have averaged during the winning streak, Tennessee came in allowing only 83 yards per game.

Rhamondre Stevenson finished with 9 carries for 46 yards but his 19-yard run where it seemed like three-quarters of the Titans’ defense had a shot to bring him down was a highlight that will resonate with the coaches.

Damien Harris ended up with just 40 yards on 11 carries but his 14-yard touchdown run was a perfect exclamation point on the day. Brandon Bolden was superb on third down catching four passes for 54 yards. He is giving Jones another viable target on third down.

The wide receivers were leaned on much more on Sunday since the running game wasn’t getting untracked. And they delivered. From the aforementioned Meyers 38-yard pitch and catch to Bourne’s nice grab in the back of the end zone. But the highlight was a 3rd and 6 to Bourne on a crossing route where he had an easy 1st down but he kept running from left to right and when he reached the sideline juked a defender and then did a toe-tap along the sideline, somehow staying in bounds for a 41-yard touchdown.

It was nice to see the offense getting Jonnu Smith more involved, especially against his former team. Smith had a nice 9-yard run on a jet sweep and then added three catches for 49 yards in what was his best game as a Patriot. The 20-yarder from Jones when he rolled out was a nice play call by Josh McDaniels.

Hunter Henry had just two catches for 16 yards but Jones missed him badly a couple of times including a play where he was wide open for what would have been a 26-yard TD. His numbers would have looked a lot better, but it is what it is. It sounds like a weekly thing here, but it is nice seeing the Patriots’ offense using the tight ends again.

The offensive line had another mixed bag on Sunday. For three quarters they couldn’t run the ball at all. But as they built up a lead in the 4th quarter when Tennessee knew they were going to run it, the offensive line came alive. The team had seven rushes for 60 yards which averages out to 8.4 yards per rush. That was the way to put the game away.

Tennessee got some pressure on Jones (some of which he needs to recognize quicker) with some blitzes, but he was only sacked twice, once by Byard who came from deep in the secondary. Like the rest of the game, it was far from perfect.

Wynn had another holding penalty, but coming into this game the talk was of Tennessee’s pass-rushing tandem of Jeffrey Simmons and Harold Landry. Between them they had zero sacks, zero QB hits, and zero tackles for loss…that counts.

The defensive line was gashed for 270 yards on 39 carries which works out to a whopping 6.9 yards per rush. They were getting stood up at the line but then the Titans’ offensive line would surge and the backs would find huge creases in the line. The worst one was right before the half. Facing a 3rd and 3 from their 32, Tennessee’s Dontrell Hilliard burst up the middle where Christian Barmore had burst up inside and was sealed. The linebackers were cleaned out and Devin McCourty was stuck in no-man’s land. The result was a 68-yard touchdown…ouch.

But the linemen were also making plays. Davon Godchaux forced the fumble from Hilliard in the first half that saved points. He also had a QB hit. Lawrence Guy had a run stuff for a loss. Deatrich Wise had a pass from Ryan Tannehill batted down at the line.

The run defense which has been very good needs to tighten things up before next week in Buffalo.

The linebackers were also up and down on Sunday. They share the blame for the running game numbers. On Hilliard’s TD, Dont’a Hightower and Kyle Van Noy were playing coverage and got sealed too easily. Matthew Judon lined up offsides and got flagged for roughing the QB but that one seemed a bit ticky-tack, even watching it again.

But they made plays too. Judon got a sack, his 11.5 of the season. Hightower tipped a pass, Van Noy batted down or deflected three passes and forced a fumble. Ja’Whaun Bentley sealed the deal with a strip-sack…so it was another mixed day for the front seven.

The secondary quietly had a very good game. Tannehill completed just 11-21 passes for 93 yards with a TD and an INT. J.C. Jackson had two big game-changing plays that factored into the win. On the first, Foreman was in the midst of a big 31-yard run when Jackson caught up with him and then punched the ball out. Jalen Mills alertly dove on it. On the second big play, Tennessee had a 4th and goal pass get tipped by McCourty and Jackson snagged it giving the Patriots the ball on the 20.

Mills is playing some very good coverage opposite of Jackson and besides his fumble recovery had two pass breakups. Kyle Dugger recovered one of the fumbles. Other than the long TD run, Myles Bryant got beat by Chester Rogers but Tannehill overthrew the pass. But it is a very good day when your secondary allows less than 100 yards passing.

The Patriots’ special teams are rounding into form at a perfect time. Nick Folk is damn near automatic and had another fantastic day going 5-6 on FGs with a long of 52 yards. Jake Bailey punted just once for 48 yards with no return inside the 20. The coverage units on kickoffs were excellent. Gunner Olszewski had a solid day returning punts and kicks. Contrast this with the issues Tennessee had on STs and this went a long way in determining the outcome.

The Patriots’ coaching staff knew the Titans would come out hard and be physical, despite being shorthanded. Things didn’t work out the way they envisioned but they adapted and overcame a tough team. Josh McDaniels gets high marks despite the 2-5 in the red zone. With the Titans taking away the running game, it makes it hard for the offense to score when you’re one-dimensional.

But once again, the Patriots’ first scripted series ended up with a touchdown. And he knew Tennessee was good at defending the short passing game so they targeted the deeper intermediate areas and Mac Jones was very good at hitting most of those throws.

The Patriots now have two of their next three games against the Bills. To say that these games are big for both teams is the understatement of the year. These next three games (Buffalo, Indy, Buffalo) have playoff implications. Six weeks ago, many people were writing off this team. Now…here we are. We’re on to the Buffalo.