1 year ago at 5:00 am ET
Follow @MarkMorse5
Posted Under: Patriots News 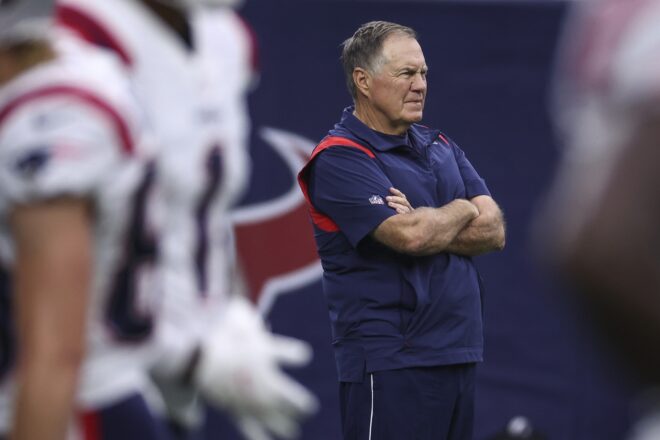 Last season was a disaster for Dallas.  They lost QB Dak Prescott to a broken ankle in week 5 and the season went down with him.  They turned to Andy Dalton then Ben DeNucci and finally present Patriots Practice Squad QB Garret Gilbert.  In addition, the Offensive Line lost Tackle Lael Collins and Guard Zach Martin. Injuries also devastated the defensive side too.  Gerald McCoy never got on the field, Trysten Hill tore his ACL, Dontari Poe only lasted half the season.  Leighton Vander Esch played just 10 games after 9 the season before.  Despite all this, the Cowboys won 7 games and that was enough to win the putrid NFC East and make the playoffs.

What did the Cowboys gain from that disaster last season?  Tony Pollard emerged as a legitimate backup to Ezekiel Elliott.  He can take some of the workload off Elliott.  TE Dalton Schultz has emerged as a force in the league.  He is presently the top TE in the league.  Cee Dee Lamb has eclipsed Amari Cooper as the #1 wide receiver on the Cowboys.   Tyron Smith and Zach Martin are two of the best offensive lineman in the league and are perennial Pro Bowlers.  Lael Collins has been suspended again for a failed drug test (he tried to bribe the tester).   That’s a break for the Patriots.  Not too much of a break as the Cowboys have been a well-oiled machine this year on Offense scoring 34.4 points per game.  Dak Prescott has brought balance back to the offense.  He is 122 of 165 passing for a 73.9% completion rate.  The average play is 8.3 yards and he has thrown 13 TDs to 3 INTs.  He carries a 116.9 passing rating.

Prescott stats through 5 games this year are better than last year’s first 5 games.  Stability in the passing game has also worked wonders for the run game.  Elliott is 85 carries for 452 yards, 5.3 average, and 5 TDs.  Pollard has chipped in with 51 carries for 325 yards. 6.4 average and 1 TD.  Don’t sleep on Dak Prescott because he can run and scramble out of the pocket.  The Patriots can’t lose containment because Prescott will burn them.  He has only run the ball 19 times so far this year.  That is just how the Dallas coaches want it.  Don’t expose the QB to unnecessary hits.  Prescott has been sacked 9 times in 5 games.

Dallas has a big tell when they align in a 3-WR set.  In previous seasons, they pass out of this 3-WR formation 75% of the time.   Worst, they run out of all other formations 90% of the time.  I don’t think the numbers are as skewed this year with the emergence of Dalton Schultz.

This is a new and exciting defense led by 1st round pick LB Micah Parsons.  Parsons will line up anywhere on the field.  He has the speed and mobility to play defensive back if needed.  He leads the team with 2.5 sacks.  You need to account for him no matter where he lines up.  The Cowboys said goodbye to Aldon Smith and recently cut Jaylon Smith.  Another big surprise for Dallas is the development of 2nd year, ball-hawking CB Trevon Diggs from Alabama.  He has 6 INT in 5 games so far this year.  He was listed as limited in Wednesday’s Injury Report. had Diggs as a DNP.  Dallas took 8 defensive players out of 11 picks in the 2021 draft.  Rookies LB Jabril Cox and DT Oga Odighizuwa are also starters.  Dallas is also glad to have Leighton Vander Esch back healthy to give the young defense some stability.  Dallas is only giving up 23 points a game.

Zuerlein has been fairly consistent this year, going 9 for 11 with a long FG of 56 yards.  He is also 17 of 19 on extra points.  Seems every team is missing extra points.   Bryan Anger is an average punter with a 45.5 net average.  He has kicked 13 punts but put 7 of those inside the 20.

The bottom line is the Patriots will have to play their “A” game on defense as they did against Tom Brady and Tampa Bay.  They will need to come out strong and fast, control the tempo of the game if they want to be close with Dallas.  The Patriots will have to play mistake-free football on both sides of the ball.   Mac Jones must continue to progress and it would help if he could score more TDs rather than FG when in the Red Zone.  I liked the no-huddle offense and running the wildcat, especially if Jakobi Meyers was back at the wildcat position.    They will also need a good performance from Special Teams.

I think it will be a close game with the Patriots having an opportunity to win the game in the 4th quarter.   This is the national game of the week on CBS with the “A” team broadcasters of Jim Nantz and Tony Romo.