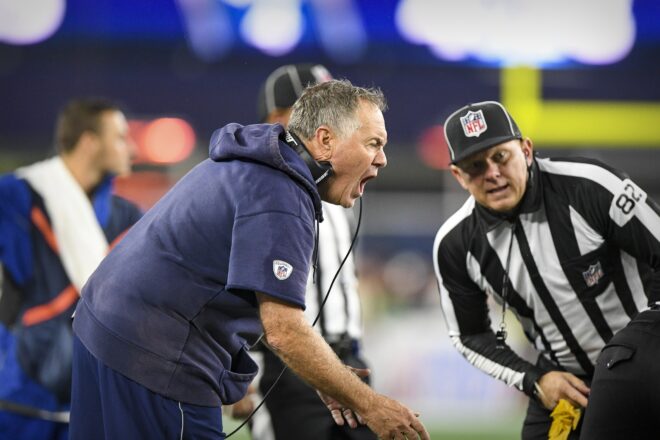 It was a terrific, entertaining, and competitive game.  For the most part, I think the Patriots effort was strong, but the execution is still having far too many breakdowns.

This team could easily be 4-0 this season but for several recurring problems.  First, there are far too many breakdowns by veteran players. On every play, they need all 11 players to be on the same page.  One breakdown and the play is broken up or the Defense gives up a big play.  Second, ball security is not a priority of the playmakers.  It is Bill Belichick’s priority but that does not seem to be getting through to the players.  Third, the Defense is not creating turnovers.  The only win came when they had 4 interceptions against a rookie QB.  They are losing the turnover battle.  Fourth, the lack of big plays on offense.  Jones threw two TD passes, one short of the goal line and the other at the 1 on a play-action that froze the LB and Safeties.  Jones needs time to throw downfield.

What would you think if the Patriots could be 4-4 at the mid-point (17 games) of the season?  It is a real possibility.  Houston and NY Jets should be wins.  Can they beat Dallas at home?  It is going to take time and as each game comes, Mac Jones will get better and all those new free agent players will become accustomed to the Patriots way.  I would have loved to be in the room when Bill Belichick reviewed the game film of last nights game.

This analysis is way too negative. Yes, many things didn’t go right, but there were bright spots as well. Just thinking about the game, many people would have been skeptical that the Patriots would be on the verge of taking the lead with less than a minute to go. What a game – I am proud of the Pats for what they we able to get right. I can’t fault BB for trying the FG at the end when the kicker has been so reliable. He hit the goalpost, so certainly not an unreasonable gamble. My biggest concern is the… Read more »