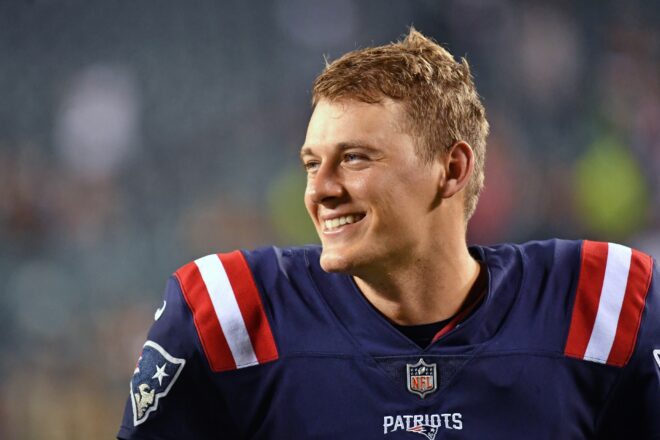 Looking at some Patriots-related numbers, something stood out when comparing Mac Jones’s first two games as a Patriots quarterback compared to Tom Brady’s first two contests in 2019.

Given similar talent levels and the fact they both had the same offensive coordinator, the numbers were oddly not that far off:

Brady obviously held the edge in touchdown passes, but it was interesting to see how close the two were when it came to pass attempts.  Jones has actually thrown the ball five more times than Brady had at this point two years ago, while Brady also had 138 more yards passing.  Jones’ accuracy has been as advertised, as even with all the pressure he’s seen during the first two weeks, he’s still been terrific from that standpoint.

Much of the discussion has been their lack of success in the red zone, but while Jones is just 3-of-6 to this point with one touchdown, Brady was just 5-of-10 with just one touchdown pass of his own over the same span.

Jones talked a little bit about that during his press conference on Wednesday, pointing out that while the goal is always to score points, it’s also to make good decisions with the football and know when you just need to move on to the next play.

“I think, obviously, you want to score touchdowns and you can’t be too conservative or too not…you kind of just have to do what you do and read your reads and the points will come,” said Jones. “But at the same time, sometimes you have to know when to call it quits on a play.  Like you know maybe, ‘Hey, this doesn’t feel right’ or something went wrong, so you kind of just have to know when to call it quits and throw it away and move on to the next play.  Sometimes, the next play is a kick, so you just have to accept that.”

The rookie also admitted that it’s not always an easy choice to make, but given how the plays are set up, he knows it makes more sense to be smart and move on.

“It’s hard when you’re really competitive,” admitted Jones. “You want to keep the play alive or you want to hold the ball or whatever the situation may be, but at the same time, you have a clock in your head of when things are supposed to happen.”

Hopefully, as Jones said, the points will start to come in the coming weeks as the rookie continues getting more comfortable in the offense.  He’s confident they’ll get better and they’ll try to take the next step this week against the Saints.

“I think we’ve definitely improved, and we just have to continue to do that,” said Jones. “So we will, and it just goes back to practice and fixing what we can fix, and then keeping everything that we know and that we’re good at in our back pocket, and when it comes up, we know how to do it.”

10 FINAL OBSERVATIONS FROM JETS vs PATRIOTS:

While going through the film to add the snap counts for this week, there were a few things that stood out:

1) Mac Jones’ sack on first drive was one that seemed to have come up in discussion a few times, with some questioning the rookie for taking a sack in that situation as it knocked out any shot the team potentially had at kicking a field goal. However, looking back at the film, Jones never had a chance to get rid of the ball. Right tackle Yasir Durant let his guy get around him, as did Isiah Wynn, which left Jones surrounded the moment he finished his dropback. From there, he had no opportunity to throw the football, which forced him to simply tuck the football and go down. Trent Brown’s injury clearly remains a problem, and hopefully, he’s getting a little closer to returning.

2) Great job by Devin McCourty to tip the deflection back to J.C. Jackson on one of Zach Wilson’s interceptions. Jackson made a leaping deflection that caused the ball to float up into the air and before the receiver could try and knock it down. From there, McCourty leaped up and tipped it back toward Jackson, who came up with the turnover. McCourty could have easily attempted to pick the pass off himself but instead made the alert decision to tip it to a teammate. Needless to say, it was well-played by the veteran and was one of the subtle moments that was worth noting.

3) Durant was not great on Sunday. He was responsible for multiple hits on Jones, including one on the first play of the drive coming off of the Jets field goal with just under 10-minutes to go in the second quarter where Jones was hit, sacked, lost the football, and Durant need up being the one who made the recovery. Jones tapped him on the helmet for being alert enough to avoid the turnover but, that’s, well, not ideal. He would go on to give up another sack on that drive on a 3rd-and-19 and New England would be forced to punt.

4) The 24-yard floater from Jones to Jakobi Meyers with just under six minutes to go was an absolutely beautifully thrown ball by Jones. He’s shown tremendous accuracy on his deep attempts and as he continues settling into this offense, it’s going to be hard not to be a little excited about what he’ll be able to do as the offense evolves and he has a little more time to work back there.

5) Rewatching the intentional grounding penalty, that one is still bizarre. Jones thought he spiked it near James White’s feet, but White is so quick that he was too far out for the refs to give Jones the benefit of the doubt. Looking back at the play, if Jones could have instead lofted over the defenders, White may have been off to the races because most of the defense was coming back to the left. Definitely not one of the rookie’s best moments.

6) Terrific job by Jalen Mills and Jonathan Jones on the interception by McCourty early in the third quarter. As soon as McCourty came up with the football, Dugger came surging in to block out the receiver, with Jones alertly blocking out his own guy, which helped spring McCourty’s return. Kyle Dugger and Dont’a Hightower also played a key role, absolutely leveling offensive lineman Greg Van Roten before McCourty was finally tripped up. Dugger and Hightower made the hit at the exact same time, with Van Roten ending up landing flat on his back after the play. Hightower looked better Sunday than he did in Week 1, so hopefully, it’s just a matter of him continuing to get reacclimate himself after opting out of 2020.

7) Seeing Mac Jones surge in on Damien Harris’ 26yd 3rd QTR touchdown run to help push the pile might go down as one of the best things we’ve probably seen a QB do in a long time. While his “block” for Kendrick Bourne was a little nerve wracking, the speed in which he flew in and helped push Harris forward was fun to watch, along with seeing him celebrate after the fact. It’s hard not to love the energy from a guy who in his press conferences is quite laid back, but it’s obvious that he’s winning the locker room over, much like Tom Brady did back in 2001 when everyone really rallied around him following Drew Bledsoe’s injury.

8) The belly rub dance with Carl Davis following his sack with Matt Judon during Sunday’s game was entertaining. It was fun watching them celebrate after Davis broke through and took Wilson down, and better yet, it stalled one of the Jets’ few good drives of the day and forced a field goal, which sailed wide left.

9) J.J. Taylor showed some nice acceleration during his runs on Sunday. The Patriots definitely have a formidable backfield this season, which coupled with Jones’ terrific play-action ability should be fun to see how things continue to evolve offensively.

10) Jones got drilled on a run play with just over 3-minutes left to play when they lined up Jakob Johnson in tight but he couldn’t come back across fast enough to stop Folorunso Fatukasi, who nearly broke up the handoff from Jones to Harris. He ended up ripping Jones down, with the rookie quarterback staying down for a brief moment before getting back up and walking upfield to get his group ready for the next play. Again, the protection will need to improve in the coming weeks if they hope to keep him healthy.

But all-in-all, not a terrible afternoon for a team that ended up getting their first win of 2021. Now they’ll just be looking to potentially take another step forward when they battle New Orleans this Sunday.