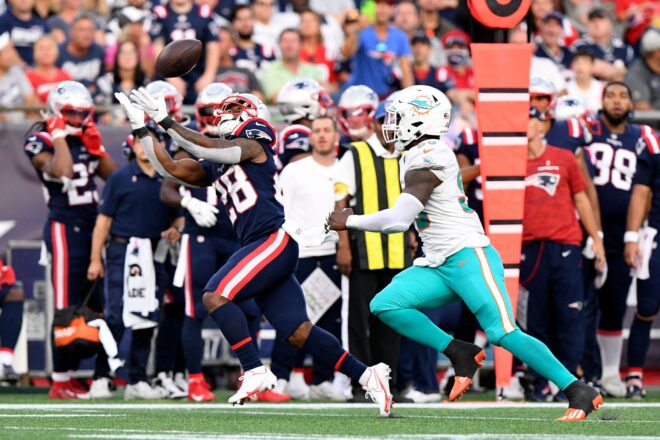 Sunday’s loss to Miami was certainly frustrating and here are some thoughts coming off this one as the Patriots end up 0-1 to begin the 2021 season.

1) Rookie quarterback Mac Jones definitely exceeded expectations on Sunday, with the rookie finishing 29-of-39 (74%) for 281-yards and 1 touchdown on the afternoon.  The Patriots checked nearly every box that should have allowed them to walk away with a win.  They were an astonishing 11/16 (68.8%) on third down, with Jones accounting for a significant amount of that total after completing 9-of-12 (75%) for 89-yards over that span.

He also kept them out of long-yardage situations.  Of the 16 third downs they faced, they were in 3rd-and-4 or less on 8 of them, including being in 3rd-and-1 six times.  That led to a significant number of long drives, with the offense being out on the field for a minimum of 7 plays on all but two possessions on the afternoon, including three drives of 14 plays as they held the ball for nearly 40-minutes.

But the biggest issue was the fact they couldn’t punch it in when they needed to after they ended up 1-of-4 down in the red zone.  Looking closer, it’s hard to put that on Jones.  The rookie was 2-of-4 down in the red area, which included a touchdown pass to Nelson Agholor on a ball that Jones fired to the veteran, who made a nice move and took it in for the score.  The other missed opportunities were caused largely by turnovers or penalties, which ultimately were the difference in the game.

Fortunately, Jones finished the contest without a turnover, throwing all but two passes with fairly good precision.  His first miscue came on the opening drive where he threw it at the feet of Jonnu Smith on what could have been a disaster since it was a backwards pass and therefore, a fumble, that New England recovered.   His next was a pass attempt to Jakobi Meyers that he threw too far out in front and the ball initially glanced off the receiver’s hands but Meyers stayed with it and ended up keeping it from floating into the hands of a defender.

Needless to say, the rookie essentially had two bad throws out of his 39 attempts.  That’s a strong first showing for a player they clearly believe in, but it’s just unfortunate it didn’t translate into a win.

Harris Started Strong, But Had a Disasterous Finish:

2) Running back Damien Harris started off the afternoon in impressive fashion, taking off on a 35-yard gain on the first offensive play from scrimmage to get New England into Dolphins territory.

The only problem is, it would be his final carry that will be the one that he’ll likely be thinking about this week.

With the Patriots trailing 17-16 and driving deep into Miami territory, Harris fumbled away the football on the Patriots final offensive possession of the game.  After taking the handoff on a 1st-and-10 from the Dolphins’ 11-yard line, Xavien Howard ripped the ball out of Harris’ hands and Miami recovered, which ended up sealing the win for the Dolphins.

Harris’ final carry gave him 100-yards on the afternoon, marking his 4th career 100-yard game but that stat won’t mean much considering the outcome.  It’s too bad, because he had put up a pretty terrific showing prior to that play, including rebounding from a scary moment earlier in the contest where he lost his helmet on a carry and was down for a bit after the tackle.

If nothing else, it should leave him motivated to bounce back next Sunday, which will obviously be important considering this one comes on the road in what will likely be a hostile environment.

The Rookie QB Showed He Can Sling It:

3) Getting back to Jones, it’s clear that he’s farther ahead than many thought he might be, which should be something where Josh McDaniels is going to need to trust him a little more.  The play calls saw a conservative approach throughout this one, with Jones hitting the check down on many of them, while also taking advantage of the shots he had when they were given to him.

He was pinpoint accurate for most of the day, including on his deep attempts, one of which was a perfectly thrown ball to James White that dropped in over his shoulder for a 26-yard gain.

Mac drops it in the bucket to James White pic.twitter.com/wHKMlK2g9C

He also nearly hit another big one on a long throw to Meyers, which was knocked away at the last moment by former Patriot, Jason McCourty.

Don’t get me wrong, the quick throws were largely likely done to try and keep Miami from getting to him.  But as the game went on and Jones settled in, it’s surprising that he didn’t get a few more chances to take a few more shots.  Consistently asking him to sustain long drives and control the clock will be tough to do against opponents where they’ll need more points, and Jones showed that he’s capable of making big throws.  However, it didn’t help that he had other big plays that were called back by a miscue, which leads us to our next point.

4) Turnovers and penalties were really the story in this one and ended up being the difference.  New England committed 8 penalties for 84-yards, which were untimely, to say the least.

Here’s a quick summary of the key ones on the offensive side of the ball:

2nd QTR: Isaiah Wynn – A holding penalty he committed negated a 13-yard run by Harris on a 2nd-and-10 from Miami’s 14-yard line.  Jonnu Smith would later fumble on a 3rd-and-14 after he picked up 7-yards and lost the football as he tried to hurdle a defender.  Fortunately, the Patriots recovered and kicked a field goal.

3rd QTR: Justin Herron – Herron committed a holding penalty on a 33-yard pass from Jones to Kendrick Bourne, which would have taken the Patriots from their own 35 down to the Miami 32.  The Patriots ended up getting down to the Miami 24 and kicking a field goal, but that play definitely killed their momentum and negated a big pass play.

3rd QTR: Shaq Mason – Called for an illegal blindside block on a pass play again from Jones to Bourne, who made some good moves to pick up 17-yards that would have gotten New England out to their own 45-yard line.  Again, the Patriots managed to overcome it and put themselves in position for a field goal, but it didn’t need to be as difficult as it was.

Overall, those miscues erased 63 potential offensive yards, which on a day they were starting a rookie quarterback certainly didn’t help them.

That, coupled with Harris’ turnover, spoiled what should have been a better outcome, leaving the Patriots on the disappointing end of a loss that could have put them atop the AFC East.

Not the Performance We Were Hoping For By the Patriots Defense:

5) New England’s defense struggled on Sunday, failing to come up with a big stop in key moments.  While the stat sheet reflects a different scenario (the Dolphins were just 4-of-11 on third down), it doesn’t change the fact that there were quite a few moments in this game where they needed to get off the field and gave up a key play that allowed Miami to get points.

In a contest where the Patriots ended up asking their new signal-caller to have to match what the Dolphins were doing drive-for-drive, that certainly wasn’t ideal.

Matt Judon and Josh Uche were two of the highlights in this one, with Uche coming up with a huge sack at the end of the first half where he barreled through and completely dropped Dolphins left tackle Liam Eichenberg.

That was a terrific play, but there weren’t enough of them on a day where a stop here or there could have been the difference.

The group as a whole looked slow, with Miami getting their players out in space while New England gave chase.  The biggest surprise was how slow Dont’a Hightower looked, especially given how athletic he’s always been in this defense.  This contest put him in the spotlight as a player to keep an eye on in the coming weeks, and unfortunately not for the right reasons.

We’ll see how things go in the coming weeks, but it’s safe to say that this group definitely has some work to do.