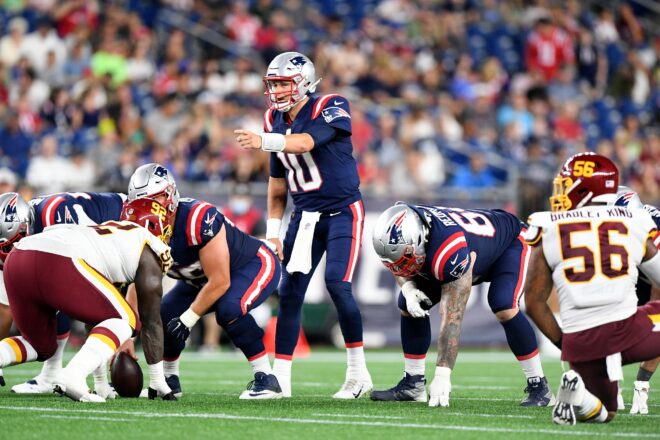 Football was back in Foxboro on Thursday night and with fans in attendance for the first time since the 2019 season ended with a loss to Tennessee. Both the Patriots and the Washington football teams were more interested in getting their players into certain situational football scenarios than the score, which is why as has been said many times, while the games don’t count, they certainly matter.

But for those keeping score at home, the final was New England 22, Washington 13.

With a lot of new faces in 2021, the Patriots played their starters for a few series and then started sprinkling in their backups, while getting them some meaningful snaps.

Overall, it was a good but not great night for the team, which is about what one would expect at this early juncture in the preseason after only about a dozen practices. But while the results were expected in some areas, they were quite unexpected in others.

So here are our takeaways from the opening preseason against Washington:

The Running Back Position Is Loaded:

We’ve been singing their praises all spring and early summer but if there was one major takeaway on Thursday night is that how in the heck will Bill Belichick and the coaching staff NOT keep all of these guys.

The projected 1-2 punch of Damien Harris and Sony Michel looked strong, physical, and explosive. Both came into camp healthy and it shows. Michel (6 attempts for 26 yards) looked very good and was carrying tacklers for extra yardage. The same can be said for Harris (4 rushes for 17 yards). James White looked like his vintage self catching two passes for 22 yards in limited reps, but it was an area that both he and Cam Newton struggled to find consistency in 2020.

That’s when the young guys took over. J.J. Taylor, the diminutive, but exciting 2nd year running back who is called “Little Dion” by RB Coach Ivan Fears in reference to former Patriots running back Dion Lewis, had two carries for 10 yards and caught five passes for 31 more, he was the team’s second-leading receiver on the night. Every time he touches the ball, you can hear the crowd buzz.

Rookie Rhamondre Stevenson had to wait until the 4th quarter to see the field, but did he make a splash, albeit after the starters were long gone? You bet. After a Joejuan Williams interception set the team up, Stevenson hammered the ball on several plays, ending up in the end zone for the touchdown.  And after Washington nearly tied the game with a minute plus left in the game, Stevenson blew around the right side and galloped 91 yards for his second touchdown showing incredible speed for a big man. He finished with 10 carries for 127 yards and two TDs.

Cam Newton started the game and the first series nearly ended in disaster. On a 3rd and 8, Chase Young blew right past Isaiah Wynn and blasted Newton as he was letting go of the ball. It was ruled an incomplete pass, so the Patriots escaped a bad situation and were forced to punt.

He led a much nicer second drive that took them down inside the red zone. But a holding penalty put them in a 1st and 20 and like last season, it put the team in a bad situation. The offense (right now) is still one that has to play from favorable down and distance situations. The team kicked a field goal. Newton finished 4-7 for 49 yards.

Mac Jones played the 2nd and 3rd quarters and came as advertised. He showed a nice grasp of the offense, processed the plays quickly, and mostly checked down to his backs, taking what the defense was giving him.

His best pass was an incompletion, a 34-yarder down the left sideline that he dropped right in the bucket to Kristian Wilkerson that was dropped/knocked away in the end zone. Bill Belichick had him run the hurry up/2 minute offense to begin the third quarter throwing some situations at the rookie, and he looked smooth and in control. Jones finished 13-19 for 87 yards. Brian Hoyer mopped up in the 4th quarter.

Overall it was a good but not great night for the QBs, but the team has to feel good about the progress each has made. Am I on board with the now rising tide of people saying that Jones now has the inside track of starting against Miami? No. 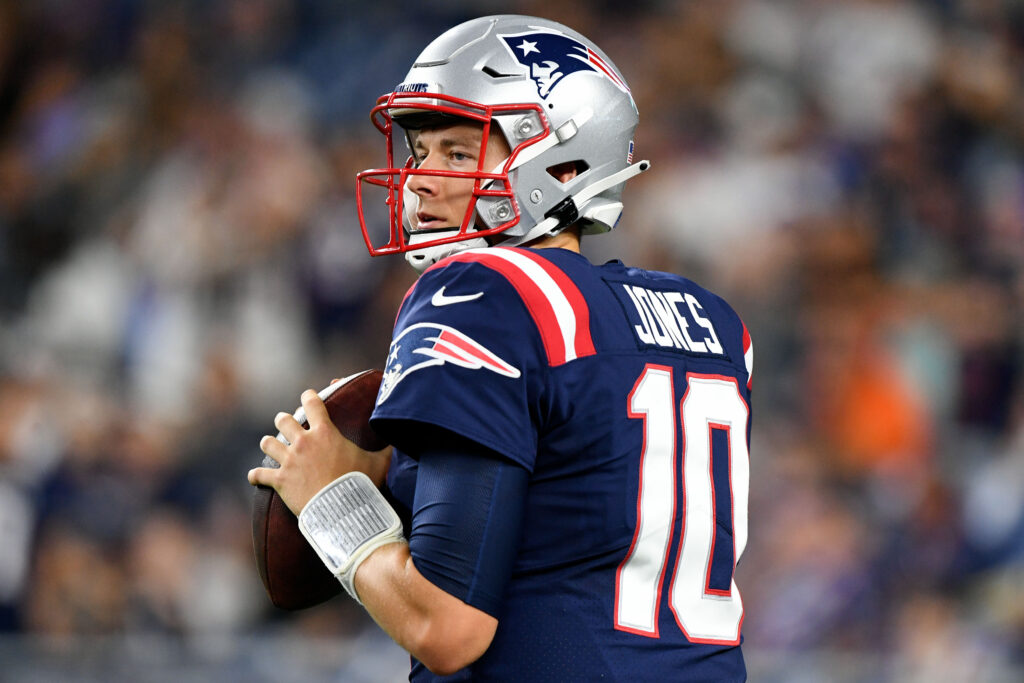 Special Teams (Not the Kickers) Lays an Egg:

For a team that prides itself on Special Teams and practices so much time on them, they were not sharp, with the exception of the kickers in the opener. Three false starts on the punting team with another penalty on the kick return game, with leaky coverage in both punt and kick returns…That is guaranteed to get the ire of Belichick in a few hours when the team goes over the film tomorrow.

Was it because long-time snapper Joe Cardona is out with an injury and with Brian Khoury having just been signed a few days ago? It could explain the mess up with the timing, but they’ll hear it anyway.

However, I think it is fair to say that is now a legitimate kicking competition between Nick Folk and UDFA Quinn Nordin. The rookie from Michigan has been making the most of his opportunities with Folk out with an injury and in his first game action, he was 3-3 for field goals with his 50-yarder going halfway up the net. That’s how strong his leg is. He did miss an extra point but nailed his last one to end the night on a high note. Jake Bailey was his typical self, booming self averaging 54 yards per punt on five punts including a 65-yarder.

All of New England held their collective breath for a few moments when Judon was cut low on a running play, stayed down on the field. But after a few moments in the medical tent, he returned to the sideline and seemed just fine.

However, with limited snaps, Judon and the starting linebacking corps look much stronger than a year ago and should be a force to be reckoned with. Right away, Judon made his presence felt. On a third and short situation, he shot in from the opposite side and tackled RB Peyton Barber for a loss. He also pressured QB Ryan Fitzpatrick a couple of times.

Josh Uche continued his strong play flying all over the field at both inside and outside linebacker tonight. With Dont’a Hightower and Kyle Van Noy back, this group looks strong. Harvey Langi had a rough night, he looked like a liability in coverage and missed a tackle in the open field.

Newcomers on the DL Have Solid Outings:

Davon Godchaux showed the type of presence that the team was looking for from him, making three tackles in limited action as the defensive line looks a lot better in the run defense. Henry Anderson played into the second half and looked solid as well. Rookie Ronnie Perkins had a mixed night, creating some good pressure on the QB on some plays, but got caught overrunning the play on others.

The team was getting a good push from the interior line, Perkins and Anderson as mention above brought pressure but Tashawn Bower and Carl Davis were disruptive and each logged a sack.

Secondary Play Was a Mixed Bag:

Washington’s QBs (Fitzpatrick, Taylor Heinicke, and Steven Montez) were definitely spreading the ball around…Seventeen (17) different receivers caught passes for Washington. While there were some good plays in the secondary, including embattled Joejuan Williams coming up with a pick from being in the right place at the right time, it would a stretch to say that the secondary play was what was expected.

The WFT has a number of good receivers but there were too many times that their receivers were getting open, especially down the seams. Washington loves throwing to their backs and they were a handful all game. So there is room for improvement there. J.C. Jackson was good but without Stephon Gilmore, who is still on PUP,  their depth is not as strong. Kyle Dugger was a bit of a disappointment to me in this one, perhaps I am being too harsh, I’ll have to rewatch the tape.

Myles Bryant and Malik Gant (after just being signed a few days ago), looked good at safety. Bryant took a shot to his shoulder/back but should be fine. 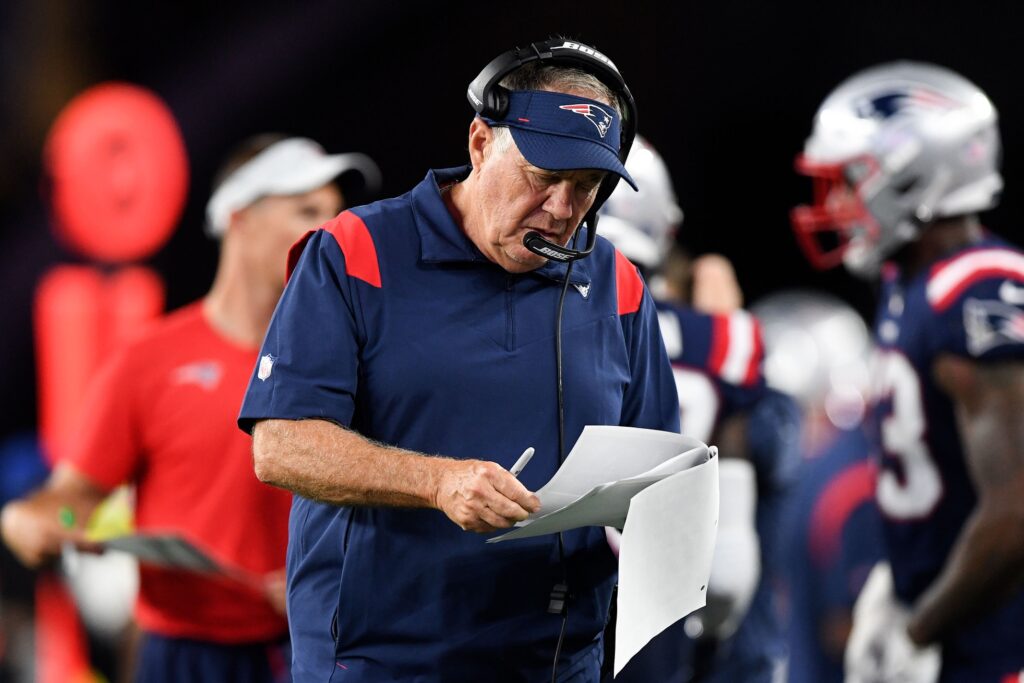 Bill Belichick won’t be happy with most of his ST’s play on Thursday. (Brian Fluharty-USA TODAY Sports)

With Nelson Agholor sidelined with an injury, Jakobi Meyers, Kendrick Bourne, and N’Keal Harry each only logged one catch…although in Meyers’ situation one incompletion should have been ruled a catch. He and Bourne were only targeted twice and Harry was only targeted once after playing nearly the entire first half, although he did block extremely well during the game.

Kristian Wilkerson was targeted nine times and caught six passes for 39 yards. Isaiah Zuber caught one pass for nine yards after being targeted three times with a drop. Gunner Olszewski was targeted once, a deep ball from Jones that was juuuuust a bit too long.

Jonnu Smith had a single catch for 16 yards but no other TEs were targeted. Which was a disappointment.

Now the team will get back to work and prepare for joint practices with the Eagles.

Very concern on the WR front. I know that Agholor was not there but no one even came close to showing me he a #2 Guy. With no playmakers on this team it going to be very easy to defend.