1 year ago at 11:01 am ET
Follow @IanLogue
Posted Under: Patriots News 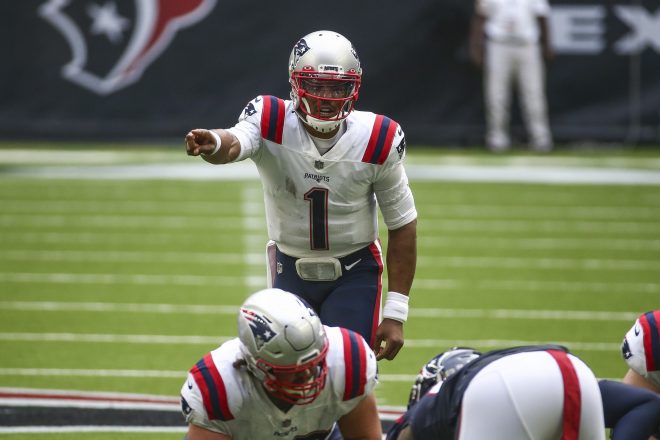 1) While looking over some numbers for Cam Newton from last season, one thing that stood out was the fact that in the month that Bill Belichick touts as an important one, December wasn’t exactly a good span for the veteran QB.

His completion percentage during the month December was his lowest of the season, with Newton finishing just below 60% passing at 59.7%.  During those four games he was 43-of-72 for 431-yards with one TD and one interception.

September, October, and November was a different story.  Newton completed 68.1% in 3 games for September, and 65% in 2 games in October.  October was rough for Newton from a turnover standpoint, with the veteran throwing 5 interceptions and zero touchdowns.

But it was interesting to see how badly December went for Newton compared to the other months and the result certainly makes sense.  The Patriots went 1-4 over that span, which obviously eliminated them from postseason contention. They won the finale (a January game) but by then, the damage was done and their season was over.

The stretch run has always been key for the Patriots, but the last two years haven’t been great.  The season ended on December 29th in 2019 and New England finished Tom Brady’s final season by going 2-3 over the final stretch.  That cost them a bye and set up a disappointing loss to Tennessee at home in the Wild Card round.

One thing that did stand out was the fact that Newton was definitely a better finisher in games.  He had a completion percentage of 69.4% in the second half compared to just 62.1% in the first half, with the third quarter seeing him finish completing 71.9% of his throws.  He completed 67% in the fourth quarter.

Either way, it’s something to keep an eye on.  For the Patriots to get back to becoming a championship team, they’ll need to win in December to get there and they’ll need Newton – if he’s still the starter by then – to hopefully be better this time around.

2) It looks like the league changed the preseason schedule for a variety of teams, which includes one change affecting the Patriots.

What’s a little crazy is that the league appears to have an error internally in their system which is showing all the games beginning at noon in Weeks 1-3, which would be an odd time to air preseason games on a Thursday.

But for now, this at least gets the end time over with a little sooner, allowing the Patriots to get back into Foxboro 90-minutes sooner leading up to their Week 1 game against the Dolphins.

3) One interesting story is going on down in Tampa Bay where undrafted free agent rookie Cameron Kinley, who is enlisted at the Naval Academy, was apparently denied being able to delay his service and play in the NFL.

Kinley participated in the club’s recent minicamp but put out a statement, citing a policy made by Donald Trump in 2019 titled “Directive-type Memorandum – Military Service Academy Graduates Seeking to Participate in Professional Sports” which allowed academy graduates to pursue professional sports opportunities.

The rookie cited other examples of players who benefitted from Trump’s policy, including Elijah Riley of the Eagles, along with Malcolm Perry down in Miami.  He also cited four other players in a similar situation who were not denied the opportunity to participate in the NFL.  Kinley wrote, “it puzzles me as to why I am the only person to be denied this opportunity.”

We’ve seen a similar situation play out here locally.  Joe Cardona, who was an officer in the US Navy when he joined the team back in 2015, faced an uncertain future in 2016 when there was a chance he wouldn’t be able to play that year.  He went through a similar situation in 2018.

There’s no question it’s disappointing but even if he’s forced to miss time in the league, it definitely doesn’t take away from the value he brings from his service to our country.  Needless to say, best wishes to Kinley as he navigates through it.

4) One thing that should be interesting to watch this season is what happens down in Pittsburgh with Steelers QB, Ben Roethlisberger.

Roethlisberger struggled down the stretch in 2020, coming off an offseason where he had major surgery on his right elbow.

Ed Bouchette of the Athletic writes that the veteran had three flexor tendons that tore off the bone in his elbow in 2019 reattached heading into last season.  He played in every game and got them off to a 9-0 start, but they fell apart down the stretch and were knocked out by the Browns in the Wild Card Round.

Roethlisberger admitted last week that unlike last offseason, he’s been resting his arm more and he’s hoping it helps him in 2021.

“Last year, I threw thousands of balls in the offseason because we were rehabbing,” said Roethlisberger. “This year, it has gone back to the normal routine of throwing here, doing a little bit at home with the trainer. But mostly taking time off. I took a lot of time off from throwing so I hope and think and really believe it will pay dividends this year.”

At 39-years old, he faces an uphill battle.  He hasn’t exactly taken care of himself and has already contemplated retirement.  As a result, if ever there was a season for him to hit “the cliff”, this might be it and that could be bad news for a Steelers team who may be looking for a new starting quarterback next offseason.

5) With the saga continuing in Green Bay, Mike Sando of the Athletic writes that the numbers were working against Aaron Rodgers from the start when it came to the Packers using a first-round pick on Jordan Love.

While Green Bay has downplayed the decision from the beginning, that appeared to be the beginning of the end and as Sando points out, for the club to have tried to spin the decision in the ways they have has become “laughable” and it shouldn’t be a surprise that Rodgers skipped the club’s mandatory minicamp this week.

Sando cites that from 2005 (the year Rodgers was drafted) through 2020, NFL teams chose 45 quarterbacks in the first round, with those QBs becoming the team’s full-time starters within two seasons in 43-of-45 cases.  Paxton Lynch was one of the exceptions, with Love being the other up to this point.

Green Bay essentially made the same miscalculation about Rodgers that New England did with Tom Brady, but at least the Patriots didn’t use a first-round pick when they took Jimmy Garoppolo in 2014.  Garoppolo was a 2nd round pick taken at 62 overall, and unlike the Packers, it didn’t cost New England a potential impact player in the first round.

As a result, Green Bay put themselves in this position and the question now is simply whether or not they can wiggle themselves out of this mess.  Sando writes that team president Mark Murphy isn’t helping the situation, having published comments recently “suggesting the Rodgers situation was dividing the fan base.”

That’s probably true, given that they’re also probably tired of the drama.  But feeding into it isn’t helping things.

For now, it remains a complicated problem without a sign of a solution, which is only going to keep dragging things out and that’s bad for both the team and the fans who support it.