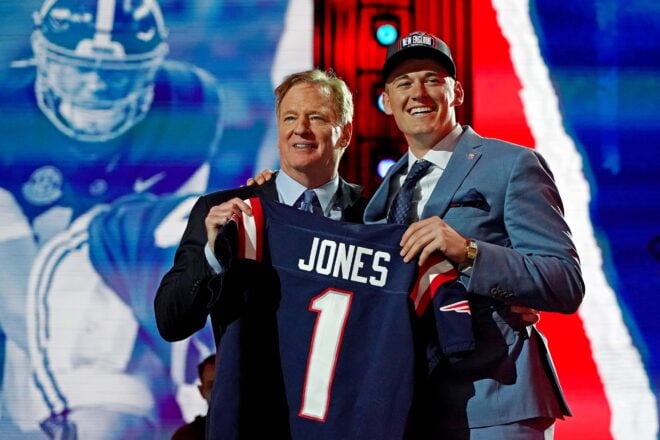 Thursday night’s first round of the NFL Draft certainly had its moments, but at the end of the day, the Patriots managed to come away with a quarterback to hopefully help get them back to a championship level in the coming years.

After watching things unfold a little differently than most people expected Thursday night, the Patriots watched Alabama quarterback standout Mac Jones fall into their lap with the 15th overall selection, allowing New England to get their man without having to move up the board to go get him.

One of the first dominoes that fell, which allowed that scenario to play out, was the fact that San Francisco shocked everyone by not taking Jones and instead selecting Trey Lance, which immediately changed everything.

From the time the 49ers jumped up to the #3 overall spot, all indications were that Jones was their guy.  He’s been the pick in most mock drafts, with quite a few NFL insiders believing that he was the player they wanted.  However, that verdict appeared to be split internally, with Jones having reportedly been the player that head coach Kyle Shanahan wanted, yet other reports indicated that the 49ers front office instead favored Lance.

When the team was on the clock Thursday night, the choice ended up being Lance, leaving Shanahan having to watch the guy he supposedly liked fall to New England.  If history is any indication, somewhere deep down he’s probably crossing his fingers that it’s Lance and not Jones who turns into the player the 49ers seem to believe he can be.

As for Jones, the 6’3″ quarterback had previously had conversations with the Patriots back in January that he said went well, saying at the time that the team was “really cool” and “asked some really good questions.”

The Patriots must have liked the answers, because he’s got the opportunity to potentially be the leader of their team in the coming years.

Jones’ resume is impressive. This past season he led Alabama to an undefeated finish, which culminated with a National Championship.  Along the way, he finished the year with an incredible 77.7% completion percentage, which set an NCAA record.  He’s incredibly poised and accurate and there have even been comparisons made to former Patriots QB Tom Brady, who Jones has admitted that he’s modeled his play after.

With big shoes to fill, he’s got the work ethic and the attitude that certainly seems to fit what Bill Belichick normally looks for in a player.  Considering that the Patriots opted to target him in the first round, it’s clear that New England holds him in high regard.  He’s the first QB taken in round one during Belichick’s entire coaching tenure with the club, which clearly shows the urgency they felt to hopefully solidify the vacancy left after Brady’s departure.

As for Jones, it’s the opportunity of a lifetime.  He has the luxury of being coached by the best coach in the league as well as by one of the best offensive minds in football in offensive coordinator Josh McDaniels, which should definitely set him up for success.

Jones is already used to winning and under Alabama head coach Nick Saban, so he’s no stranger to hard work.  Thursday night after they called his name, Jones was all business after he got the call, already seemingly getting himself ready for the next step.  He headed toward the stage with a look of focus and determination, already getting his game face on knowing that the real work begins in the weeks ahead.

When he eventually spoke with reporters, Jones said that the Patriots were where he was hoping he’d end up all along.  For someone who is used to winning and the fact he’ll now be playing for a coach like Belichick, it’s safe to say that this match appears to be a perfect fit.