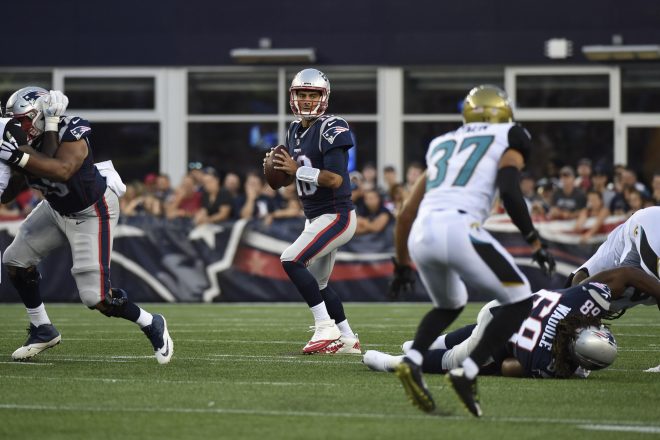 Things can definitely change pretty quickly, and the outlook heading into tonight certainly looks quite different now that Jimmy Garoppolo’s potential return may be on the table.

While some may seem to be split on this, Garoppolo coming back to the Patriots would be an absolute game-changer for the 2021 season.  It’s not ideal, but it sort of comes back to one of the strategies we’ve seen with Bill Belichick over the years and that’s to target the known over the unknown when it truly counts.

That’s been the approach – for the most part – at the skill positions, specifically at receiver where Belichick changed his strategy and started acquiring guys like Wes Welker, Randy Moss and Chris Hogan, who were all established players on the rise when New England pounced and added them.

That same mindset does make sense when it comes to quarterbacks.  For anyone who has followed the NFL Draft closely over the past two decades, first-round quarterbacks are such a risk and it’s so difficult to invest time developing – and paying – the high cost associated with those guys when the vast majority of them don’t work out.

Take a snapshot of tonight and set it aside and pull it back out in a few years.  You’ll likely have one standout, a couple of mid-tier guys, and another who may be starting his journey to various teams after fizzling out with whoever takes him tonight.  That’s not an opinion, that’s just what’s happened historically.

Look at the 2018 draft.  We saw Baker Mayfield get taken with the first overall pick, followed by Sam Darnold (#3), Josh Allen (#7) and Josh Rosen (#10).  Mayfield and Allen each took some time to get to the next level, while Darnold is already out and Rosen’s future remains uncertain.  Lamar Jackson ended up being the biggest surprise at #32 overall for the Ravens, but you can see looking at each of these names that there aren’t any guarantees when it comes to taking one of these guys in the first-round.

That’s likely why we’ve seen the Patriots mostly target guys from the 2nd round forward, although having someone like Tom Brady certainly made that need a little less important.  But given what’s at stake in a relatively short window, acquiring a known commodity who Belichick and Josh McDaniels are both comfortable with is really the more logical choice.

Granted, the concern is there about Garoppolo’s injury history, but hindsight being what it is, they’ll likely be vigilant about getting the ball out of his hands and protecting him.  This is an incredibly dynamic and prolific group of offensive players he’ll have at his disposal and it’s safe to say he’s probably self-aware of his reputation and should be motivated enough to prove his critics wrong.

For the 49ers, it makes too much sense to not get it done.  Shanahan has tried to be clever and Belichick-like in his responses recently (and not very well) but he knows that this is his best shot to move him, because no one values Garoppolo more than Belichick.  So if Shanahan is really ready to turn the page, now is when it needs to happen.  Waiting will just lead to a much lower return from another team who will likely have the same doubts that Shanahan does.

For Garoppolo, this is his chance to go to a team where he’ll instantly be in a position to start.  We’ve already seen what he’s been able to do with a smart offensive mind and a talented roster.  Doing the same here, along with coaches who won’t fall apart in critical moments, might be just what he needs to finally put him on the right track.

That’s not to say that New England selecting someone in the later rounds doesn’t make sense, but acquiring Garoppolo opens things up for the Patriots to focus on more important things, like grabbing a top-tier defensive back like Jaycee Horn, who could become a critical pick depending on how things play out with Stephon Gilmore and J.C. Jackson.  It also allows them more draft currency to pick their spots in the later rounds and stockpile talent, instead of potentially having to give quite a bit away to move up into the top 10.

Some will make the argument that Cam Newton should be better this season after a full year with the club and that the Patriots don’t need Garoppolo to make another run.  While we all hope that’s the case, we’ve also seen enough to wonder if by week 10 we’ll again be pondering whether it may be time for the team to potentially sit him down in favor of Jarrett Stidham, or whoever else they may select this weekend.

Either way, should the rumors play out and Garoppolo returns, it will completely change the complexion of this draft.  But more importantly, with a team this stacked and a player who knows and can execute this system the way they need him to, the outlook on the 2021 season and even the next few seasons suddenly looks significantly different than it did just one day ago.