2 years ago at 8:41 am ET
Follow @IanLogue
Posted Under: Patriots News

Some Patriots news and NFL notes for this morning:

1) The number of teams who could get into New England’s way heading into the draft appears to be growing, with a couple of additional teams now potentially in the mix to take a QB off the board.

One such team is the Chicago Bears, who some reports are indicating could jump into the fray. Pro Football Network reports that with the Cowboys looking to possibly trade down, the Bears could be the team to make a move up the board to take a quarterback.

Dallas currently sits at #10 overall, with Denver right behind them at #9 and Carolina ahead of them at #8. Both Atlanta (#4) and Cincinnati (#5) appear to be possible beneficiaries as teams could jockey for position ahead of the other to get their guy. The Broncos are now also rumored as a club that could select a QB, adding one more potential team into the mix.

However, Carolina, who recently acquired Sam Darnold this offseason, could also go the other way and stockpile picks in an effort to move back and try and surround Darnold with talent. Detroit, who sits ahead of them at #7, has also come up in reports recently as a possible trade partner for the Patriots but it remains to be seen whether or not Bill Belichick feels strongly enough about any of the players on the board to move up eight slots to make that deal.

The problem is, he may not have a choice. If the Bears suddenly decide to get into it, or Washington too for that matter, it only muddies the water further, especially if either any of those teams make a deal with Atlanta or Cincinnati.

It’s amazing how much the outlook has changed in only a month and how teams are suddenly beginning to show their desperation. That likely means we could see another move (and possibly others) coming before all is said and done, which might be bad news for a Patriots team looking to upgrade the one remaining piece of what’s an otherwise pretty talented roster heading into 2021.

2) Meanwhile, speaking of the Bears, the retirement of Julian Edelman has them all fired up out there as people start talking about whether or not Edelman should be under consideration to end up in Canton.

Given that discussion, one player who they bring up as a comparison is former Bears receiver Marty Booker, who former QB Jim Miller had high praise for, given their time together.

Miller appeared recently on Chicago Sports 670 the Score “Bears All Access” podcast and talked about Booker, who he felt was just a terrific player.

“Marty was a terrific receiver,” said Miller. “He was absolutely fearless going over the middle, had big-play potential all around him. He shed a little weight and got even faster, but Marty was a terrific athlete. I don’t think people realize, he could throw a football like 80-yards, just a really laid-back guy but worked extremely hard. He has that southern laid-back attitude but once he put that helmet on, he turned into Superman out there.”

Booker finished his career with comparable stats to Edelman and was a similar scrappy-type of player.

However, the argument can be made that Edelman’s ability to make plays in pressure situations is really the trait that made him so terrific, with the now-former Patriots receiver finishing 2nd all-time in postseason receptions behind only Jerry Rice.

Adam Schefter even said after Edelman was named Super Bowl MVP two years ago that he deserved consideration.

As the MVP of this year’s Super Bowl, Patriots’ WR Julian Edelman is playing himself into a spot in Canton in the Pro Football Hall of Fame.

It’s a debate that will continue but it’s interesting hearing about players like Booker who, like Edelman, was an underdog that fans still hold plenty of affection for out there.

3) One other discussion in that same podcast was the fact that like the AFC East, the AFC North is suddenly becoming another competitive division.

The Steelers, Ravens and Browns each finished one game apart last season, with Pittsburgh finishing 12-4, while both Baltimore and Cleveland finished 11-5. Following Joe Burrow’s knee injury, the Bengals fell apart and finished 4-11.

The big question now is whether or not the Bengals added enough in free agency around Burrow to hopefully get them back into contention. They added veteran tackle Riley Reiff to bolster their offensive line, and on the other side, they signed defensive tackle Larry Ogunjobi, along with defensive backs Mike Hilton and Chidobe Awuzie to improve their secondary. However, Miller wonders whether or not that’s enough and if it will allow Cincinnati to potentially jump into contention.

“Look at Cincinnati this year,” said Miller. “They’ve been active in free agency, but is there enough around Joe Burrow that they’re still not going to finish fourth in their division in the AFC North? I mean with Baltimore, Pittsburgh and now the emergence of Cleveland? If they get to 8-8, you would think Cincinnati is making strides because there are bad teams that need to put a lot of good pieces around their young quarterbacks in order to build them. Unfortunately, that wasn’t in place last year and Joe Burrow got hurt and didn’t finish the season.”

4) One other name that also came up in that podcast was former Houston quarterback, David Carr, who was an example of a player who the team put high expectations on but many believed didn’t surround him with enough talent.

The former Fresno State standout spent five seasons in Houston but ended up beaten and battered and never went on to become what they hoped he would be.

Tom Thayer, who also appeared on the Bears podcast with Miller, talked about the fact that there’s a parallel because there will likely be a player (or more) who could fall into a similar situation if teams don’t take the steps to make sure their QB can be successful.

“The first player they picked was Tony Boselli in the expansion draft, and then they never drafted an offensive lineman above the third round when he was there with Houston,” said Thayer. “So you’re exactly right, they never surrounded [Carr] with the protection that he needed in order to add the competitiveness at the quarterback position, or be safely protected, or be able to be an asset to have better opportunities to distribute the ball.”

But Miller disagreed and put some of the blame back on Carr, saying that he’s watched film and Carr’s indecisiveness was a bigger problem than people might have realized.

“I thought it was a little bit of both because I remember watching tape on David Carr for Houston, for me, he struggled going through his reads,” said Miller. “A lot of times he would get from 1 to 2, he locked on his receivers, then he’d be getting sacked, the ball wouldn’t be getting out of his hands, so I think there was a little bit of both going on where the offensive line was getting thrown under the bus for the Houston Texans when some of that was on the quarterback as well, who didn’t develop and mature over time. Maybe he got shell-shocked, I don’t know.” 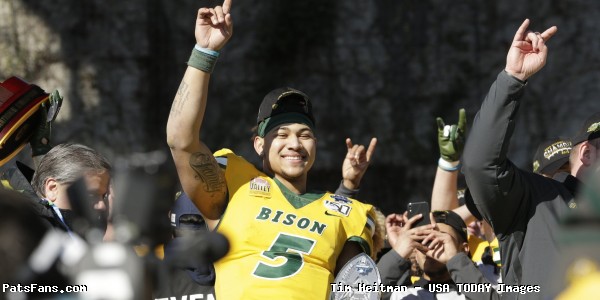 There are concerns about Lance heading into the draft.

5a) Meanwhile, another name that has come up is quarterback Trey Lance, who some believe the Patriots might target. The team will reportedly be present for Lance’s workout Monday.

NFL analyst Matt Bowen also appeared on the podcast and talked about Lance, who he feels had limited experience and hasn’t been battle-tested because his team never really faced adversity. But Bowen explained that in situations like these, you have to project and bet on the physical traits as there were similar concerns about Justin Herbert before last season and he’s turned out to be a talented player so far.

“One thing I wrote in there was limited game reps vs FCS-level competition, didn’t see consistent NFL situations, whether it’s the pocket he’s throwing from or specific game situations,” said Bowen. “I think with someone like Trey Lance, you have to really project the traits and draft the traits, and bet on those traits.”

“This is not as similar, but I made this mistake last year with Justin Herbert. As I watched the film, and I had some concerns in the film, I had concerns about the offensive structure in Oregon, would it translate to the NFL?”

“But in terms of the traits, Justin Herbert, the physical tools, the physical traits, the arm talent, the ability to move and now you put him in a schemed-up pro offense, and you saw what happened during his rookie season. So I think with Trey Lance, maybe not an immediate starter in his rookie season, but again, you’re projecting out and saying, ‘O.K., if we take this player who has the high-level traits, and put him in our system and develop him, then we have a future starter that can win a lot of games for us.'”

With the Patriots potentially having to turn the page and look at Day two prospects, Bowen likes Davis Mills and feels he’s someone teams should look at. The only issue is, he also believes that if the Bears are also forced to wait until Day two to target someone, that’s who he believes would be a good fit in their offense.

As a result, keep an eye on Chicago because they’re clearly yet another team who could complicate things for the Patriots heading into the draft.

5b) One other thing to note, staying with day two picks, while we’ve been keeping an eye on who the Patriots have been actively scouting or showing interest in, history has sort of shown that their affinity for a player isn’t always obvious.

Ben Volin of the Boston Globe pointed out on Sunday that prior to drafting Jimmy Garoppolo, the Patriots sent a scout who was present but showed little interest and even left before the workout was over.

Volin spoke to Garoppolo’s former coach, Dino Babers, who was the head coach at Eastern Illinois and he recently talked about that encounter. Babers said at the time, because of how that day played out, he had no idea the Patriots were even really interested.

“They came to one practice — one guy came — he stayed for half the practice, he waved at me when he was leaving, and I never heard from him again,” Babers said. “I guess he saw what he needed to see in the first half of practice. I’m sure they did a lot more, because obviously, they got it right.”

Garoppolo did later visit with the team as one of the 30 players that offseason, but it’s yet another reminder that no one really knows what Belichick is really thinking. Hopefully, they’ll get it right this time as well.