2 years ago at 10:13 am ET
Follow @IanLogue
Posted Under: Patriots News

1) According to the NFL’s Albert Breer, the Patriots are among just two teams who have committed to being in Columbus so far for Ohio State’s workout this week, with the 49ers being the other club.

The two teams will be on hand to take a look at Justin Fields, who remains among the top QB prospects heading into the draft.

Breer reports that he believes Josh McDaniels will be leading the group that will be present for the Patriots (teams are only allowed a maximum of three people), while GM John Lynch and Kyle Shanahan are both expected to be there for the 49ers.

San Francisco is rumored to be favoring Mac Jones as their pick at #3 overall, but they’ve continued scouting all available prospects and there are some who believe the selection of Jones could change.

Meanwhile, some reports have indicated the Patriots are interested in moving up but so far, they’ve yet to show any serious signs of tipping their hand.

2) One of the more surprising bits of news involves former Titans and Rams head coach Jeff Fisher, who after being out of the coaching ranks is apparently taking a college job with Tennessee State.

Fisher will reportedly be joining former NFL great Eddie George, who is beginning his coaching career as the head coach at the university and has decided to bring on Fisher in an advisory role.

The former NFL coach spent 17 years with the Titans and was fired in 2010, but was later hired by the St Louis Rams in 2012 and was exposed as a badly unprepared coach in 2016 when it was revealed he clearly hadn’t scouted the Patriots after mentioning two players who hadn’t been with the team for several seasons.

The worst part about that exchange is it happened on a Wednesday, which by then is typically when game plans are in place.  That means his defense obviously didn’t have the information on the guys they were facing, which explains the Rams’ lack of success during the remainder of his tenure.

If you follow Bill Belichick’s press conference during the seasons, Belichick will typically mention quite a few players by name and their roles, including some of the most obscure guys who may not normally get a lot of attention.  That’s the difference between someone like Belichick and Fisher, who after that revelation was clearly just going through the motions and needed to be fired.  The Rams did just that, with Fisher being let go prior to the end of the season.

Fisher is a career .500 coach, having finished with an overall record of 173-165-1 during his time as an NFL head coach.

In the meantime, best wishes to George, who was fun to watch as a player and it should be interesting to see how he does in his new role.  Hopefully, he’s a little more prepared each week than his former coach was. 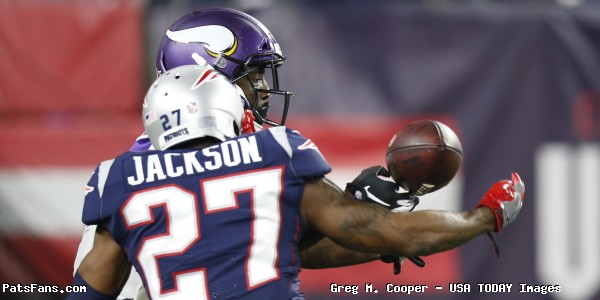 Jackson has had a great start to his NFL career.

3) J.C. Jackson may be venting a bit when it comes to his current contract status, which has him as a restricted free agent who is sitting with the second-round tender that was placed on him for the upcoming season worth $3.384 million.

The 25-year old posted an Instagram story over the weekend that read, “GOTTA FEED THE FAM this bigger than ME!!”, obviously referring to his current situation.  So far, that tender hasn’t attracted any offers from potential suitors, which if Jackson was to sign an offer sheet that the Patriots refused to match, they would receive a second-round pick in return.

The former undrafted free agent finished last season at the top of the league after amassing 9 interceptions, which was miles ahead of anyone on the Patriots (Devin McCourty, Adrian Phillips and Jonathan Jones each had 2, while Stephon Gilmore, Chase Winovich and Myles Bryant each had 1) and it was second in the NFL behind only Miami’s Xavian Howard, who finished with 10.

Jackson also had 14 passes defended, which was tied for the 5th highest total in the league.  He also had two fumble recoveries.

Locking up Jackson will hopefully need to be a priority at some point.  The Patriots came out of 2020 with Stephon Gilmore’s future in question as he heads into the final year of his contract, while Jason McCourty appears to potentially on the verge of moving on in free agency after recently receiving interest from the Giants.

Losing both Gilmore and Jackson after this season would certainly deal a massive blow to their secondary, so figuring out a way to at least keep a young player like Jackson would be preferable, especially considering he also picked off 5 passes in 2019.  By placing a second-round tender on him, the club may have been hoping for another team to set the market for him but so far, that hasn’t played out.

We’ll see if someone steps forward at some point but for now, Jackson will just have to remain patient and continue working hard toward what will hopefully be a productive 2021 season.

4) Peter King pointed out in his Monday column that if the Jets take Zach Wilson at number two, he’ll be the sixth quarterback picked by the club in the top two rounds over the last 15 years.

Wilson, should he be New York’s pick at two, will be the sixth quarterback picked by the Jets in the top two rounds in the last 15 years. (Kellen Clemens, Geno Smith, Christian Hackenberg were picked in the second round; Mark Sanchez and Sam Darnold in the first.) Average length of stay on the Jets by the previous five passers: 3.6 seasons. So Wilson will be battling a dim quarterback heritage, as well as trying to lead a talent-deficient offensive roster. It helps that the Jets have the healthiest draft situation in the next two years, with five picks in the top 100 of the next two drafts, including two first-rounders each year.

It’s a sobering reminder that as much as we hope the Patriots will get it right, the chances of missing even in the top rounds is still a distinct possibility, even with multiple attempts.  Granted, the Jets tend to screw it up more than most, but anyone who has followed the draft in the last 20-years knows that even New England has made mistakes.  Hopefully, this year will be an anomaly given what’s at stake.

5) As for who the Patriots will potentially select at quarterback in the coming weeks, that remains the biggest mystery but The Athletic’s Jeff Howe had some interesting data on how it all might play out.

The site ran 100 mock-draft simulations through Pro Football Network and after analyzing the data, Howe looked at the likelihood for each of the available players to be available at each of New England’s selections.

Ruled out completely were Trevor Lawrence and Zach Wilson, as well as Justin Fields.  Trey Lance was given a 2% chance and from there is where it got a little interesting.

Jones remains the biggest question mark, with his average draft position now sitting at 13.67 given the rumored interest by the 49ers, which could be skewing that total after they’ve traded up to #3 overall.  Jones’ highest draft slot was #3 with San Francisco, while his lowest selection was 42.  He’s listed as having a 33% shot of being there if the Patriots remain at #15.

Notable names of guys who could potentially be there after round one at #46 included Davis Mills (100%), Kellen Mond (100%) and Kyle Trask (100%), so it’s possible they could be options if the Patriots decide to go a different route in the first round and try again later on.  But the overall chart is definitely interesting and worth checking out.

The biggest domino will be Jones, who will likely change everything since it could cause other teams to change their plans if his pick frees up one of the other big names.  A lot can still happen between now and the draft, but so far, it’s definitely been one of the most interesting offseasons in Belichick’s tenure.

Quick editorial note: If you enjoy these, please drop a comment below or send me a note at patsfans.com(dot)gmail.com. I definitely appreciate the feedback and thank you to everyone who has been reading them so far this offseason. You can also subscribe below to have them delivered to your inbox each day as well.

I look forward to your Five things to know, I am subscribed. Thanks, Ian.

Thanks, John. I haven’t gotten much feedback since I started doing them and definitely appreciate you taking the time to reach out and comment 😉

I also enjoy your five things to know.

Anybody who can’t take care of their family on a $3.4M contract has serious financial management issues. Also, it should not be overlooked that once Gilmore went down Jackson’s play suffered.

Because he has been tendered there is no contract dispute. Clock is ticking on another teaming upping the ante.

Thanks, Michael. I agree, and while I understand Jackson looking for his payday to hopefully spread some of that to his parents or loved ones, obviously his current tender is nothing to shy away from. So far, no one else has stepped up and tried to make him an offer but I do hope they get something done to keep him around. Talented young CBs are tough to come by and it would definitely be nice for them to lock him up at some point.

Ian, I also look forward to and enjoy reading your 5 Things to Know tidbits. I have also just subscribed.

Thanks, Keith. Really appreciate it and thank you for also taking a moment to drop a comment 🙂