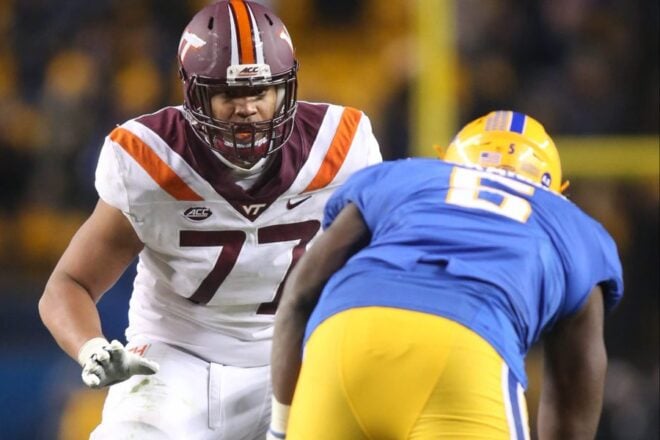 The Patriots are obviously looking for a QB in the early going of the 2021 NFL Draft. However, if they aren’t able to move up to select one of the top five QBs in the draft, they may opt for one of the next tier QBs in the 2nd round or later.

So, what would be their reasoning behind what they plan to do with their top pick. While the possibilities exist (and something they’ve done often enough), for the team to trade later into the first or the top of the 2nd round.

Bill Belichick has traditionally liked to make moves a year early to head off what could a position of larger need a year later. The two biggest positions that could require help in 2022 are not positions of need this year, at least at the present time.

At offensive tackle, rookie Isaiah Wynn’s contract is up to the Patriots. If they choose not to take up his fifth-year option and with Trent Brown on a one-year deal, then what next? Thus, it would seem that it would be prudent to seek help there where there are plenty of talented tackles in the upcoming draft.

Cornerback is another position where it seems they could make an early selection. Rumors continue that the Patriots will trade CB Stephon Gilmore and CB J.C. Jackson has a 2nd round tender offered. It is still possible that he could still be swooped up by a team in the next few weeks. If that were to happen there are also several options for the Patriots to pursue in the draft.

But for the purposes here, we’ll look at tackle for the first selection in the draft.

Christian Darrisaw, Virginia Tech is an explosive, dominant run-blocker and packs a terrific punch as a pass blocker where his game has yet to see his peak. During the 2020 season at VT, he allowed zero sacks, zero hits, and only six hurries all season.

He possesses excellent size and length at 6’5, 315 pounds as well as excellent athleticism and can easily get to the second level in the running game. As a pass blocker, he has a nice bend to his knees and packs a terrific punch to knock defensive linemen or linebackers back with great reach.

He has a nice blend of pure power and athleticism with the versatility to play either left or right tackle at the next level. He started right away at VT as a freshman, starting Game 1, he’s consistently improved and last season earned a 95.6 grade from Pro Football Focus.

– Excellent athleticism and the ability to get to the second level

-Keeps his pad level low and has very good balance

– Sometimes gives up on blocks too early

– Can overextend at times

– Stops moving his feet at times

Darrisaw will begin the year as a backup tackle, but could make the jump if either starter is hurt during 2021

Darrisaw has the prototypical build of an NFL tackle at 6’5,315. Since arriving at Tech, he’s put about 20 pounds on his frame with no loss of athleticism, his ability to move out in the running game and get not only to the second level but downfield is terrific.

He’s ascending and hasn’t yet reached his peak effectiveness. Having great reach, he’s able to put defenders backward with a powerful punch but also has good leg strength and power from his lower body.

His ability to get to the second level and excellent understanding of angles in the run game, with the quick feet to get to where he needs to make him a very intriguing prospect for the Patriots. He projects to be a road grader at the next level with the ability to be an excellent pass protector.