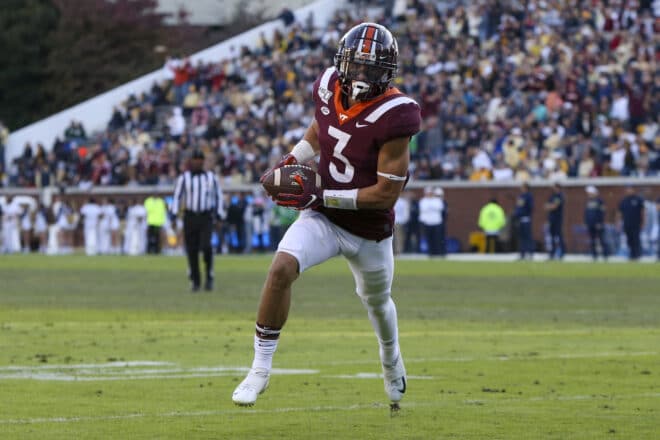 Good morning, here is your Sunday Patriots news 04-04 and Mock Draft 2.0 after the initial wave of free agency is over, the picture is a bit clearer as the team filled many of their holes.

We wish all of our readers a Happy Easter and hope this finds everyone well and surrounded by family.

Cam Newton: The Patriots QB, took part in an offseason throwing session in California with fellow QB Jarrett Stidham and several receivers recently in what was termed a “Pats West” workout, and this week was back in Massachusetts working out with two wide receivers, Jakobi Meyers and Gunner Olszewski for a throwing session at Dexter Southfield School in Brookline, Mass.

These workouts, while lowkey and without any defenders involved are also very important. Newton didn’t have this luxury last spring as he didn’t sign with NE until late June. With a full offseason as well as these informal workouts, the chemistry between Newton and his receivers should improve a lot this season.

Rex Burkhead – Was shown on video running full out on a treadmill which is an encouraging sign after his ACL surgery. While his cutting ability will be the ultimate test, seeing him run sprints on the treadmill has him trending in the right direction. I still wonder if the Patriots will opt to resign him or bring in a late-round/UDFA rookie.

4th & 2 Podcast – If you haven’t checked out our PatsFans.com podcast, “Patriots 4th & 2” in a bit, please check it out. Russ, Derek, and I recorded a podcast yesterday where we were joined by Miguel Benzan, @Patscap.

With the initial wave of free agency in the books, the needs of the Patriots have obviously changed somewhat and many of the holes that plagued the roster have been filled. The team still needs a QB. Attempts to trade up for one of the top draft picks were considered too expensive and with the top 5 QB prospects taken before the Patriots selected at #15, it was time to look farther down in the draft.

We rolled the dice that QB Kyle Trask, who we have with a higher ceiling than the other QBs still available, Kellen Mond, who is much more athletic but incredibly inconsistent, and who completed just 35 percent of his throws outside the numbers (courtesy of NFL.com’s Lance Zierlein). Davis Mills, who checks most of the blocks is still somewhat of an unknown because of a lack of experience, and Jamie Newman, who opted out of 2020 and at the Senior Bowl, had a very forgettable week.

The rest of our picks and a brief bio of each is written below. 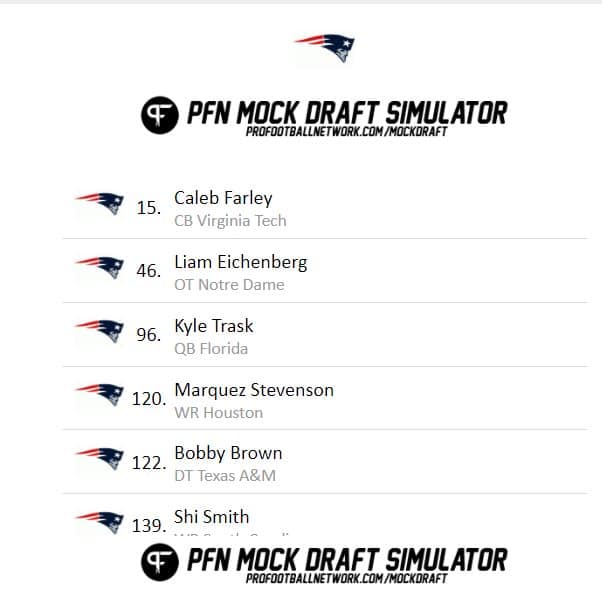 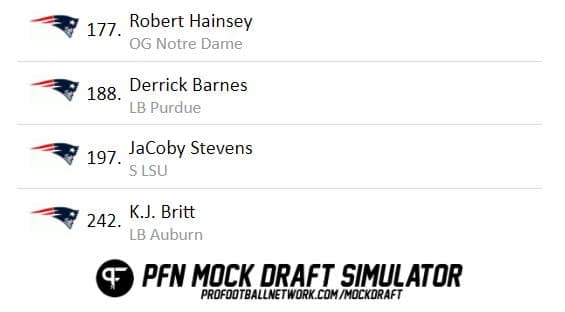 1st Round, Pick #15 Caleb Farley, CB Virginia Tech: Farley is an excellent-sized cornerback (6’1, 207) with outstanding speed and ball skills. He’s physical and does a terrific job getting his head back around and locating the ball in the air. Outstanding closing speed, and changes direction easily.

He can be overaggressive at times but he has the size, speed, and athleticism to be an excellent cover corner. And with the rumors of trading Gilmore, he could be waiting in the wings to take over.

2nd Round, Pick #46 Liam Eichenberg, OT, Notre Dame: Was pleasantly surprised to find him still available at #46, we expected he’d be gone in Round 1. Proto-typical size, (6’5, 305), he has excellent technique and was a starter for 37 games for the Irish at left tackle.

He has excellent hand usage and anticipation. He’s got very good pad level and power in the running game. He’s a still for mid-Round 2

3rd Round, Pick #96 Kyle Trask, QB, Florida: New England needs a QB and they could have a steal at #96. Trask was always the second fiddle back to high school where he was a backup. But he’s never wavered in his confidence and had a tremendous final two seasons at Florida.

We wrote a detailed draft profile on him, that posted last week and can be read here:

Stevenson was a big-play threat with his speed at Houston, and could, with time and coaching, develop into a nice vertical threat. He tracks the ball well, always seemed in sync with his QBs, and makes the difficult catches. Looked strong at the Senior Bowl.

He’s not just a 3-4 NT, he can stay on the field as a 4-3 DT, and besides stopping the run, he had a very good ability to penetrate and had 5.5 sacks and 7.5 tackles for loss (TFL) in just nine games for the Aggies.

5th Round, Pick #139, Shi Smith, WR, South Carolina: Smith is another undersized slot receiver who was a go-to guy at Columbia, with excellent short-area quickness, strong hands, and the ability to run back kicks.

He can make the tough catches and has the savvy and quickness at the line to create separation. While not a deep threat, per se, he can get open deep and is a good vertical threat. He’s fearless across the middle. He shined at the Senior Bowl and with the right coaching at the next level can be another versatile player.

5th Round, Pick #177, Robert Hainsey, OG, Notre Dame: Another pick from the Fightin’ Irish, Hainsey is a 6’4, 305 right tackle who projects to the interior offensive line at the next level. He’s tough, durable and despite limited athleticism for tackle in the NFL, he moves well for a guard.

Hainsey more than held his own when playing at guard at the Senior Bowl. Tony Pauline said this: “As an early-to-mid Day 3 pick, he projects well as versatile depth with scheme-specific starting potential at guard. Teams like the Baltimore Ravens, Pittsburgh Steelers, Minnesota Vikings, and New England Patriots, would acclimate Hainsey schematically, while also potentially providing avenues to break through the lineup.”

6th Round, Pick #188, Derrick Barnes, LB, Purdue: Barnes is an underrated linebacker who plays with an edge on the field. He’s an excellent run-defender in the middle of the defense, offering nice blitzing capability.

Barnes is one of those sneaky good players, who offers versatility (very good STs player), who could work his way into the starting lineup in the right spot.

6th Round, Pick #197, JaCoby Stevens, S, LSU: Stevens is a good-sized, physical safety who is at his best in the box. He’s smart, has a strong work ethic, and is at his best when he keeps the play in front of him and plays downhill.

At 6’2, 230, he’d be a nice addition for the dime linebacker/safety hybrid that the Patriots like to use. He has STs upside…always a plus.

7th Round, Pick #242, K.J. Britt, LB, Auburn: Britt is a tough, inside or middle linebacker who excels at the downhill, run-stuffing aspect in the front seven. While not a very fluid defender in pass coverage, his instincts and aggressiveness would give him a very good chance at making a team, as well as his straight-line speed which would immediately get him the ability to earn STs reps.

He tore a thumb ligament which required surgery and his last season was cut short. But he performed very well in the Senior Bowl and was voted the American team’s top linebacker voted on by the OL and RBs that had to face him.

I like most of the picks particularly the positions. I think adding a C makes sense and would love FB Ben Mason. I could see him replacing Johnson and Vitale.

Damn…seems very lackluster to me..although the college year was so screwed up I didn’t follow like I usually do…IMO they need to be bold in a bid for a QB…