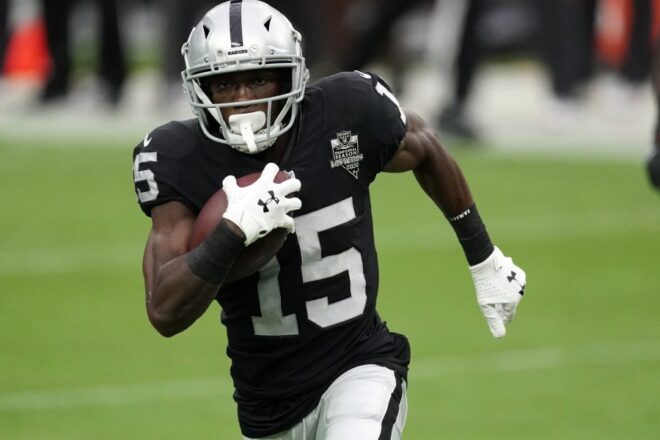 The New England Patriots have added another weapon for their offense, agreeing to a two-year, $26 million deal, with former Las Vegas Raiders wide receiver Nelson Agholor according to ESPN’s Adam Schefter.

Earlier on Monday, the Patriots added tight end Jonnu Smith agreed to a four-year, $50 million contract including $31.25 million guaranteed, according to his agent Drew Rosenhaus.

The Patriots lacked weapons at wide receiver and tight end, and now they’ve addressed their needs in the early hours of legal tampering but are no means done, especially with more time in free agency and the NFL Draft looming next month.

Agholor was a first-round draft pick of the Eagles in 2015 and was generally considered a disappointment in five years in Philadelphia with a penchant for drops.

However, he spent the 2020 season with the Raiders after signing a one-year, $1,047,500 million prove-it deal last March. Moving on to Las Vegas was a rebirth for Agholor who scored touchdowns in eight of the Raiders 16 games, including a career-high 896 yards on 48 catches with an impressive 18.7 yards-per-catch average

Agholor is still young and turns 28 in May is hoping that last year had turned the corner for himself and will be looking to carve out a role for himself in Josh McDaniels offense with Jonnu Smith. The Patriots also agreed to a deal with former 49ers receiver Kendrick Bourne on a three-year, $22.5 million deal, according to NFL.com’s Ian Rapoport. Bourne had 49 receptions for 667 yards and two touchdowns last season in San Francisco.

While we must remind ourselves that it is only March 15 and none of these players have taken the field yet, the Patriots …on paper have definitely upgraded their needs on offense. With Agholor, Bourne, and Smith joining Julian Edelman (if he can go one more time), Jakobi Meyers, and N’Keal Harry, the passing game should be much improved.