2 years ago at 10:51 am ET
Follow @IanLogue
Posted Under: Patriots News 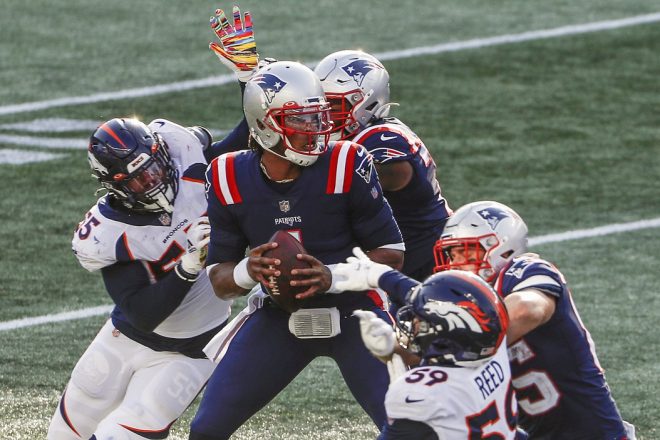 1) Friday’s news of Cam Newton rejoining the team was surprising, but it likely also means that the Patriots may not be sure what their long-term plans are just yet.

They could still be exploring their options and if it potentially involves a trade, this at least provides them with a little bit of leverage.  With Newton back in the mix, they’re also now a little less desperate and have the ability to walk away from a deal and be OK if other teams were looking for a high price.

Speaking of which, much of the talk over the past couple of weeks has centered around the potential return of Jimmy Garoppolo and Newton’s addition could signal that the 49ers may have resigned themselves to giving Garoppolo one final season, and now will instead turn their attention to other needs.

Evan Lazar recently reported that the Patriots did reach out to San Francisco but were told Garoppolo wasn’t available.  That makes sense since getting rid of Garoppolo, who is 22-8 as a starter, without an upgrade would be a risky move.  Kyle Shanahan likely also knows he’s got a good team in place and he’s already made it to one Super Bowl with his QB, so he appears to potentially be sticking to that decision.  Obviously, that could change depending on how things ultimately play out, but barring any changes, Newton’s addition now insulates the Patriots from heading into 2021 with just Jarrett Stidham and Brian Hoyer.

It’s not ideal, but the options thus far haven’t exactly been overwhelming.  All we know is that this isn’t a long-term fix and truthfully if Newton can get back close to the level he was at the start of last season before things came off the rails, it’s not completely impossible that he could surprise everyone.

Then again, one factor to keep in mind is there will likely be fans in Gillette Stadium next season.  As a result, the silence Newton enjoyed last season won’t be a luxury this time around if he struggles again in 2021 and history has sort of shown that he doesn’t respond all that well in those situations.  Needless to say, it should be interesting but let’s hope he’s a different player if he’s under center to start the year.

2) ESPN recently ran a free agency simulator and there were some interesting names that they brought up as to who New England could be adding this offseason.

One of their first signings is the addition of Lion’s wide receiver Kenny Golladay to a 5-year, $105 million ($50 million guaranteed).  Golladay has been a solid player over the last few seasons, totaling over 1,000-yards in 2018 and 2019 before a hip flexor injury limited him to just five games last season.

It sounded like an extension might have been coming in Detroit, but that situation seems like it changed following the firing of GM Bob Quinn in November.  Instead, he’s heading into free agency and the idea of him landing in New England is intriguing.

The next signing is the addition of Titans free-agent tight end, Jonnu Smith, who they predict will sign a 4-year, $42.5 million ($25 guaranteed) contract.

When it comes to versatility, Smith certainly checks that box.  He’s been a terrific player, including catching a career-high 8 touchdowns in 2020.  He also played some snaps as a running back for Tennessee, rushing six times for 82-yards long with a touchdown over the previous two seasons.

Some had thought that the Titans might franchise Smith, but they instead appear ready to let him test free agency and the idea of him landing in New England probably wouldn’t be the scenario head coach Mike Vrabel hopes might play out.

From there, they also have the club adding Ravens free agent edge-rusher Yannick Ngakoue, who they believe will get a 4-year, $60 million ($30M guaranteed) deal.

The idea of adding Ngakoue is interesting.   The 25-year old seems like a Bill Belichick type of player and he’s been productive for Baltimore.  He finished last season with 8 sacks along with one pass defended and four forced fumbles.

I think it’s safe to say most people here in New England would be OK with these additions and it should be fun to see if any of them ultimately end up here.

3) It sounds like the Dolphins could be going after several key free agents this offseason, which they did last year as well.

According to the Miami Herald’s Barry Jackson, players this time appear to be Adam Butler, David Andrews and Lawrence Guy.

Jackson reported that the Dolphins are interested in all three players, with head coach Brian Flores obviously familiar with each of them during his tenure here.

He also believes the Dolphins could make a run at Deatrich Wise Jr. on defense and possibly quarterback Brian Hoyer, who they believe would be a good back up to Tua Tagovailoa.

Jackson does mention James White and Rex Burkhead and he believes White could be an option but cites his drop-off in production.  White to the Dolphins does make sense given the fact the Patriots just resigned Newton, who was behind that drop-off, as well as the fact White’s mother – who was badly injured in the same car accident that took the life of his father – also lives in the area.  He’s not sure about Burkhead considering the uncertainty coming off of his knee injury.

John Simon was another name mentioned, but Jackson believes the Dolphins ‘could do better”.

4) The Patriots did make another signing, with Mike Reiss reporting on the team keeping one of their special teams specialists in the fold.

According to Reiss, New England re-signed Justin Bethel to a 3-year, $6 million deal.

Given the emphasis the team places on special teams, it’s good to see Bethel being brought back.  With Matthew Slater set to return, this move further solidifies that group heading into next season.

Bethel originally signed with the team midway through the 2019 season and he’s been a reliable player, playing in each game over his last two seasons.  The 30-year old was originally drafted in the 6th round (177th overall) back in 2012 by the Arizona Cardinals.

5) There was a disturbing report in the Boston Globe on Friday about sports gambler Benjamin Tucker Patz, who apparently threatened several professional athletes, which also included Patriots players.

According to the Globe, Patz lost a $100,000 Super Bowl bet on the Los Angeles Rams in 2019, which led Patz to threaten a pair of unnamed Patriots players.

The report said that Patz threatened to “rape and murder their families” and that threat apparently wasn’t an isolated incident.  He reportedly also threatened four players from the Tampa Bay Rays and one from the Chicago White Sox after the Rays lost a home game in July 2019 to Chicago, which led to Patz threatening to “enter the athletes’ homes and behead them or their family members.”

Fortunately, Patz faces five years in federal prison after pleading guilty in Tampa federal court to transmitting threats in interstate or foreign commerce.  It’s definitely disturbing news and hopefully, he ends up locked up where he belongs.