2 years ago at 7:00 am ET
Follow @IanLogue
Posted Under: Patriots News

1) While I fall into the category of those who would like to see Jimmy Garoppolo return to New England, I also fall into the camp where I’m just not sure if it happens this year.

I know Greg Bedard said in a recent podcast that he believes Garoppolo is New England’s “Plan A” at quarterback, and I have little doubt that Bill Belichick wouldn’t jump at the chance to bring him back to New England.

At the same time, I also believe that there’s no way 49ers head coach, Kyle Shanahan, makes that move without heading into 2021 with a viable starting quarterback.  People can say what they want about Garoppolo, but when he’s been on the field, he’s won football games.  Shanahan has to know that Garoppolo’s record (22-8) speaks for itself and finding guys who know how to win isn’t as easy as it looks.

Having already made it back to a Super Bowl with Garoppolo under center, I just don’t believe Shanahan will take the risk of parting ways with the embattled QB without knowing he’s got someone else on hand to help him get another shot.  In the NFL, coaches are judged by wins and losses and the 49ers front office won’t care two years from now about anything else.  They know they’re close.  Injury history or not, they already have the guy who knows how to get them back there.

We’ve heard talk about Teddy Bridgewater and Sam Darnold, but it would be surprising to see them jettison Garoppolo in favor of either of those two for the sake of moving him.  Bridgewater has had a nice resurgence but he’s a bigger question mark than Garoppolo, and Darnold is a player where you don’t know if he’s really anything more than he’s already been.  At least not enough to confidently replace Garoppolo with him.

The most obvious scenario would be for San Francisco to get in on the Deshaun Watson sweepstakes, but it would be surprising if Nick Caserio doesn’t require Garoppolo as part of that deal given that if Watson goes to the 49ers, Houston would also still need a quarterback.

At that point, the only thing that might work out would be if Garoppolo refuses to go to Houston and picks Belichick above anything else.  That would certainly be an interesting situation and again, there are so many dominoes that need to fall that I just don’t know how the end result is Garoppolo starting in New England in 2021.

My feeling is, barring Watson going there, it feels like they’re going to ride out what should hopefully be a motivated Garoppolo heading into 2021.  If he goes out and has another season like the one he did in 2019 (and San Francisco makes a run) then all will likely be forgotten.  If he doesn’t, then a move next season would seem more likely.

For now, while John Lynch is on the record refusing to commit to Garoppolo in 2021, Shanahan is in a situation where there’s too much on the line with the group of players he currently has.  He’s got enough talent where with Garoppolo, the chances of him being in the mix next January seems like a very real possibility.

The fact is, Garoppolo’s history when he’s been healthy has been too good to just let him walk.  So unless someone better becomes available, I just don’t see Shanahan being crazy enough to let him go.  He’s the one who seems to be in control right now, and he knows one key thing that changes all of that is losing football games.

Mike Reiss wrote in his Sunday column that the Patriots need to get aggressive if they really want him back, but the end result remains the same.  San Francisco still needs a quality replacement and it’s tough to put much stock into any other name, other than Watson, being thrown around for that to happen.

2) Staying on the quarterback train, Bedard is also high on Gardner Minshew as a potential possibility for the Patriots but Minshew is one of those guys who while being fun to watch, hasn’t yet proven he’s a guy who can win consistently in this league.

Coming up short was sort of his mantra in Jacksonville, although he played well enough for the front office to cut ties with Nick Foles after one season.  The one bright spot is the fact he appears to be a player who is well-liked in the locker room and that made up for whatever shortcomings he’s had out on the field.

The one big thing with Minshew is the fact he’s done a good job protecting the football, having thrown 37 touchdowns and just 11 picks during his first two seasons in the league.

However, the killer with Minshew is he hasn’t been able to play well at the end of games.  His lowest completion percentage last season came in the fourth quarter, where he completed just 60% of his passes, which was also a problem in his first season where he had a percentage of 56.3% in the final quarter, also the worst of any other quarter for him that season.

In fairness to Minshew, he was behind in a lot of those contests and when teams know you’re going to throw the ball, it’s just that much harder to be successful.  Watching Josh McDaniels potentially work his magic might be fun, but aside from being an interesting addition, Minshew is a player I’d have a hard time hitching my wagon to.

Then again, as Bedard mentioned, the scenario would involve adding Minshew and drafting someone behind him.  I think most people would settle on that outcome if they run out of options, and the Patriots might at least have more of a shot of having a viable passing game than they did in 2020.

However, since the overall goal is winning a Super Bowl, it’s just tough to envision Minshew playing a meaningful game in February.  Although, if Belichick really wanted to stick it to everyone, doing it with another unlikely former sixth-round draft pick would certainly be an interesting way to go about it. 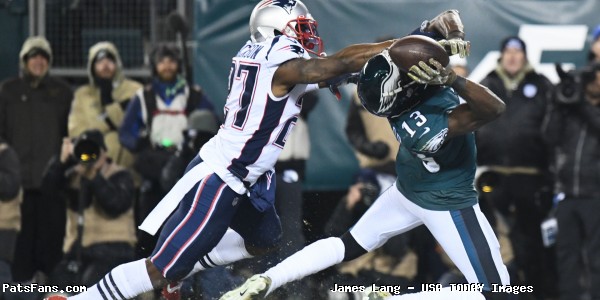 3) Meanwhile, Reiss had another bit of good news on Sunday when he reported that Jason McCourty has been working out at Gillette Stadium in recent weeks.

According to Reiss, McCourty, who is set to be an unrestricted free agent this offseason, is also reportedly planning on playing in 2021.  Given the type of player he’s been since he got here, one would have to believe that New England would want him back for another year.

Better yet, with his brother still in the fold, barring an offer that would change his mind, it’s also hard not to think he’d want to continue his career with the Patriots in 2021.  When you take into account the uncertainty surrounding Stephon Gilmore and J.C. Jackson, keeping McCourty definitely makes sense.

Jackson, who is a restricted free agent, is likely to get a first-round tender but there has been some speculation another team could throw a wrench into that situation.  The thought process seemed to be that his emergence could make Gilmore expendable, but losing him could instead put New England in a tough spot.

As a result, March is about to be an interesting month and I’m definitely curious to see how it all unfolds.

4) With speculation swirling on the future of Drew Brees, I feel like there’s a reason why he hasn’t announced his retirement yet.

Seeing Tom Brady go out and win a championship has to be absolutely killing him, especially since it was Brady and his Buccaneers that likely left him with an emptiness that he may not yet be ready to face.

Let’s not kid anyone, it also has to sting that Brady finally passed him as the all-time NFL touchdown record holder, taking away one of the lone accolades he had held over the future Hall of Fame QB.   Worse yet, he’s probably going to put even more distance between them next season and possibly longer.  While Brees may not admit that it bothers him, at the same time, he’s still a competitor and it has to be disappointing.

After all, it’s pretty amazing that Brady is still playing at this level and he certainly made it look easy.  As a result, Brees is probably in the mindset that if Brady can continue playing at a high level at this age, so can he.  He’s been spotted working out in recent weeks, which is why some believe he could be pondering one more year.

The two shared some good moments following that contest and it’s possible Brady could have given some words of encouragement that might be causing Brees to be thinking about coming back for one more season.

Whether or not that comes back to bite him (Brees was 2-0 against him in the regular season in 2020) remains to be seen, but the fact Brees hasn’t made an announcement is curious and I wouldn’t be surprised if he puts off his retirement for at least one more year.

According to Ben Volin of the Boston Globe, the Eagles would save $8.25 million in cap savings with a post-June 1 release but a trade would obviously also help their situation.  The 30-year old is definitely on the downside of his career but would be a solid addition to an offense that hasn’t had any real production at that position in the past two seasons.

Adding Ertz would also bring in a proven player to potentially make last year’s draft picks Devin Asiasi and Dalton Keene more productive in 2021.  The big question now will be the asking price and whether or not the Patriots will get into the bidding.

If the price is right, they should at least consider it.  NBC Sports Boston’s Tom Curran said a few weeks ago that he expects them to be aggressive this offseason when it comes to revamping the roster.  Adding Ertz would definitely be a good start.

If SF gives up on Jimmy Garoppolo with all the offensive weapons it has around him why would NE think he’d be a good choice sans the weapons?