2 years ago at 9:59 am ET
Follow @IanLogue
Posted Under: Patriots News

Some Patriots and NFL News and notes for this morning:

1) For anyone hoping to see Russell Wilson slinging passes in Foxboro next season, it sounds like that won’t be an option.  The quarterback revealed a list of teams he would be willing to be traded to on Thursday and New England wasn’t among his choices.

According to ESPN’s Adam Schefter, the teams he’s apparently willing to be traded to reportedly include the Cowboys, Saints, Raiders and the Bears.

Wilson has expressed frustration with the state of the team along with not being included with some of the major personnel decisions.  His other issue apparently goes deeper than that, with an apparent rift growing between Wilson and head coach Pete Carroll, who Wilson is seemingly frustrated with his conservative style of coaching and believes it’s also holding him back personally.

Per a report in the Athletic:

Carroll believes that formula in his bones, and over and over again he has won while implementing it. In contrast, Wilson believes that Carroll’s conservative philosophy is limiting his production and, by extension, his ambitions to be one of the game’s all-time greats.

Wilson at one point said that he’s frustrated with not being considered among the best of all time, and he blames the team’s overall style of play for keeping him from getting there.

“I’m trying to break away, you know what I mean?” Wilson said at one point early in the season, then named the shadows he was chasing: Brady, Brees, Manning, Montana.

As a result, it remains an interesting situation and one that could potentially see another quarterback change rosters this offseason.

2) Mel Kiper recently released his latest Mock Draft, and he believes the Patriots will move up to try and fix their QB situation.

According to Kiper, he sees them trading into the top 10, making a deal with Denver for the #9 overall pick for QB Trey Lance.

Bill Belichick is known more for trading down in drafts, but the Patriots traded up a couple of times on Day 2 last year to get guys they wanted in Josh Uche and Devin Asiasi. Don’t rule out a big move if Belichick & Co. want to get their quarterback of the future.

He believes that at just 20-years old, Lance has all the tools to be a great dual-threat quarterback in the league and if they can add him, as well as get some of the players who opted out last season back, it wouldn’t be long before the Patriots are back in the mix for the AFC East.

Lance is a terrific player, and he’s certainly got the prototypical size for a QB.  He’s 6’4″ and he’s got decent speed.  He’s also careful with the football and even finished the 2019 season with 28 touchdowns and no interceptions.  However, Belichick is more known for trading down than up and when he’s moved up, it’s typically been later in the round.  Obviously, there’s a little bit more of a potential sense of urgency this year, so things could change.  If it does, Lance does seem like a good option.

3) Things are opening up even more in Massachusetts as the state continues with Coronavirus vaccinations, and it may not be long before people are able to be back in attendance at Gillette Stadium.

Stadium officials announced on Thursday that following the Governer’s decision, it looks like fans now finally have something to look forward to.

From the Patriots Offiicial site:

“On a day that we reached a milestone by administering the 100,000th vaccination for COVID-19 at Gillette Stadium, we are thrilled to hear Governor Charlie Baker’s announcement that the Commonwealth of Massachusetts is officially transitioning to Phase IV beginning March 22, enabling large capacity venues throughout the state to host fans in 2021. This step represents the progress vaccinations are providing to minimize the risk of infection through herd immunity. It is an important step toward a return to normalcy for fans of the New England Revolution and New England Patriots and provides a sense of optimism for a much brighter future ahead.”

I’m sure I’m not alone in saying it’s been an incredibly long year so this is certainly good news.  Hopefully, things continue to progress and it will definitely be fun having fans back in the stands in 2021. 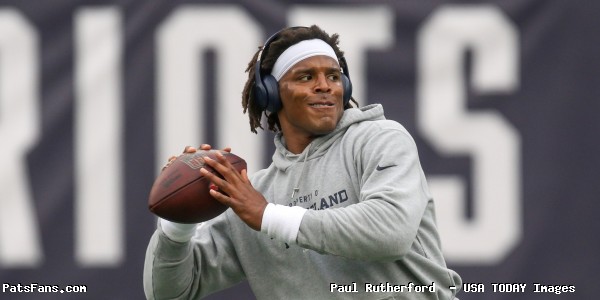 Could Newton replace Garoppolo in San Francisco next season?

4) Out in San Francisco, one writer is making a little bit of noise suggesting that Cam Newton should be in consideration as a possible option to replace Jimmy Garoppolo.

Marc Delucchi of 49ers Wire wrote in a piece that appeared in Yahoo! Sports that the two players are more similar than people seem to think, and given what will likely be a staggering difference in cost (Garoppolo’s base salary is a reported $24.1 million for this season), it’s a move that also makes financial sense.

Newton only amassed 8 touchdowns and 2,657 yards through the air in New England this season. However, he ran for nearly 600 yards and 12 additional scores. It’s easy to dismiss Newton because of his 8-10 touchdown to interception ratio in 2020, but it’s disingenuous when he ran for the fourth most touchdowns in the NFL to ignore the run game in comparisons.

The most impressive part of Newton’s performance has been his ability to avoid negative plays. Mobile quarterbacks are often more prone to fumbling and taking drive-killing sacks, but Newton has fumbled, thrown interceptions, and taken sacks at a lower rate than Garoppolo since 2018.

While Delucchi may make some good points, it doesn’t change the fact if Newton doesn’t fix his issues throwing the football, he doesn’t seem to make a lot of sense in Kyle Shanahan’s offense.  That’s also the reason why fans aren’t excited at the prospect of him returning to the Patriots either.  But it was an interesting take that tells you people out in San Francisco appear to be losing faith in Garoppolo, who definitely appears to be facing a crucial season.

5) We’ll leave you with this funny bit of information.  According to the Las Vegas Review Journal, large bets have apparently been placed on the Jets to win the AFC East, as well as the AFC and the Super Bowl this season.

The initial odds were reportedly at 20-1 and have since dropped to 12-1 to win the division, largely in part by the volume of wagers that have recently come through, which is apparently the biggest shift in odds of any NFL team.

The other theory is that Deshaun Watson will end up in New York, which would instantly make them a threat and would again increase the level of difficulty for the Patriots in the AFC East.

They have the Buffalo Bills as -190 favorites to repeat as AFC East champions, followed by the Miami Dolphins (+320) and New England Patriots (5-1).

By: Ian Logue
Thursday night's New England Patriots loss against the Bills started off with a miscue and then a little bit of hope, but everything essentially went…
7 hours ago

By: Mark Morse
It was a bad look on Thursday night.  The Patriots embarrassed themselves in the 24-10 loss to the Buffalo Bills.  The frustration is starting to…
10 hours ago

By: Steve Balestrieri
But rather than calling two plays during the timeout, they called their third and final timeout. That’s Football 101 stuff
11 hours ago

By: Bob George
If the fact that the Patriots actually forced the Buffalo Bills into three punts is the only real positive of the game, you more or…
20 hours ago