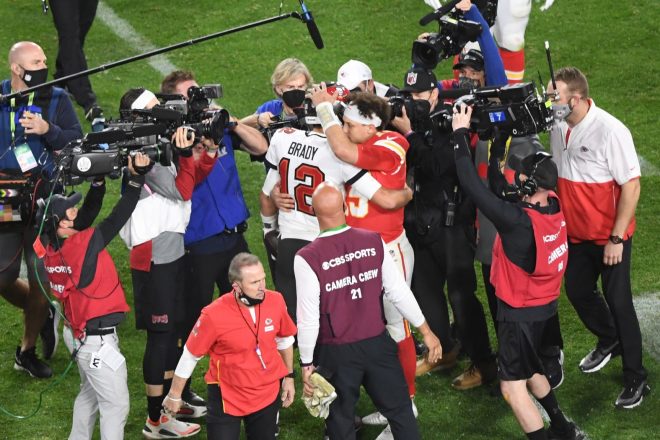 Yet his postseason losses have come at the hands of the player who beat him again Sunday night, with Tom Brady stepping things up a bit since their last playoff showdown.

In that game, Brady came away with an overtime win over the Chiefs where people in Kansas City spent the offseason crying about the unfairness of Brady engineering a 13 play, 75-yard drive in overtime that ended in a touchdown and prevented Mahomes from ever touching the football.

Sunday night, it was never that close.  In fact, Brady was laser-focused from the beginning of the game and even went out and put the dagger in the heart of the Chiefs with just 0:55 left to go in the first half.  Brady marched right down with a 5-play, 71-yard touchdown drive to close out the half to put Brady and the Buccaneers up 21-6.

Meanwhile, Tampa’s defense kept the pressure on Mahomes in the first half, holding him to 9-of-19 throwing the football for 67-yards and just a pair of field goals.

From there, the tone was set.  Kansas City came out in the second half and cut the lead to 12 at 21-9 when they went 7 plays for 47-yards and connected on a 52-yard field goal, which seemed to potentially give them a shot at gaining some momentum.

Instead, Brady drove them right down the field on a 6 play, 74-yard drive that ended with a 27-yard touchdown to put them up 28-9.

That was the knockout blow, and with the game out of hand, it put Kansas City in a position where they became one-dimensional and Mahomes never had a chance.

After the game, he was left completely stunned.

“Obviously, I didn’t play the way I wanted to play, but what else can you say?” Mahomes told reporters after the game.  “I feel like the guys did that. They were the better team today. They beat us pretty good. The worst I think I’ve been beaten in a long time.”

“I mean we just didn’t execute especially on third down and in the red zone. Those are the two most important parts of the field. They were just better than us today. I don’t really know what else to say. They executed at a higher level defensively, they had a good game plan and we weren’t able to make adjustments and find ways to get in the endzone.”

Brady took command and looked right at home on the big stage, with the veteran QB missing just 8 passes all night as he finished the game 21-of-29 for 201 yards and three touchdowns.  On the other side, Mahomes couldn’t get the ball out of his hands and spent most of the evening running for his life.

Sometimes it takes losses like this for players to get to the next level and for the second time, Mahomes finds himself on the wrong end of a postseason defeat to Brady.

The two embraced after the game with Brady telling Mahomes to “keep in touch”, as they clearly have a good relationship despite these outcomes.  He should know, he’s been on the wrong end of losses to a player like Peyton Manning and he likely knows the only way to get over it is to simply get back to work.

Nevertheless, this one stings, but Mahomes will just have to follow Brady’s lead and move on.

“Obviously it hurts right now,” Mahomes said. “It hurts a lot, but we’re going to continue to get better. We have a young group of guys who have had a lot of success and learned from that and have had a few failures and we have to learn from that.”

“We can’t let this define us. We have to continue to get better, going into next year being even better and preparing ourselves to hopefully be in this game again.”